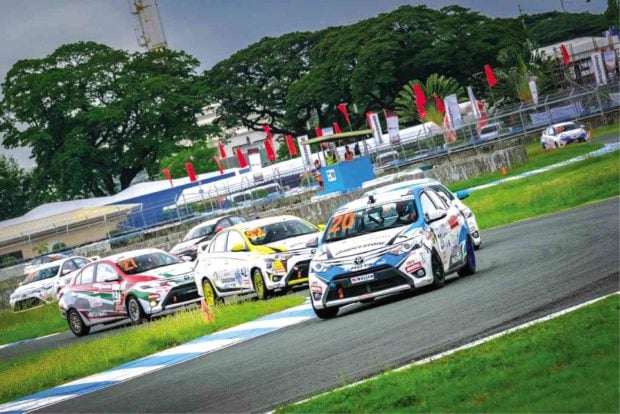 Double points will be awarded to winners of the final leg

The race for the championship will go all the way until the checkered flag drops in the last lap and last race of the Toyota Vios Cup Season 5 this weekend at the Clark International Speedway.

A possible three-way battle between points leaders Keith Bryan Haw and Estefano Rivera, both from Obengers Racing Team, looms, but a lot of other contenders including Toyota Quezon Avenue’s Dominic Ochoa can still pull off a spoiler.

Double points will be awarded to winners of the final leg, giving each race winner 40 points. A total of 120 points is up for grabs in this leg, making the top prize still open to all.

Déjà vu for me. I remember a few years back when my husband was still racing. It was the last race of the season, and he was only hoping to secure his third place overall.

I usually come early to the races, but because of the situation, I thought it was ok to come a little bit later.

When I got to the racetrack, he surprised me with the news that he was gunning for first place after the first and second placers were involved in a crash, and thus, were out of contention.

What this tells us is that anything can happen this week.

Haw, a popular DJ, is ahead of karting champion Rivera with 62 points against the latter’s at 51.

Team orders can come into play since both are racing for Team Obengers, under the team principal Cosco Oben, who leads the Toyota network of Otis, Balintawak, Marilao and North Edsa among others.

But as I mentioned, Ochoa, currently sitting on 45.5 points, can steal the thunder. He has been chasing the elusive championship since Season 1, but has often been derailed by bad luck.

If Haw and Rivera finish at sixth and seventh place, respectively, Ochoa might finally get his chance to win.

The battle for third between Kiko Dysico (53.5) and Victor Buenseseco (52) will make the first two lanes of the grid a war zone.

Another close battle is between class points leader Vincent Courcol of AP Corse and first time Vios Cup racer, Elysse Menorca of Team Obengers, with the latter just 5 points behind.

Menorca, one of the youngest drivers in the series, is followed by Team Cebu’s Clive Fermin with 65 points.

Round 2 winner Diego Loyzaga now sits in third place with a 5-point lead over Round 2 pole sitter Sam Milby, who failed to finish the race after making a mistake in the first race of the street leg.

The Toyota Vios Cup is one of the largest one-make race series in Southeast Asia, and is supported by Bridgestone, Rota, official partner Petron, Motul, TRD, Brembo, AVT, Denso, 3M, OMP, and Tuasonracing.com.

Admission to the Toyota Vios Cup Leg 3 is free. For live coverage, log on to Toyota Motor Philippines Facebook page.