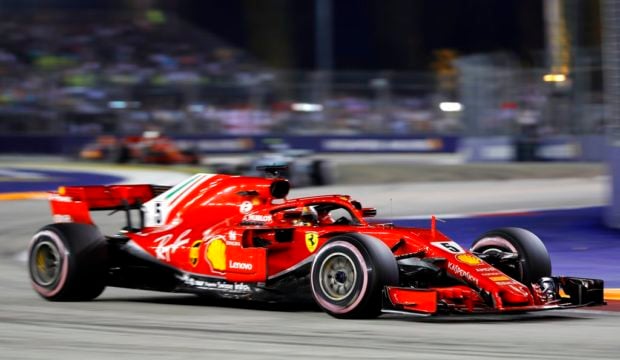 FILE – In this file photo dated Sunday, Sept. 16, 2018, Ferrari driver Sebastian Vettel of Germany steers his car during the Formula One Grand Prix of Singapore at Marina Bay Street Circuit in Singapore. Sebastian Vettel and Ferrari are 40-points behind the lead even though his Ferrari has often seemed the faster car, Thursday Sept. 27, 2018, ahead of the upcoming Russian Grand Prix. (AP Photo/Vincent Thian, FILE)

That’s the key question ahead of the Russian Grand Prix as Vettel enters with a 40-point disadvantage to Mercedes’ Lewis Hamilton even though his Ferrari has often seemed the faster car.

Now Vettel comes to Russia, where the long straights should in theory favor Ferrari. Then again, Ferrari was widely expected to dominate the last two races in Italy and Singapore, both of which Hamilton won.

Vettel seems uncertain of his chances in Russia.

“We expect to be competitive here. Having said that, we need to take into account the races where we struggled to have the race pace,” the four-time champion said Thursday.

The title is still mathematically within his grasp. Even if Hamilton finishes second to Vettel in the remaining six races, the German would win the title by two points.

“We try to give it everything we have. We still believe that we have a chance,” Vettel said. He added that he is “staying in the moment” and thanked fans for messages of support.

“We have races in the past we should have won but didn’t and others we won but shouldn’t have,” he said. “Everything is possible.”

It’s the second season in a row that Vettel has started strongly only for Hamilton to surge in the second half. Last year the British driver won five times in six races from August to October to deal a heavy blow to Vettel’s bid for a fifth title. Hamilton has won four of the last five this time round and hopes he can continue that good form to snuff out Vettel’s hopes.

Still, Hamilton rejects the idea his lead means he has one hand on the championship trophy.

“I don’t think you ever have one hand on it. You either have both hands or you don’t,” he said. “There’s still a long way to go.”

While Valtteri Bottas, Kimi Raikkonen and Max Verstappen could still mathematically become champion, each would need at least four wins from the last six races, something which seems almost impossible.

Winding around arenas from the 2014 Winter Olympics, Sochi’s circuit is barely used outside of F1 race weekends and in the words of Red Bull’s Daniel Ricciardo “feels like driving flat out in a car park.”

The smooth asphalt and generally cool conditions mean tire wear is very low, leaving teams to work out how long the “hyper-soft” tire compound, new for this year, can last on track. The track’s gray backdrop can also make it hard to judge braking and turn-in points.

“It’s a track where the timing is crucial to find the right rhythm,” Vettel said. “Everything looks the same so there’s no reference.”

Pole position isn’t everything in Russia, as Bottas proved last year when he started third and slipstreamed past both Ferraris on the opening straight to win, but it’s hard to overtake.

The big teams have confirmed their 2019 lineups but many drivers remain on edge.

Force India’s Esteban Ocon is targeting a spot at struggling Williams — likely a step back given his eight top-10 finishes this year — but admits he may be forced to skip the 2019 season entirely.

“It could be an option to be on the bench next year, but even if that’s the case I will be back in ’20 and I will be back stronger and prepared,” he said Thursday. “The only thing I look at is Formula One and my only target is to be world champion one day.”

Williams, Force India, Toro Rosso and Haas have yet to confirm drivers for 2019, though some seats seem freer than others. Lance Stroll, for example, is widely expected to switch from Williams to Force India after his father led a takeover of the team last month.

The number of free seats dropped by one Tuesday when Sauber said Ferrari reserve driver Antonio Giovinazzi will partner Raikkonen, with Marcus Ericsson dropping into a reserve role.

Williams driver Sergei Sirotkin said Thursday he was “not hugely concerned about his future,” but remarked that “unfortunately this is Formula One, so you can never be 100 percent certain about anything.”