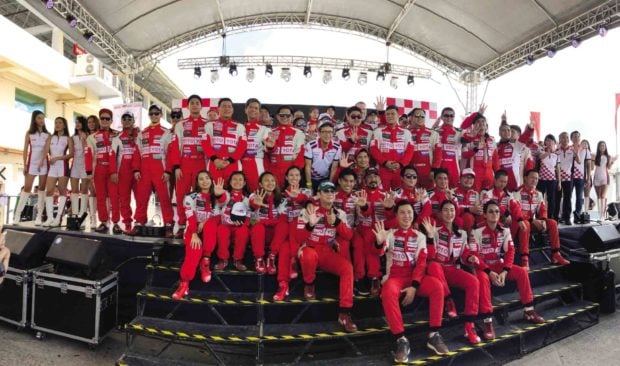 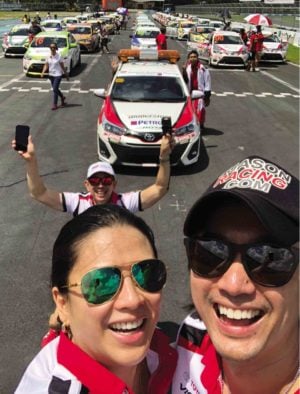 Selfie in front of the grid: me and Series director JP Tuason. Photobomber is Race director Ferdie Ong.

Last weekend’s race proved to be on-the-edge-of-your-seat exciting that I just had to write about it again.

We have been organizing the Vios Cup for 5 years, and never have two seasons been the same. In some, the overall champions would already have secured their titles coming to the last race of the season.

This year, everything was up for grabs.

After the weekend’s event, Series director JP Tuason shared some learnings he had for Season 5 that goes for both racing and life. Here goes.

Coming into the weekend, Keith Bryan Haw was in the lead with Estefano Rivera in second and Dominic Ochoa on third.

When the checkered flag dropped on the last lap of the last race of the weekend, Dominic Ochoa came out victorious for race 8, with Haw in second and Rivera in third.

Learning 1: Never give up because when things look impossible …. Remember, the last leg is always double points.

An incident between Don Vic Portugal and Victor Buensuceso, who was third in championship points, made Buensuceso kiss his chance goodbye on the first race of the first lap.

Red Diwa who was the points leader coming into the weekend, suffered a similar fate, which opened the championship to newbie John Dizon of Team Obengers.

Lesson no 2: Don’t throw it all away on the first lap of the race. There are 11 more before the chequered flag drops.

Female racer Dimple Napat, 25 years old, has been racing on and off the Vios Cup for two years. This year, both she and her team Toyota Dagupan-Team Biskeg committed to making her a winner.

She won both race 7 and 8, besting points leader Vincent Corcul of AP Corse who suffered a hand and wrist injury coming into the last leg, and Parts Pro’s JJ Baredo.

Lesson 3: Surround yourself with people who are better than you, and only have the best intentions. Having a great crew and great team mates already make you a winner.

Team Toyota Cebu flies in from Cebu just to practice for several days before the race. They clock in hundreds of laps just to get the perfect set-up and seat time.

They have consistently landed on the podium, and this year emerged 2018 Best Team!

Lesson 4: Practice makes perfect. That elusive win comes to those who put in time and effort.

Celebrity driver Fabio Ide has been part of the celebrity team since season 1. He is a crowd favorite because he would always be present in all celebrity activities, and never exhibited diva behavior.

He is this year’s champion for the Rota Celebrity Class—always smiling, gracious and humble, win or lose.

Lesson 5: Remember to be a gracious and grateful winner. Not only will you get more sponsors and be well respected on the track, you also end up a winner in life.

The Vios Cup has become one of the biggest race series in Southeast Asia, and is now the premier grassroots series in the country.

It has made globally competitive racers such as Arthur de Jong, who is now racing in the 24-hour Lemans Endurance race in France, and Daniel Miranda, now in Asian Formula Renault.

It has also revived Philippine motorsports.

Toyota Motor Philippines has given people a venue to fulfill their dreams, and this includes ours—from staging a street race in Cebu, SM Mall of Asia, and Filinvest, Alabang to having an opportunity to give all Filipino racing enthusiasts a chance to participate in a world-class competition that has inspired other countries as well.

We want to thank Toyota and the sponsors of the Vios Cup, Bridgestone and Rota, and official partners Petron, Motul, TRD, Brembo, AVT, Denso, 3M and OMP for a great five years.