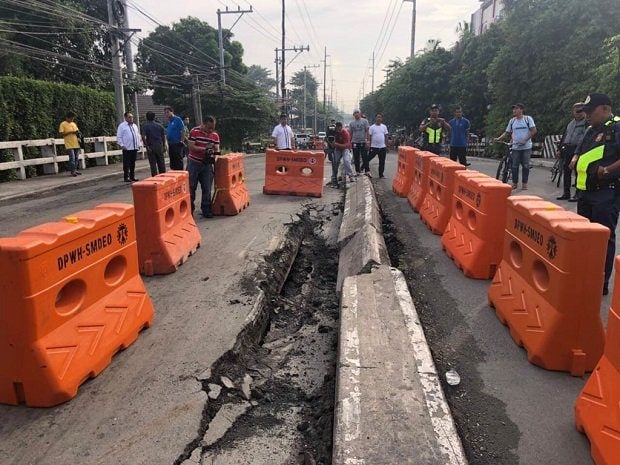 Journalists and local authorities mill around the damaged portion of the Otis bridge in Paco, Manila. INQUIRER.NET / FAYE ORELLANA

Six bridges in Metro Manila have been closed for repairs since February, causing heavier traffic congestion as the holiday season nears.

According to Melvin Navarro, National Capital Region director of the Department of Public Works and Highways (DPWH), the six bridges — Sevilla, Quirino, Otis, Old Sta. Mesa, Nagtahan and Tripa de Gallina — have reached “Type 4” conditions, which require immediate rehabilitation either because the span is over 50 years old or has been structurally weakened by heavy vehicular load.

Navarro explained that the DPWH had always made prior coordination with Metropolitan Manila Development Authority (MMDA) regarding traffic management before any bridge is closed for upgrade or repairs.

This year, however, due to other ongoing infrastructure projects in the capital, alternative routes may not be able to accommodate vehicles diverted from the bridges, he said.

With the closure of Quirino and Otis bridges, the MMDA has advised motorists to instead take Quirino and Taft Avenues. Both bridges have a combined daily volume of 10,000 vehicles.

Due to the closure of Sevilla bridge connecting Mandaluyong and Manila, F. Blumentritt Street in San Juan City has been designated as an alternate route for motorists.

Unfortunately, they will have to share it with those affected by the closure of two other bridges: Old Sta. Mesa and Nagtahan.

MMDA traffic engineering director Neomie Recio admitted that they were hard-pressed to come up with alternate routes as the metropolis’ road network remains at 5,000 km.

“What’s happening is that you are closing more routes than you are making,” she said. “The closures don’t just affect their immediate vicinity. There is a domino effect across Manila.”

Navarro, however, said the DPWH was doing all it could to speed up the repair of the bridges so that these could be reopened as soon as possible. – By: Krixia Subingsubing