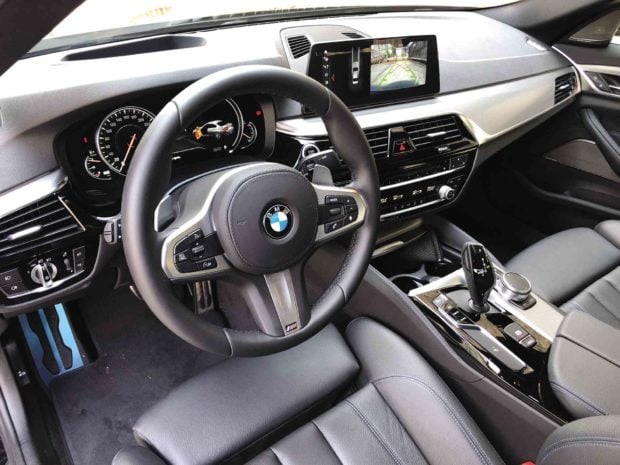 The cockpit has the latest electronic wizardry for greater efficiency.

You know that something is done well when it all seems so effortless. Case in point is the BMW 5 Series sedan.

The styling hits the spot, being bold and at the same time more in the classic style—something that will still look good five years from now.

When we first walked up to the 520d for this test drive, we had to look twice to make sure we weren’t picking up a 7 Series.

The 5 Series now nearly reaches the 5-meter mark at 4,935 mm, but looks even bigger—particularly in length.

By design, the 5 was made to look long and low-slung. A long wheelbase is complemented by short overhangs.

Settling into the 5’s driver’s seat is like saying hello to an old friend; getting into the groove is smooth and easy.

The thick-rimmed steering wheel is satisfying to grip, and it comes with a discreet “M” badge on the upright spoke.

The center console and large touchscreen are canted towards the driver. It’s a reminder that the 5 Series’ unique selling point is that it is, yes, a midsize sedan capable of ferrying four passengers in comfort, but that it is, above all, a driver’s car.

Pushing the start-stop button fires up what is the most practical engine in the lineup: the 2.0-liter diesel engine.

The four-cylinder turbocharged unit generates 192 ps, and more importantly, 400 Nm of torque. This engine performs well in the smaller BMW cars like the X1, so we were interested to see how it would deal with the mass of the 5 Series.

At the risk of repeating myself, it was effortless. The torque peak occurs at just 1,750 rpm, allowing easy acceleration from standstill.

Riding the 5 Series is now quite comfortable, a tribute to the chassis engineers who have smoothened out what was once a quite firm ride a couple of generations ago.

Overtaking prowess when on the go was just as quick, making easy work of zooming past traffic.

The 520d, like many cars these days, can be switched from Economy to Sport mode. In this case, there were three modes named Eco Pro, Comfort, and Sport, in rising order of responsiveness and also fuel consumption.

The differences between the three were not as pronounced as they were, say, in the X1, or in BMW-engineered vehicles like the MINI Countryman.

We left it pretty much in Eco Pro mode, letting the computer detect when we needed more oomph, with the torquey diesel dishing out enough acceleration even in Eco Pro.

Some of the switchgear in the 5 Series proved to be distinctively driver-unfriendly, a pity given the effort to please in other areas.

The drive mode was particularly hard to decipher by touch, with the flat three-way button providing no tactile feedback. We had to glance down to even find the control.

The gear selector is another bit of why-tech, with the purely electronic selection from drive to reverse and park, and any combination thereof, hard to quickly engage without having to use awkward combination of thumb presses and tilts of the stubby selector.

The iDrive has improved in functionality, but we’re not a fan of the tiled layout on the 520d’s central screen.

In its favor, the 10-inch screen has clear graphics and can be read even in bright sunlight.

It’s amusing to note that BMW has returned to turn signals and wiper controls that lock into place, the way that God always intended, instead of springing back to the center even as the function is still active.

All well and good, but years of contrary behavior have led us to expect the opposite from BMW, so now we have to get used to the old ways again.

Small niggles, those, but all easily forgotten once you get settled into the 520d and its driving character.

The 5 Series is now quite comfortable, a tribute to the chassis engineers who have smoothened out what was once a quite firm ride a couple of generations ago.

You could almost be fooled that you were driving a Mercedes E-Class; it initially feels that soft.

The steering, too, is very light. Hardcore BMW owners might complain, but the lightness does make driving all day in heavy traffic an easy task. Switching to sport mode brings back some of the heavier steering feel.

This might signal that the 5 Series has gone all soft and wooly. But when you get the urge to go fast, the 520d seems to flip some hidden switches.

The sports sedan side of the equation then comes to the fore. The steering feels precise and obedient, the chassis taking as much pleasure from hard driving as the guy or girl behind the wheel. Note that this is the same chassis that can deal with the 606 ps of the M5.

At the end of the day, the 5 Series has gone in the direction of greater comfort and efficiency.

Electronic wizardry from the 7 Series, like a head-up display and the gesture control for the audio, is on board.

It’s a car with a big cabin and a huge trunk that can swallow full-size luggages with ease.

But belying the 520’s size and newly-found easygoing feel is a car that feels nimble and happy to take corners at high, almost foolish speeds.

At the end of the day, the 5 Series is still the driver’s car in this segment. We can sleep well tonight.