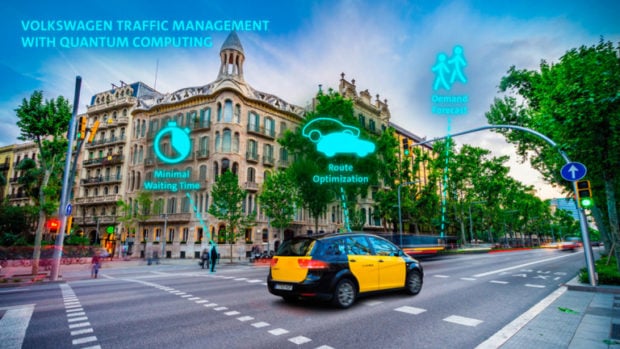 With this information, “public transportation organizations, taxi companies and transport service providers will be able to deploy their fleets considerably more efficiently while minimizing wait time for passengers.”

The benefit of using quantum computing for such a complex task is its speed and an enormous capacity to crunch extensive datasets. Supercomputers are often not advanced enough to use such immense volumes of information to develop an optimized solution, so quantum computers are currently the best option to forecast traffic volume, transport demand and travel times.

In the case of traffic optimization, Volkswagen’s process consists of two main steps: the analysis of anonymous user movement data with conventional computers and the optimization of traffic flow thanks to predictive analytics with quantum computers.

If machines can simultaneously predict what vehicles are doing and where their final destinations are, traffic can be organized and managed to move faster, safer and more efficiently. This could considerably reduce excessive passenger wait times, vehicle shortages and barren public transport routes.

The group intends to test the algorithm in Barcelona where the traffic database is abundant.

Volkswagen is presenting this project, along with D-Wave, the quantum computing company providing Volkswagen with quantum computers for the project, at the Web Summit tech conference in Lisbon, underway now. KM

Volkswagen to end production of iconic ‘Beetle’ cars in 2019

Volkswagen PH announces November availability of the Santana AT, Santana GTS, and Lamando