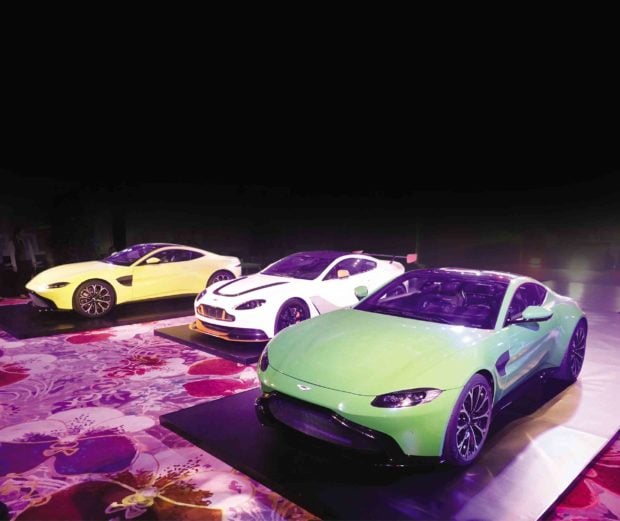 The sporty Vantage has a well-contoured clamshell hood and well sculpted side flanks.

Aston Martin Manila launched the all-new Vantage sports car. The Vantage is a two-seater powered by a 4.0-liter twin-turbo V8 capable of 510ps and 685 Nm.

Mated to an eight-speed ZF transmission, the engine can propel the Vantage from zero to 100 kph in 3.6 seconds, with a 314 kph top speed.

The V8 is set as far back and as low as possible in the chassis, helping to achieve a perfect 50:50 weight distribution.

As befits a car with Aston’s pedigree, the aerodynamics have been well scrutinized in the wind tunnel.

The front splitter directs airflow under the car and to the rear diffuser to generate downforce without need of a large tail spoiler. To have such a high level of downforce is actually a first for a core production Aston Martin.

The interior features a low driving position and high beltline to help position the driver well within the car.

Rotary and toggle-style controls were chosen to be easily actuated by feel alone.

The transmission buttons are arranged in a triangle, and major controls are clustered into different zones.

The Vantage is the first Aston Martin to feature an electronic rear differential. The e-diff can quickly change from fully open to locked in milliseconds, directing the torque to the wheel with the available traction. 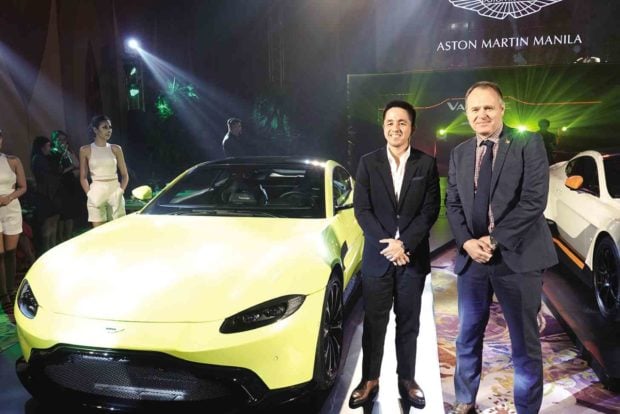 The e-diff also helps the car achieve better high-speed stability, both in a straight line and cornering.

The chassis uses a bonded aluminum structure, first introduced on the DB11. Targets for the platform include high rigidity, light weight and balance.

The Vantage has switchable driving modes for Sport, Sport Plus, and Track. The various modes control engine response, transmission, e-diff, dynamic torque vectoring, and adaptive damping to make the Vantage more responsive with each higher mode.

Aston Martin Red Bull Racing Formula One ace Max Verstappen put the Vantage through its paces on a race track as it was undergoing development. Verstappen enjoyed the car’s playful nature and easily controlled handling.

The Vantage may be perfectly at home on a race track, but it still keeps the superb level of luxury and convenience that the brand stands for. There’s Alcantara and leather trim, available carbon fiber interior, and myriad options for customization.

Aston Martin Manila’s president, Marc Tagle, said: “We are extremely excited to finally launch the all-new Aston Martin Vantage in Manila. From its successful predecessor, we have something entirely new, signifying the new era of Aston Martin. One’s senses will be truly overwhelmed when driving this car on the road with its incredible agility and dynamic performance. It has a 4.0-liter twin turbocharged V8 which creates that distinctive Aston Martin roar.”

You won’t be able to buy Bond’s DB10 concept car, but the new Vantage would be best real-world alternative.