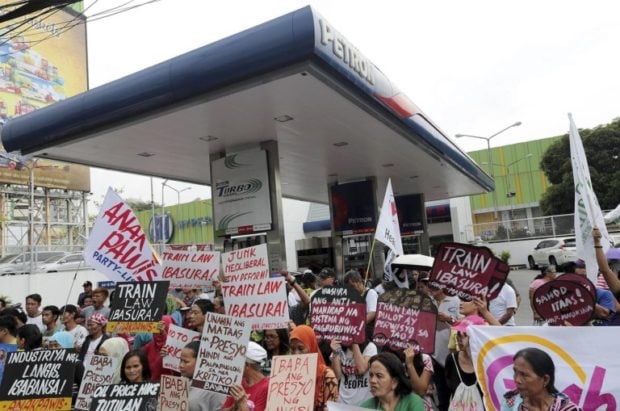 LOW REGARD FOR WORKERS’ Despite declining gas prices, labor groups say the government’s insistence on a second round of fuel tax shows its low regard for the welfare of the poor people affected by the tax policy. —GRIG C. MONTEGRANDE

Malacañang is supporting the decision of government economic managers to push through with the second round of fuel tax increases next month.

Presidential spokesperson Salvador Panelo said the economic managers had their reasons for withdrawing their initial recommendation to suspend the fuel tax increase amid rising inflation.

“I’m sure they have basis to make that recommendation. They are competent and able to explain themselves to the lawmakers,” Panelo said at a press briefing on Monday.

Labor groups assailed Malacañang’s backing of the economic managers’ proposal to reimpose the second round of the tax on fuel, saying it was proof of its “low regard” for the poor who are most affected by the administration’s tax policies.

They cited the recent decrease in crude prices as the reason for withdrawing their previous recommendation to suspend the next round of fuel tax increase.

President Rodrigo Duterte said on Monday night that he would hold a Cabinet meeting on Tuesday to discuss the recommendation to push through with the next round of increase in fuel tax.

The President told reporters to just wait for the outcome of the meeting, which will arrive at a consensus on the matter.

Asked whether there would be a decision on Tuesday, the President said: “Not necessarily. But I hope we can resolve it in the Senate.”

He underscored the need for his economic managers to speak about the impact of the fuel tax on government projects and “the lack or sufficiency of money in government to go on with the projects.”

The Tax Reform for Acceleration and Inclusion (TRAIN) Act imposes an additional tax of P2.24 a liter for diesel and gasoline, consisting of P2 excise and 24 centavos value-added tax (VAT), starting on Jan. 1.

Under the TRAIN law, the imposition of fuel taxes can be suspended if prices of Dubai crude exceed $80 a barrel for three consecutive months.

On Sunday, Sen. Sherwin Gatchalian, chair of the Senate economic affairs committee, said the passage of the 2019 national budget might be delayed if the economic managers would proceed with the next tranche of fuel taxes.

Three other senators have warned that raising fuel taxes in 2019 might result in a new wave of inflation.

Asked to comment, Panelo said Gatchalian was only one of the 24 lawmakers in the Senate and that the “passage of the budget would again depend on the call of members of Congress.”

“His opinion or observation may not be shared by the 23 others,” he said.

The Nagkaisa labor coalition said suspending the second round of the fuel tax would have provided the poor breathing space after suffering from the high cost of basic commodities and services over the past few months.

“Pushing for its implementation depicts this government low regard for the welfare of the poor people affected by its tax policy that burdens them more,” Nagkaisa spokesperson Rene Magtubo said.

The group earlier blamed the high inflation rate, which reached a nine-year-high of 6.7 percent in September and October, to the fuel tax.

The Associated Labor Unions-Trade Union Congress of the Philippines (ALU-TUCP) said the government should not push through with the imposition of the additional tax as workers had yet to recover from the impact of this year’s high inflation rate.

Sentro secretary general Josua Mata said he was not surprised by the economic managers’ decision.

“Cloistered in their rich men’s world, they no longer are capable of empathizing with the lot of the working people,” Mata said.