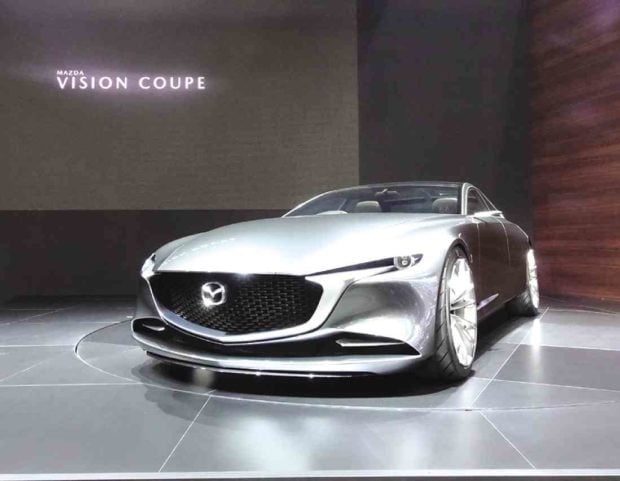 This is what greeted visitors of the 35th Thailand International Motor Expo held at the Bangkok Impact Challenger facility. We weren’t exactly expecting that.

The Motor Expo in Bangkok is one of the larger and more important of the Thai automotive fairs, and is considered to be one of “quality over quantity.”

Don’t get the wrong idea, it took quite large amounts of space both internal and external. But it was also a show that drew not just the products that the companies wanted to sell, but also to help communicate what the future may hold.

So perhaps, that explains the show’s tagline better.

The visions for the automotive future came in the form of concept cars on display, and these included a wide range.

The Mercedes-Benz Concept EQA was on hand with its digital display nose as an attempt to show the brand’s thoughts on what may be coming up, and their commitment to the compact class.

Mazda brought in the sleek and stunning Vision Coupe, a car that clearly shows there is still beauty to be created in the automotive field. We all dearly hope it makes it to the streets as a production car.

Perhaps the most attention-attracting concept car was the MG E-Motion Concept, another curvaceous design from the company that people are still wondering about.

The display concept included augmented reality displays and lots of flash and bang. Note that MG is a combination of past, present and future as an old name with a new ownership structure, and it may have been the most ambitious of the cars in terms of scope of displays.

This followed with another strong component of the show: motorcycles. The level of presentation of newer, less-established, and incoming Asian two-wheelers was almost overwhelming when compared to the more mainstream or established motorcycle companies.

There was more branding, a lifestyle orientation, and often well-sorted gear and accessory display and sales. It almost felt like they were clothing companies than motorcycle companies. They clearly showed us the way they are going.

Another component of the show was pre-owned vehicle sales, with many brands offering their certified fleets to the public.

Also, in terms of the future of mobility, there was a surprising amount of cars and vans fitted with very slick wheelchair-integrated interiors, including automated lifters and crane systems.

We have been seeing this in more global shows such as Tokyo’s, but in Thailand, they are clearly aimed at the buying public.

In spite of cars becoming more complete (meaning harder to mess with outside brand servicing), there was still a big component of aftermarket audio and video systems, battery chargers, tires, wheels, brakes and the like, even a rather sizeable display of massage chairs and exercise equipment for personal mobility.

So yes, we are seeing more intrusion of electronics, but we are also seeing more of the need for personalization and individuality.

The integration of wheel chairs, for example, is an excellent use of technology to allow more freedom for many. And as much as we are looking at increased automation and computerization, it is clear that the discernments will be very affected by passion and enthusiasm and individual desire.