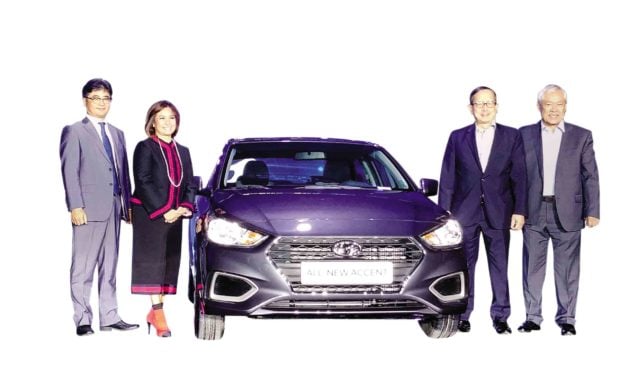 Despite the automotive sales slowdown suffered by almost all stakeholders of the industry this year, here’s one automaker that can hardly wait to get 2019 going on a rip-roaring start.

Hyundai Asia Resources Inc (Hari), which has become the third top ranking automotive company in the Philippines, has bid 2018 adieu in a grandiose Korean way, by launching not just one, but four vehicles simultaneously last Dec. 6 at the SMX Convention Hall in Pasay City.

Unveiled before a sizeable crowd of Hari officials, representatives of Hari’s 42-dealer network, financial partners, and members of the local motoring media were the K-4, the four new frontrunners in the Hyundai stable: the Grand Starex Urban, the refreshed Tucson, the Ioniq Hybrid, and the bestselling fuel-miser sedan, the all-new Accent.

The multi-vehicle launch, themed Runway to the Future, was promptly followed by a Christmas program complete with celebrity performers and games with enticing prizes and raffle draws.

The Hyundai Motor Company, founded in 1967, has truly gone a long way since it rolled out its first car in 1976.

Described by auto journalist Tony Lewin as being “one of the most creative companies in the global auto industry with design studios in Korea, California, Germany all competing with one another to produce the brightest and bravest ideas,” Hyundai has shown that it has consistently placed style and performance among its highest design priorities, as shown in this latest roster of vehicles to roll into Philippine shores.

These priorities have somehow been in sync with the Filipinos’ own preference in cars, as three of the vehicles launched have been among the local topsellers in their categories.

This time, Hari has also bravely offered its first hybrid car in the country.

All around, the Ioniq Hybrid is undoubtedly Hari’s “climate change-appropriate” car.

With the Ioniq, Hari can lay claim to be one of the rare few in the automotive industry that proactively advocate a cleaner environment—not only in its production and manpower facilities (such as the environment-friendly Hyundai Logistics Center at the Mt. Makiling Forest Reserve in Laguna Province, and the Hyundai Dream Center Philippines)— through the very cars it makes.

Hari describes the Ioniq Hybrid as “sculpted with a unique exterior design philosophy dubbed by Hyundai as Visual Aero, exuding confidence with a futuristic look inspired by the beauty of flowing air. It has earned sterling reputation for its state-of-the-art technology in achieving competitive fuel economy and environment-friendly performance.”

Quite fittingly, Hari’s big van, the Grand Starex, now gets even more opulent, yet still with that right-at-home feel of interior amenities.

According to Hari, the Grand Starex Urban is its flagship vehicle. “The Hyundai Grand Starex’s progressive refinements for the past 17 years convey Hari’s commitment to bring delight to the most important market in the Philippines: the family.

“Now in the form of the Hyundai Grand Starex Urban, families can enjoy a higher quality of driving experience as they indulge in its luxurious comfort, unparalleled craftsmanship, and modern-premium style.”

The best might have just gotten better with the facelifted Tucson.

Just recently, the Tucson received accolade from internationally recognized JD Power as being “the best performing” among Hyundai vehicles in a global survey.

Now comes a refreshed Tucson, which Hari describes as “reborn with upgrades from inside and out. This dynamic crossover is joining the ranks of the all-new Santa Fe and the Kona in bearing the mark of Hyundai’s new SUV family identity.”

The Accent brand is a personal favorite of the author, who experienced firsthand the remarkable fuel efficiency of this comfortable compact sedan during a recent 300-km round trip between Lucena City and Manila.

Despite the Friday night trip complete with the bumper-to-bumper traffic caused by millions of city workers going home to their provinces at the end of the work week, the Accent still managed 13.33 km to the liter on an average crawl of 28 kph.

Now, the all-new Accent remains as Hari’s whiz kid when it comes to fuel efficiency, but is now “ready to take things further with its sinfully sleek style and stronger body structure,” as attested by the use of 50-percent advanced high strength steel (AHSS) in critical areas of the body structure.

In her speech at the event, Hari president and CEO Ma. Fe Agudo said, “2018 brought extraordinary challenges in the marketplace, resulting from the tough economic environment that tested our capabilities.

“As such, we have remained focused by laying down the groundwork to ensure an unhampered and successful takeoff of our business for the brand in 2019.

“Runway to the Future is our way of expressing our appreciation of the gallant men and women in the Hyundai dealership network, our esteemed friends from the media, and partners in the banking industry who inspired us in braving this year’s headwinds and turbulence in our industry.

“Given this backdrop, we look forward to take off and fly high towards more notable achievements, and set new records through innovative mobility, headlined by the Hyundai Grand Starex Urban, the Hyundai Tucson facelift, the Hyundai Ioniq Hybrid, and the all-new Hyundai Accent come 2019.”

The Ioniq Hybrid goes for P1.498 million, the refreshed Tucson starts at P1.308 million and tops off at P1.835 million, while the all new Accent price starts at P725,000, with the top-of-the-line going for P1 million. The Grand Starex Urban price is yet to be determined as of press time.