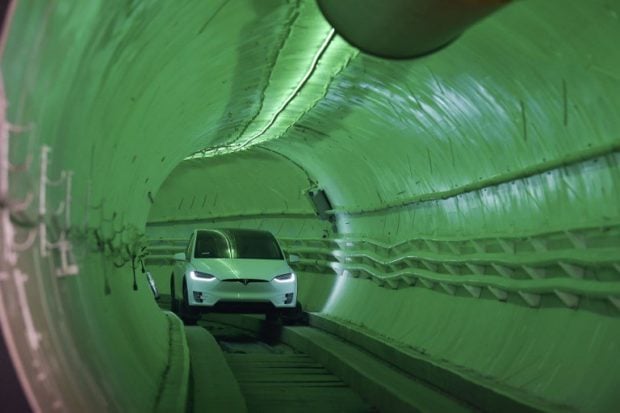 HAWTHORNE, US — Elon Musk on Tuesday took a break from futuristic electric cars and private space travel to unveil a low-cost tunnel he sees as a godsend for city traffic.

The billionaire behind Tesla and SpaceX late Tuesday put the spotlight on the a 1.14 mile (1.8 kilometer) tunnel created by his Boring Company for about $10 million.

The sample tunnel is part of Musk’s vision to have an underground network that cars, preferably Teslas, can be lowered to by lifts then slotted into tracks and propelled along at speeds up to 150 mph (241 kmh).

“The only way to solve this is to go 3D, for the transport system to match the living quarters,” Musk said of solving the problem of traffic congestion in urban areas.

“It’s all relatively simple, no Nobel Prize is needed here.”

An entrance to a sample tunnel was shown publicly for the first time in this city near Los Angeles as the initial stage of Musk’s project to revolutionize city traffic by zipping along below congested streets.

Musk founded the Boring company two years ago as a self-financed, side-endeavor to his work at Tesla and SpaceX.

Specially designed equipment drills tunnels wide enough to accommodate a car on a track. The network envisioned is an infinitely expandable mesh of tunnels and elevators capable of having more than 4,000 cars pass through per hour.

“The deepest mines are deeper than the tallest buildings,” Musk said.

“The profound breakthrough is very simple: it’s the ability to turn a normal car into a passively stable vehicle by adding the deployable tracking wheels, stabilizing wheels,  so that it can travel at high speed through a small tunnel.”

Tunnels will eventually be open to all compatible self-driving electric vehicles, but for now Boring is using Teslas in the tube.

The idea for the project came to the billionaire of South African origin when he was fuming at the wheel of his car, trapped in traffic jams between his chic Bel Air villa and the SpaceX offices in Hawthorne.

It is a journey that takes him more than 90 minutes and he considered soul-crushing.

The “tunnel test” unveiled Tuesday appeared simple: a narrow tube, only 3.65m in diameter (12 feet), freshly painted white, in which a Tesla Model X is fitted with tracking wheels to stay in a track and avoid bumping the walls.