2018 was truly a banner year for me at a personal level: I got to drive some of the best driver’s cars imaginable in a single year.

Ironic, despite the fact that 2018 will be remembered as a poor year for sales in the Philippine automotive industry.

With industry sales dropping between 18 percent to 22 percent for the vast majority of car brands, and some even stating an unofficial 40 percent decrease in sales, it is a year we all want to look past and forget.

But for me, from a keen driving enthusiast’s point of view, 2018 will be hard to top!

Let’s take a look at these cars, and why I consider them the best of 2018.

The Honda Civic Type-R has remained a dream for many JDM enthusiasts.

Turbocharged, bigger, heavier and more complex for the 21st century, the latest Civic still delivers all the thrills you can expect from Honda—race-bred engineering, an organic steering feel, and a very linear power delivery despite being turbocharged.

The latest Type-R is also blessed with amazing grand touring abilities. It shines on track, but feels great on long drives, preferably on winding mountain roads.

It is the absolute best real-world enthusiast’s car, and the most affordable in this lot.

To drive the new Mk2 GT3 is one thing, to drive it on Se-pang’s full Grand Prix Circuit just ups the ante even more.

And what better car to use than something with real motorsports pedigree, that is the GT3—sublime, demands respect, with all of the theatrics of a real race-bred sports car, but zero drama.

The GT3 is the sharpest, keenest, most gob-smackingly amazing car I’ve driven in 2018. Only a GT3 RS or the crazy GT2 RS can top it! 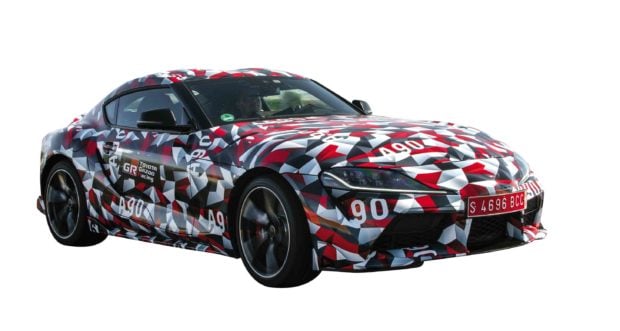 The Toyota Supra occupies a special place in my heart.

Being a long-time owner of the MKIV A80 model who has spent a decade tinkering, fixing, upgrading, improving, modifying and tuning it, the Supra’s legacy, history and full potential is something I know and value to heart.

So, when a new one was announced, I had to get behind the wheel to find out how great it is. And boy, the new one surely did not disappoint—worth the very long wait, and retaining its essential Japanese feel despite sharing key components with BMW.

I’m excited to drive the all-new production version model hopefully next year. It’s unconfirmed, but looks like we’ll get the new A90 Supra in the second half of 2019.

A prancing pony will always be special, and the F488 is truly that. It’s always special to bring home a Ferrari, even for just a few days. And with instructions to enjoy it to the max, I most definitely did.

It felt surreal driving it through provincial roads, and the degree of civility, matched with the solid build-quality banishes any fears of a high-strung diva.

The F488’s turbocharged powerplant still delivers the goods, and with more torque, makes it more relaxed when you’re not in the mood, but even more manic when you open the taps completely.

Indeed, 2018 was a great year because I got to drive not one, but two Ferraris to my heart’s content.

The Lusso is Ferrari’s real Gran Turismo, thanks to its four-seater layout.

While others may jokingly refer to it as an oversized hatchback, the GTC4 Lusso T (the T stands for the V8 twin turbo engine in lieu of the bigger, more powerful and more expensive naturally aspirated V12 flagship) has real-world useability and practicality.

The lift assist raises the car considerably higher than regular econoboxes, so you have no problems taking it out of town.

And it feels special inside, luxurious and truly enchanting.

The LC500 is the second most affordable car in this lot, but it doesn’t make it any less special.

With its space-age looks, well-balanced chassis, powerful and progressive engine with equally powerful brakes, the LC500 represents the very best of Japanese engineering as applied to a Gran Turismo.

Sleek, agile, fast, and with the reliability the Japanese marque is famous for, the LC500 feels every bit as special as any Porsche or Ferrari model out there. And it won’t cost an arm and a leg to service.

Audi’s latest mid-size coupè, now with a V6 turbocharged mill, is everything its predecessor would have wanted it to be—stylish, luxurious, high-tech, well-damped, comfortable, and crucially, without the nose-heavy sensation the older V8 model was cursed with, replaced by a pointy, agile and responsive front-end.

Balance is better, and its turbocharged engine gives it a more relaxed cruising gait while delivering even greater top-end grunt, and in real-world driving conditions, probably almost 100 percent improvement in fuel efficiency. That’s the cherry on the icing.

A rally rep like the Subaru STI is great for our roads, while the Levorg is just slightly more practical with its copious rear cargo space.

But if you want to straddle that fine line between comfort and practicality, armed with the latest in active safety systems, the WRX is hard to beat.

Decently sized, comfortable, and easy enough to use everyday, the WRX is loads of fun on winding roads and on the track, but not too hardcore so that you can still use it everyday.

I love it. It’s a car perfectly compromised to be a jack-of-all-trades when cars are life but adulting is a necessity.

There are loads more cars I drove in 2018 that were interesting, but not exactly something we’d classify as a driver’s car.

These cars made my year special, and these will be hard to top anytime soon. How was your 2018 like?