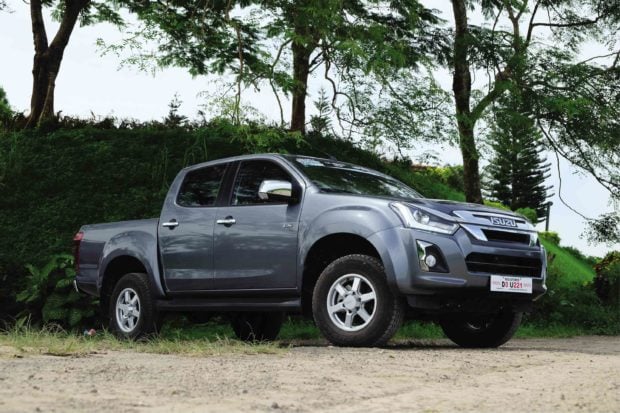 Since 2013, the Isuzu D-Max has been the only pickup in the Philippines assembled locally.

Unfortunately, by that time, assembly operations will have ceased for this tough, reliable workhorse.

After stocks run out, the next pickups from Isuzu will all be imported CBU from Thailand.

IPC’s abrupt announcement that it would halt the assembly of the D-Max in favor of imports from Thailand comes as a surprise.

Didn’t pickups in the Philippines enjoy tax exemptions from the recently implemented TRAIN (Tax Reform for Acceleration and Inclusion) Law, and therefore would enjoy competitive pricing, and hold bigger potential for market growth?

It certainly seemed bad timing for IPC to pull the plug on the locally assembled D-Max.

But then again, there’s more to local assemblies than just tax incentives.

Consider that, since 2013, the D-Max had been the only pickup registered in the Board of Investment’s Motor Vehicle Development Program (MVDP) to be shipped into the country as CKD (completely knocked down), and assembled in Biñan.

As far as bringing in vehicles go, this would be an impractical move for an auto manufacturer such as Isuzu, which maintained an assembly plant in nearby Thailand.

But IPC said it went ahead with local assembly, anyway, to show support for the government’s MVDP, to help develop the local parts manufacturing industry, to generate local employment, and to be able to customize certain specifications for the local market.

An auto industry expert (who used to be involved with assembly plant operations) said that IPC’s local assembly of pickups “was more of an exception.”

“I was surprised IPC continued local production long after the competition shifted to Thailand-assembled CBUs,” the source added.

Things were going well at the start, but in recent years, four factors ultimately led to IPC’s decision to finally let go of the locally assembled D-Max:

1. Imported CBU (completely built-up) pickups became too much of a competition.

A reliable source close to IPC executives revealed that when pickups received the blanket exemption from the TRAIN Law, the Philippine market became uber-competitive, with other auto manufacturers offering more features for their pickups. The CKD D-Max was unable to react in time.

A 50,000-unit production spread over six years is no match for one million Isuzu vehicles being assembled annually in Thailand, and it showed in the production cost.

My source also adds that the import duties for CBU pickups were zero percent under the free trade agreement, which was the same for CKDs.

“The current MVDP is already outmoded, and a revised one is much desired. It needs to be tailor-made to the new industry situation,” said Ferdinand Raquelsantos, Philippine Parts Maker Association president.

Asked what specific changes were needed in the current MVDP, Raquelsantos cited the $8-million initial investment required from each MVDP participant.

An auto manufacturing executive agreed with Raquelsantos, but added that “the government is already doing a study on the revisions of MVDP. The industry will be fully supporting this move.”

An auto executive from a Japanese firm said that he agrees that the MVDP needs an overhaul, explaining that “Thailand, Indonesia, and now even Vietnam have more progressive car programs,” and that Vietnam has already overtaken the Philippines in terms of local production.

Unlike Raquelsantos, this auto executive said that the $8-million initial investment is just right, adding, “All the players invested more than that amount.”

4. The market for brand new trucks was growing, and the new government became hell-bent on replacing old PUVs.

IPC has declared that it would focus more on expanding its truck assembly, including its platform for modernized public utility vehicles.

“The total market is actually 60,000, but the formal industry only serves 25 percent,” disclosed an auto industry veteran close to IPC officials.

The final question remains then: What are the industry repercussions of this move by IPC?

Raquelsantos, who used to supply seatbelts for the D-Max until this part was sourced from Thailand Autoliv, shared: “Some Philippine parts makers are worried that it would impact their current production loads, but we hope the increase in the production of modern PUVs (using Isuzu’s N or Q series trucks) can offset the supply.”

He added, “We believe that, if there will be any changes in current CKD operations, assemblers will still maintain their current production capacities,” said Raquelsantos.

As for other auto manufacturers, he said: “I don’t think other assemblers will reduce their CKD operations. They may change models, but volume of production should still be the same.

“I have heard, however, that assemblers are increasing their in-house (parts) production, which makes us parts makers really worried.

“We see some of the parts we make to be taken over by these in-house parts makers.”

My auto industry expert source also gave his two cents’ worth on the matter: “To develop the local automotive industry, we need to find a niche that is anchored on a strong domestic market.

“(We need to) focus, be patient, and be consistent. We have a tendency to shoot ourselves in the foot.

“The recent reduction of excise tax for pickups to zero percent under the TRAIN Law is one glaring example.

As of press time, IPC has yet to disclose the number of workers affected by the move.

A reliable source has disclosed that IPC’s manufacturing team is still studying all options. “We are hoping all can be reassigned,” the source said.