I never thought I’d be saying this, but I’ve been more frequently approached by total strangers who ask about this ride than when I was driving premium luxury cars for review.

I guess, there are other factors in play, like I probably look more approachable with a ride like this, and well, almost all of them haven’t heard of the brand MG.

The initials MG were quite effectively derived from British automobile manufacturing company Morris Garages, established in 1924.

I say effectively, since encased in a hexagonal outline, MG became one of the most iconic and recognizable marques in automotive history—unless you’re a millennial who isn’t a car nut.

I won’t get into MG’s rich but eventually saddening history due to limited column space, but MG via MG Rover ended production in its Birmingham UK plant in 2005, and has relinquished manufacturing rights to Chinese motor company Saic.

The new MG ZS 1.5L AT in its top-tier alpha variant is one of its latest releases, and the one I’ll be shoving in the spotlight.

As I’ve reiterated in my past reviews, a car’s aesthetics is arguably the single most important factor of an automobile when it comes to market potential and commercial success.

Before some of you purists break out the torches and pitchforks, I am well aware that brand heritage, lineage and reputation, reliability, and resale value all have huge slices in the “Should I buy” pie, but hardly anyone would touch a new car that is pug-ugly (sorry, fellow dog lovers), or give it a second look.

On the other hand, more than a few will disregard all the other factors in favor of a car’s looks especially if it sparks joy. And when a certain ride initiates conversation, and makes impressive marks on several areas as well, then it’s bound to shake up the status quo.

Get to know me

The MG ZS, which comes in MT style and AT style under the Alpha top-of-the-line variant, makes quite an impact both to those who haven’t heard of the brand before, and those to whom it loudly rings a bell. 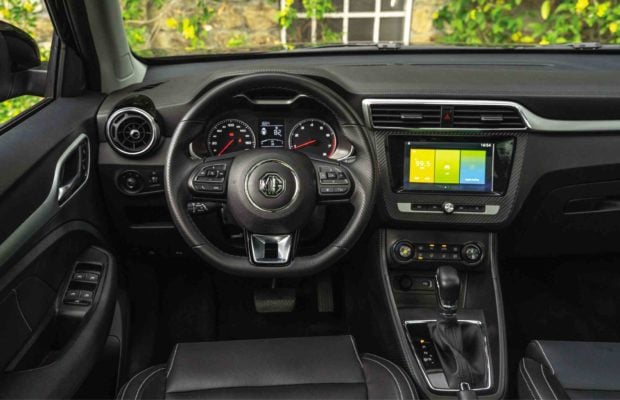 It’s got to be attributed to the tight combination of the London Eye headlights, the Stardust grille, the Plough taillights, and of course, the rightfully prominent MG badge.

The designers certainly knew what they were doing and the desired effect, hence the colorful terms on the ZS’s design cues.

It helps that I had my test unit in Meteorite Black, which I think is the most effective among the six colors.

So, first impressions on its not too young and bold, yet not clinically sophisticated looks are unsurprisingly positive, especially with the stylish 17-inch alloy rims with sporty spokes that reveal 4-wheel disc brakes.

It’s easy to spot the thin upper-lipped, stern expressions with slow and subtle nods of approval from other drivers and passers-by.

But enough on the looks.

The MG ZS 1.5L AT Alpha has, in a short few days I drove it, convinced me that what it offers isn’t just skin-deep.

Equipped with a 1.5-liter 4-cylinder 16V DOHC, DVVT gasoline engine, you have a choice of either a 5-speed M/T, or a 4-speed A/T mated with a manual tiptronic function.

With 114 ps at 6,000 rpm, and 150 Nm of torque at 4500 rpm, it’s acceleration isn’t astounding on the get-go, but quickly picks up to a more-than-ample amount of power to provide for an agile and confident drive in and around the city.

The ride’s comfort level in terms of vibration and harshness is good, as the MacPherson Strut suspension up front and the torsion beams at the rear provide for a smooth and pleasantly pliable ride feel.

MG could have improved on the sound deadening insulation though, since the engine noise (which was more like an electronic whirr than a belabored grunt) when accelerating was quite noticeable.

My passenger agrees that the leather-clad seats are really comfy and provide notable lateral support. The driver’s seat, which is manually adjustable, molds around in six ways.

It looks like MG made sure both the driver’s and four passengers’ needs and wants were addressed well, so that the optimal balance between aesthetics and over performance is achieved. Space for five adults is almost generous, with focus on headroom and leg room.

It’s effortless to drive as handling is light yet precise.

The tasteful use of faux carbon fiber accents and chrome bling on black leather works well, in combination with the 8-inch touch-screen display interface with Apple Carplay (major points for iOS users) and a decent sounding audio system.

It’s a good package for P998,000 for the top end, which comes with a panoramic sunroof that gives pleasant ambient lighting all the way to the back seat—all in all, a great package.

The MG ZS 1.5L AT Alpha definitely transcends whatever its Chinese company manufacturing origin currently connotes, and it does so from the merits of its engineering, well thought-out product strategy, value-for-features pricing, brand heritage (which most probably cascaded down to manufacturing standards), and of course, handsome looks.

MG Philippines threw in a 5-year warranty too, so this places more than a tough argument on the table for your valuable final nod. Will you?