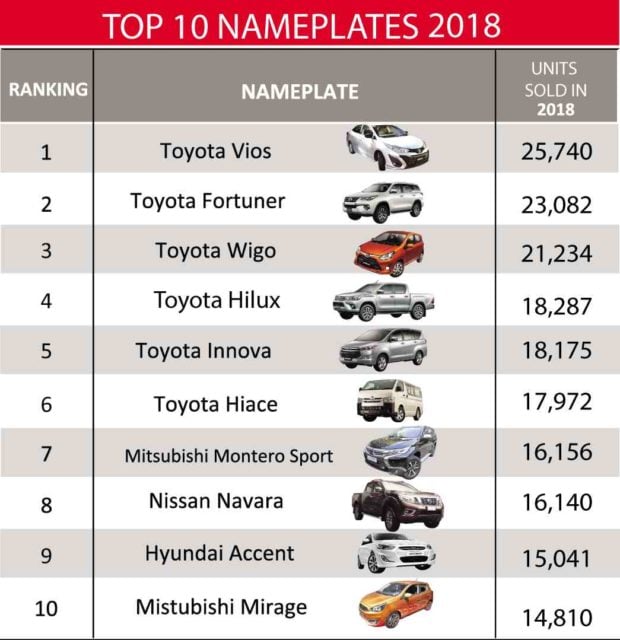 When 2018 ended, the ranking of auto industry players according to sales remained the same as in the first semester, but the rankings of best-selling cars and trucks changed.

The changes happened even as 2018 was recorded as the worst year in decades for the industry, with both the Chamber of Automotive Manufacturers of the Philippines, Inc. (Campi) and the Association of Vehicle Importers and Distributors (Avid) posting double digit negative growth compared to 2017.

That said, there were bright spots for some automakers.

Aside from winning the triple crown for the 17th consecutive year as the number one brand in passenger car sales, commercial vehicle sales, and total vehicle sales, Toyota Motor Philippines Corporation (TMP) reasserted its leadership by sweeping the top six slots in the list of top 10 nameplates of 2018 (see graph).

Last year, Toyota nameplates Vios, Fortuner, Wigo, Hilux, Innova and Hiace pushed out the Mitsubishi Montero Sport (previously no. 2) and Mitsubishi L300 (no. 5 in the first half of the year).

Aside from the pickup truck segment, a Toyota topped five other segments.

The Vios topped the best-selling subcompact cars segment with 25,740 units sold in 2018 aside from placing first in overall sales across all segments.

The Hyundai Accent was a distant second with 15,041 units sold, exactly 10,699 units less than the Vios.

The Fortuner outsold arch rival Mitsubishi Montero Sport by a wide margin of 6,926 units as the Toyota nameplate scored 23,082 unit sales versus the Montero Sport’s 16,156.

Summing up, the six segments where TMP flexed its might in 2018 were:

The Xpander even bested the venerable Toyota Avanza, 10,952 units of which were sold last year. 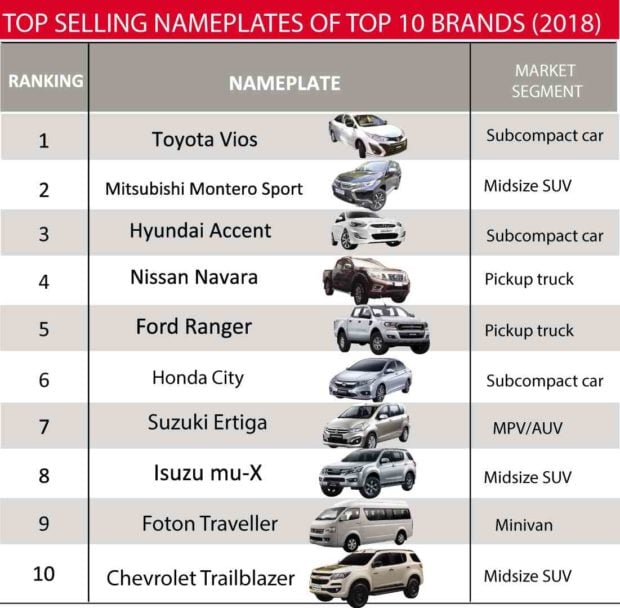 Meanwhile, with the arrival of the completely revamped Strada in the last quarter of 2018, MMPI expects to elevate its ranking in another category: pickup trucks.

In 2018, the Mitsubishi Strada (new model) ranked fourth behind the Toyota Hilux, Nissan Navara and Ford Ranger, yet outsold the Isuzu D-Max by 855 units despite its late arrival on the market.

The entry of the Hyundai Kona subcompact SUV/crossover last year scrambled the rankings in the hotly contested segment as it claimed third place with 2,896 units sold, relegating the Suzuki Vitara to fourth and the Subaru XV to fifth, and pushing the Nissan Juke out of the top five list.

The refreshed Ford EcoSport, the first affordably priced (less than one million pesos) subcompact crossover to be offered in the Philippines, retained first place with 5,024 units sold in 2018.

But its leadership is being threatened by the Honda BRV, which clinched 4,935 unit sales last year, only 89 units less than the EcoSport.

Out of compact SUV picture

Whatever happened to the Toyota Rav4 and the Nissan X-Trail in 2018?

Only 411 units of the Rav4 were sold, while the Nissan X-Trail posted 212 unit sales, far below the Subaru Forester’s 1,641 units sold. They were out of the top five compact SUV picture.

With the dismal sales posted by the Rav4 and the X-Trail in 2018, the Honda CR-V kept the top spot in the compact SUV/crossover category with 3,629 units sold, followed by the Hyundai Tucson’s 3,057.

Unfortunately, sales of this segment’s models of Mazda, Kia and Chevrolet could not be factored into this ranking since the breakdown of sales per model in their lineups were not made available by their distributors.

Kia Philippines could not supply the info since management of the brand had just been acquired by the Ayala Group in December 2018.

But even before Ayala bought into the former Columbian Autocar Corp., the outgoing managers were coy about their sales data.

Ayala’s takeover of Kia should alter that, since all Ayala-controlled automotive brands—Honda, Isuzu, Volkswagen—are not shy about posting their yearly sales figures per model.

As for Bermaz Auto Phils., Inc. and The Covenant Car Company, Inc. (TCCI), the distributors of Mazda and Chevrolet, respectively, it has been their policy for years not to reveal how many units are sold per model.

Ford Motor Co. Phils., Inc. and Suzuki Phil., Inc., which placed fifth and seventh in the top 10 performers of 2018 list, only disclosed the unit sales of their top three nameplates, while a TCCI staff member admitted over the phone that the Trailblazer is the best-selling Chevy.

In Ford’s case, the Ranger, Everest and EcoSport were the stars, while the Ertiga, Vitara and Celerio topped the Suzuki list.

Although Subaru did not make it to the top 10 sales performers list in 2018, the brand’s distributor, Motor Image Pilipinas, Inc., willingly granted PDI Motoring’s request for their detailed sales figures.

This is how it came to light that the Subaru Forester outsold the Toyota Rav4 and Nissan X-Trail by a wide margin in 2018, while the Subaru XV is still among the five best-selling subcompact SUV/crossovers.

If and when the auto industry recovers this year, perhaps the tightlipped brands will become more forthcoming.