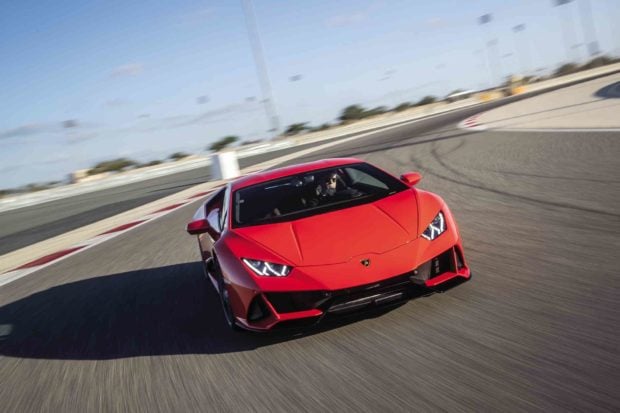 It is increasingly hard to talk about modern cars without going deep into the technical. The new Lamborghini Huracán Evo is a perfect example.

I could easily say it is better than ever, and that it produces as much horsepower and torque as the up-rated Huracán Performante.

That 10 non-turbocharged cylinders roar and scream and rip as they provide you with all the oomph you will ever need.

That Lamborghini has given this bull even better reins, so the power is more controllable and usable.

That it is the best Huracán yet, if not arguably the most well-developed Lamborghini sports car (sorry, super sports car).

That this particular Huracán, if you are a fan of the classics, may well be the one you would buy for posterity.

That it scares you while it keeps you alive, and makes you giggle. All that and more.

But you need to explain things. Because to most people, any Lamborghini is insanity. And to nitpick between the top marques of the world, you really do need to get deep into the details.

And thats not really about the numbers anymore. Its about how the passion is translated and transmitted, via technology and love, to your right foot.

The new Lamborghini Huracán Evo is, just as its name says, an evolution.  It is what you would call a mid-life model change or a facelift.

Even Lamborghini engineers call it that. But in reality, it is so much more than that. It takes the almost-mythic power of the bull and turns it into something that will listen more to what you tell it to do.

We interviewed Lamborghini CEO Stefano Domenicali and chief technical officer Maurizio Reggiani trackside at the Bahrain International Circuit, an awesomely challenging world class track and facility that is the once and future home of the Bahrain Grand Prix.

It is hugely fun to run at night, although the dog that entered the premises and caused the track lights to all blink red was a little surprising. Personally, I thought I was in trouble for what I had just done. But never mind that.

The Lamborghini bosses spoke to us about how they have chosen to develop the cars. Because they already produce so much power, they said, they want to make that power more usable.

“We are already in a phase where the level of output is so high that it makes more sense to work on the chassis,” said the chief technical officer. “The decision was to go to work where you can make the difference.”

What is the difference? The last Huracan the company let loose was the Performante, the crazy one with the big wing.

This new car, the Huracán Evo, has no wing. But it produces power numbers that match those of the bewinged and active-aero Performante (640 hp, 600 Nm).

So, how does it stay flat on the racetrack without the big wing on the back and without aerodynamic bits actively working all the time?

The big factor here is not the amazing driver at the wheel (me, and I’m not if you watch our video and hear me shrieking) but LDVI, which is short for the very long Lamborghini Dinamica Veicolo Integrata, or Integrated Vehicle Dynamics system.

If the luscious V10 is the Evo heart, then LDVI is its brain. It talks to and coordinates with all the car’s systems in order to manage driving dynamics.

It looks at what the driver is doing, what it understands from the environment around it, and what the driver has chosen as “mode,” and then tries to think ahead and anticipate needs.

Actions seem more instantaneous, everything more quick. All this is dependent on what mode the driver chooses—Strada, Sport or Corsa.

This is where it gets more interesting. Before, you merely had a somewhat sequential or linear change between the three modes.

Standard or Strada (road) would be soft, Corsa or Track would be harsh, Sport would be in the middle. In the new Huracán Evo, Strada is what exemplifies the mantra “Every day amplified.”

It is surprisingly usable, and with all wheel steering far more usable on real streets than anything, except maybe an Urus.

Sport is skewed for fun. It lets you get the tail out more easily, and throttle-steer the car without letting you get too out of control. It never seems too nanny-like or overbearing. It really lets you play.

Corsa is, as the Lamborghini bosses said, what you use if someone is chasing you. It is racer-precise, almost harsh.

Yes you can still break the back loose and throttle-steer, but doing so is the same fun but combined with a little more fear.

Corsa will let you get into more trouble, and you will tend to scare yourself straight before LDVI jumps in. Or before you go off the track. Hopefully.

One thing to note about this particular Huracán model is the Evo. Lamborghini brass loves the 10-cylinder format. They love how the power comes on and how the engine roars. And they don’t necessarily think that the way the power of turbochargers comes in is in line with the DNA of the raging bull.

Yet, they also understand that modern environmental pressures necessitate some kind of change. The next model life that is due for a full change, they said, was that of the Aventador.

So, if we think we might see different power generation used (in combination) in that biggest and boldest of Lamborghinis, will that signal that the Huracán Evo will be the last of the old breed?