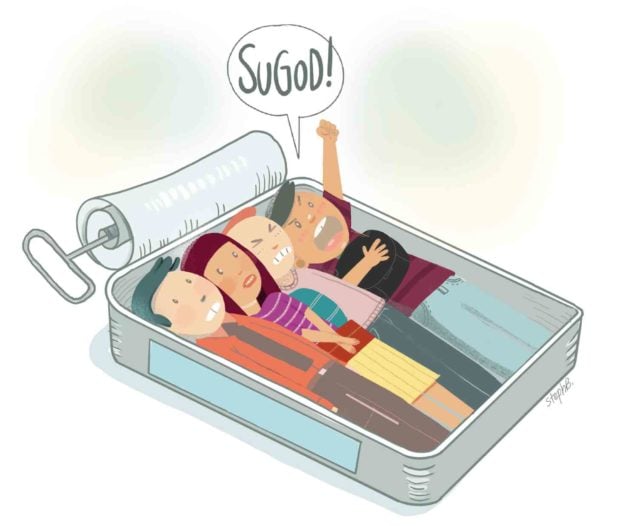 Over 10.4 million cars were registered with the Land Transportation Office in the Philippines in 2017.

About 90 percent of that number (about 9.3 million) are private vehicles, with about 25 percent (about 2.6 million) were registered in the National Capital Region.

That sounds like a lot, until you consider that Metro Manila has approximately 12 million inhabitants—which means that even though it seems like the city is inundated with vehicles, a vast majority of people still have to rely on public transportation to get to wherever they need to go.

If you have a car and you drive it regularly to school or work, or to go the mall or wherever, it’s remarkably easy to forget the hardship other people have to go through every day to get from point A to point B.

Car owners’ main issues are traffic and parking (and maybe coding once a week), but commuters have to contend with things like limited options, pollution, vehicles breaking down, sun, rain, and fighting for space with other people on cramped buses and trains before they even get to their destination.

And that’s just the morning commute; they have to do it all over again in reverse to get home.

I guess I can count myself one of the lucky ones for having a car that I can use regularly to get to my office every day, and then to other places after work or during the weekends.

However, at least once or twice a week, I leave my car at home and become part of the teeming masses that have to rely on buses, trains and other means to get around.

(Yes, on one of those days, I can’t take my car out because of coding, but I try to add a second day of commuting partly to do my share to lessen vehicle congestion on Metro Manila’s roads, and partly to save on gas.)

My public transport of choice is the MRT—I’m fortunate to live within a 10-minute walk from one station, and my office is similarly just a short walk away from another.

If I’m really lucky, I only need to get in line on the platform and wait a few minutes to get on the next train.

But on most days, there’s a queue for the “security” check, before you even swipe your card on the turnstile.

And when it’s a particularly heavy morning, the line can snake through the ticketing platform, past the stairs, and all the way down to the street.

I’ve experienced some days when I’m standing in line for the MRT beside people on Edsa waiting to catch a bus. It takes at least an hour before I get to see the inside of the train.

There’s another story: sardines-in-a-can would be an apt description if it can fit 100—even 200—people, and you’re smushed against another guy nose-to-armpit, fighting for every breath until the door opens to your station, and the train belches you out like some kind of choking hazard.

In the late afternoon or early evening, if I find myself in the south waiting to catch the train to go back up north where I live, it’s even worse.

If you’ve ever dared to take the MRT from Taft, Magallanes or Ayala during the afternoon rush, you know what I’m talking about.

My next option is to take the bus. I’m no stranger to taking the bus on Edsa: I did it every day for four years while I was studying in UP Diliman.

A lucky day would be if you get to sit down, the aircon is on full blast, and you get to where you’re headed in no time.

That, of course, happens almost never. The reality is you jostle other people to get inside a bus, which is likely already packed, so you’re pretty much standing the whole way.

Of course, traffic is a nightmare so it’ll take you over twice as long to get to wherever you need to be.

But most buses now have video entertainment, so you’re at least watching the latest teleserye or an illegally downloaded blockbuster while you stew in traffic standing up.

Jeepneys are another alternative, I guess, but there’s no direct route, which means I would have to change once or twice to get home or to the office.

And of course, the al fresco situation means I get the full air pollution experience.

Sure, it’s safe, comfortable and relatively fast (although you’re still at the mercy of current traffic conditions), but it’s also incredibly expensive and will eat away your savings if you’re not careful.

I do it when I’m in a hurry, or when I need to go somewhere the MRT or bus can’t reach.

That’s my commuter experience in Manila. It’s exhausting when I do it once or twice a week, but then I remember most people have no other choice and have to do it every single day of their lives.

It heartens me to know that the government is doing what it can to alleviate the suffering of commuters in the city (new train routes, a subway, new and better roads, etc.), but until then, I guess we all just have to grin and bear it.