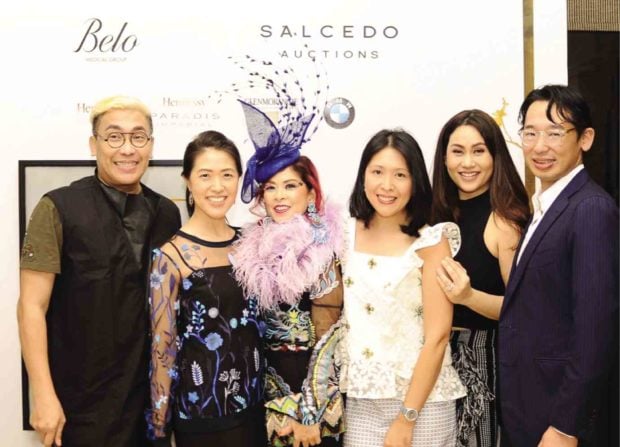 BMW aficionados are well aware that this is not an unusual collaboration.

BMW Philippines once brought in the BMW Art Cars, a project introduced by French race car driver Herve Poulain, and had the likes of Andy Warhol and Jeff Koons giving their creative take on BMW’s technology.

It’s art season in Manila, when creativity is at its peak. From the much celebrated Art Fair in Makati, BMW chauffeured the VIP attendees in limousines to an exclusive, first viewing of key pieces from Salcedo Auctions’ forthcoming marquee sale hosted by Salcedo’s Richie and Karen Lerma and art aficionado Dr. Vicki Belo at the Belo Residence in Makati.

As a follow up to the P73.584 million sale of the Spolarium Boceto, the highest amount paid for a Juan Luna painting in the Philippines, Salcedo Auctions unveiled its latest collection of masterworks.

Two Juan Luna paintings—a boceto and a large oil on canvas—and a Félix Resurrección Hidalgo painting closely linked to a work by the 19th century great now in the Bank of the Philippine Islands collection were auctioned.

Luna’s 1880 boceto, “La Muerte de Cleopatra,” together with a larger circa-1890s oil-on-canvas, “The Hunting Party,” and the circa-1880 “Draped Nude, Reclining in a Forest Landscape” by Hidalgo are both from the family that once owned Luna’s 1884 España y Filipinas now in the National Gallery of Singapore.

Salcedo Auction’s Richie Lerma explains: “The significance of the Cleopatra boceto in Philippine art history is that it provides the link between the 1874 painting by the French artist Rixens that inspired the award-winning 1881 mural-sized work. As the Prado Museum curator Carlos Navarro said, Cleopatra is a political statement as the Egyptian queen’s refusal to be captured alive by the Romans may be seen to represent the Philippines defiant stand against being enslaved by its colonizer.”

Alongside this masterpiece, Luna’s “The Hunting Party” showing two men, one on horseback, accompanied by three dogs, could be read as a valedictory metaphor for revolutionary struggle and camaraderie near the end of the artist’s life.

The work by Hidalgo, Luna’s contemporary and rival, is a rare, circa 1880 discovery that can be traced to the time of the artist’s studies in Madrid.

The painting is interpreted to be a mythological reconstruction of a nymph in a lush forest, an evocative picturing of the communion between humanity and nature.