Holy Week is one of the best times to go on a road trip, either to your hometown for the religious traditions and family reunions, or a new destination you have marked on your bucket list.

But with the Christian faith deeply ingrained in our systems, spending these solemn days simply for leisure brings a sense of guilt, even to the most jaded travellers.

There are a number of Lenten-related events that will allow you to both observe the proverbial holy days and get to see the charming countryside. Walkway to the Vulcan Daan in Camiguin

This sleepy island province off northern Mindanao teems with pilgrims and tourists alike for this annual walking ritual around the 64-km circumferential road on the days leading to Good Friday.

A Visayan word which loosely means promise, Panaad welcomes some 30,000 devotees and tourists who circumnavigate the so-called “island born of fire” on foot, making stops at designated areas for prayer and breaks for personal needs along the way.

Devotees usually set off before sunset on Maundy Thursday, completing the penitential walk within 24 hours, sleeping at homestays where residents offer their homes overnight for a minimal fee or sometimes free, while others pitch tents and makeshift sleeping quarters along the beaches.

This devotion is a local recreation of the Jewish pilgrimage to Jerusalem for the Passover Feast, the most important religious commemoration of Israel, which takes place at about the same time of the year.

The endpoint of the journey is the Stations of the Cross located at a mountain called Vulcan Daan or old volcano, which can be accessed through a walkway of about a thousand steps.

The number might be daunting, but the climb isn’t as exhausting as it seems as you get to pause every few minutes for prayers at each of the 14 stations with life-size tableaus of Christ’s crucifixion.

At the summit of the extinct volcano, you will be rewarded by the stunning view of the vast expanse of the sea, the sky, and the iconic giant cross of the Sunken Cemetery.

Mt. Vulcan erupted in 1871 and submerged the old town proper of Catarman, leaving behind ruins of a church and a belfry known as the Old Church Ruins, which was declared last year as a National Cultural Treasure by the National Museum.

The long walk is a spiritual journey where you can reflect on the essence of the Lenten Season, as you take on the road less travelled.

Worthy of special mention is Mantigue Island, which takes pride in its powdery sand beaches and rich marine life ideal for scuba diving.

A new destination is the Camiguin Nightscapes, a star-gazing spot within the lush Mt. Timpoong-Hibok Hibok Natural Monument, which was declared recently as a natural heritage site by the Association of Southeast Asian Nations (Asean) Centre for Biodiversity.

Getting there is like a pilgrimage in itself. The most popular and least expensive way is to fly to Cagayan De Oro City airport, and take a bus or van to Balingoan port for a one-hour boat ride to Benoni port in Camiguin. From there, there are vans and jeeps bound for the capital town of Mambajao.

Another exciting route is to fly to Bohol, take a bus to Jagna port for a three-hour ferry ride to Mambajao.

The most convenient, but the costliest, route is to fly to Cebu and take a connecting flight to Camiguin. 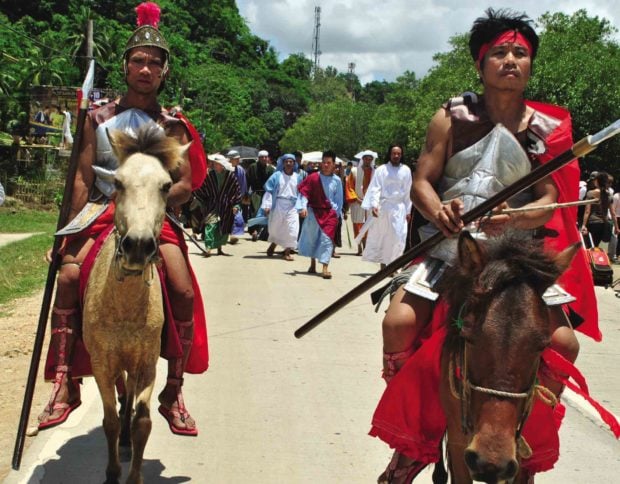 One of the most visible and awaited traditions in the rural areas is the cenaculo or a dramatization of Christ’s last few hours leading to the crucifixion.

It goes by different versions across the archipelago, and in this idyllic island province of Guimaras, it goes by the name Pagtaltal.

Held at the capital town of Jordan, this Good Friday street theater is inspired by Germany’s epic Oberrammergau Passion Play, and takes the traditional cenaculo to a higher level because of its splendid production values in terms of script, costume, and other elements.

The presentation unfolds at the Jordan Smallest Plaza, moves around key places, and concludes at the Balaan Bukid where the crucifixion scene takes place.

Along the climb is the Stations of the Cross, and on its summit is the Chapel of Ave Maria Purisima and a big white cross.

Across the various towns are events such as the reading of the Pasion, the Siete Palabras Mass, and the candlelight procession where antique religious carrozas are taken out.

One of the under-the-radar rituals, this is made unique by the presence of the Tais-Dupol, Spanish-inspired barefoot devotees masked in pointed hoods and robes asking for alms around the town of Palo, Leyte.

There is also the Good Friday cenaculo where the hooded penitents take part as marshals and characters of the street reenactment.

Meaning reflection, Pamalandong is held around the Metropolitan Cathedral, a makeshift hospital for the wounded during World War 2, and a refuge for supertyphoon Yolanda evacuees in 2013.

A showcase of modern gothic architecture with a gold-plated 17th-century altar, it was visited by Pope Francis in 2015.