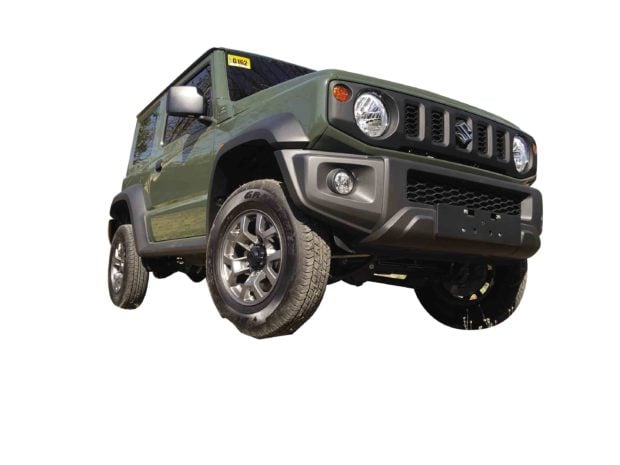 Perhaps one of the most anticipated cars for 2019 is the all-new 4th generation Suzuki Jimny, a car that appeals to both enthusiasts, 4×4 hobbyists and cost-conscious motorists.

On paper, the all-new Jimny comes with a revised body-on-frame structure with an integrated X-Lumbar support underneath. Upgraded body rubber mounts provide an improvement in noise, vibration harshness and refinement. The interior is new and very retro, but with admittedly cheap-feeling, low-quality plastics. But this probably won’t matter to or bother the vast majority of people buying the Jimny. It’s significantly roomier than its predecessor—I had a hard time fitting inside the old model, which is no longer the case with the new Jimny.

Power comes from a new 1.5-liter K15B engine featuring 16 valves and dual overhead cams, delivering a modest 101hp of output and 130Nm of torque. These figures seem low, but when coupled with the Jimny’s 1100kg curb weight, it matters little. Slot the transmission into the low-gear transfer-case and you realize that in off-road performance, it all boils down to proper gearing.

The 4-speed automatic transmission is perfectly geared in terms of its existing ratios, but needs one more extra higher gear for better highway cruising speed. At 100km/h in 4th gear, the K15B engine is already spinning at around 3,000rpm. You won’t want to go faster than 100km/h anyway as crosswinds on the highway, especially on the Skyway. The wake of air being pushed by trucks and buses will also rock you inside the Jimny which is also a disconcerting experience.

A typical modern SUV or sedan will have its engine revving below 2,000rpm at that speed. Thus highway fuel efficiency isn’t as good as one would think for such a small, light vehicle. Its barn-door aerodynamics won’t help while on the highway. And yet on my weekly drive down south to Tagaytay City, I averaged 11.6km/liter going up to Tagaytay, and 12.4km/liter going back to Metro Manila. That’s a 150km round-trip drive, on a newish engine with only 595 kilometers on its odometer. With more mileage, I expect fuel efficiency to improve a bit more. In the city, the Jimny averaged roughly 9km/liter which is very good given my driving style. First and second gears are short and spritely, making in-gear acceleration in cut-and-thrust driving energetic. There’s a pronounced gap between second and third gear, but still giving decent performance to make smooth forward progress.

It’s on rough roads, narrow winding roads and where there are no roads where the Jimny will truly shine. The Jimny is blessed with 49 degrees of departure angle, 37-degrees of approach angle, and a 28-degree break-over angle, coupled with a 210mm ground clearance. These specs should improve further with a suspension lift as seen on the Old Man Emu lift kit fitted on this particular privately-owned Jimny, and slightly taller tires. I took the Jimny on an empty lot near my home for some impromptu off-roading and suspension flexing and the Jimny confidently covered the tricky terrain with ease. In the hands of professional off-road drivers and with more aggressive tires, the Jimny will be nigh-on unstoppable on difficult terrain.

The brakes are surprisingly very powerful, yet perfectly weighted and easily modulated, while the steering is a bit woolly, slow and high-geared. The rigid-axle 3-link front and rear suspension contributes to these foibles for better off-road durability at the expense of compromised on-road feel and feedback. But it’s so small, that the Jimny remains responsive on emergency maneuvers as well as weaving through slow-moving traffic.

To drive the Jimny is a lesson in lightness and efficiency: it feels light, it feels alive. You need to give it a long leash as the tall body, sat on a narrow wheel track feels like it can tip-over but in truth, it is actually quite stable. I had great fun driving up Tagaytay via the small narrow and steep roads of Silang rather than the usual fast route of Sta. Rosa. You feel the chassis move its weight around the four wheels, but once you get used to the sensation, you feel confident to push harder and faster. With powerful brakes and faithful steering, you can really go flat-out and have fun, even at lower speeds of 60km/h to 80km/h.

In-city driving is also exciting as you find yourself constantly sneaking in between almost non-existent spaces on the road in between slower-moving cars and trucks. And since the Jimny is still a rarity on the road, other motorists would give me space to pass always. 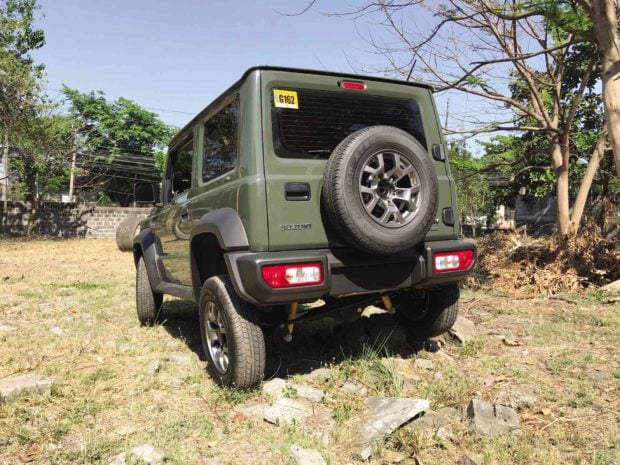 It’s not so peachy perfect to be honest. The A/C system has a high-pressure cold line passing through right beside the exhaust manifold/catalytic converter. In traffic, without flowing air, you will notice the drop in cabin temperature. The insulation on the roof also seems non-existent, so when you’re been parked under the sun for a long time, and move off in traffic, it will take quite a while for the even such a small cabin to cool down. The rear seats are non-existent, and the short wheelbase, coupled with the narrow track width makes serene travel on bumpy roads impossible: you really have to enjoy the bronco ride the Jimny serves up.

The Jimny is a feel-good car. When I brought it to Church a few weeks ago in Greenhills, a number of people approached me to ask about the Jimny as I parked, took photos and peered inside to check the interior. Many will buy the Jimny as a secondary vehicle, a project car or if their daily commute sees them driving solo, or with one passenger at most. It’s perfect in the city, or if you live in the province with no roads, or few paved roads, or very bad roads. But the wait will be long and lengthy, even if the new Jimny has garnered a substantial price hike. This variant costs a shade under P1.1 million, but so many people, particularly 4×4 hobbyists and enthusiasts are hankering for theirs. At this year’s 2019 Tokyo Auto Salon the Jimny was one of the darlings of the show as aftermarket companies modified the Jimny to resemble a mini Mercedes G-Wagen or Land Rover Defender thanks to bodykits and flares plus stylish wheels. You know what’s on everyone’s mind once they get theirs.

Despite its quirks and foibles, I love the Jimny, and there’s a very good chance you will too if you like and enjoy cars and driving!