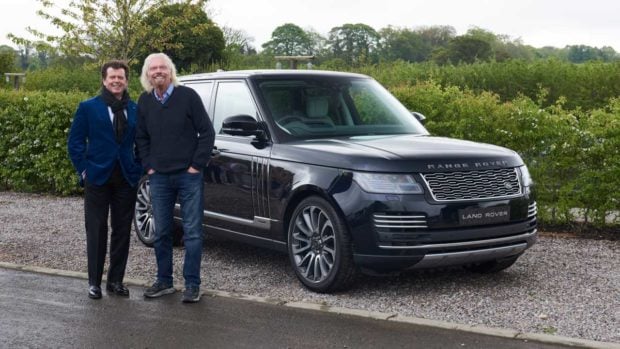 If you’re part of Virgin Galactic’s Future Astronaut community, meaning that you’re an “ordinary citizen” who signed up to fly to space on the company’s SpaceShipTwo aircraft possibly as early as this year, you will have access to a special Astronaut Edition Range Rover inspired by space.

Because the model has been produced by Land Rover’s Special Vehicle Operations and is based on the luxurious Autobiography, it features state-of-the-art technology, as well as unique interior and exterior styling.

#LandRover and our partners @virgingalactic have reached new heights with the #RangeRover #AstronautEdition – created by our #SpecialVehicleOperations team exclusively for the pioneers of the Virgin Galactic Future Astronaut Community. Learn more: https://t.co/hg1FHh0UVZ #SV pic.twitter.com/K6yuS0FgGJ

The outside is painted in Zero Gravity Blue, a color designed to emulate the “depth and intensity of the night sky” and features a puddle lamp illumination that displays the silhouette of SpaceShipTwo.

Additionally, Astronaut Edition badging has been placed on the tailgate and side profile finishers.

The interior features a crafted piece of the front landing skid — which was also used to form two discs inside the cupholders that Virgin Spaceship Unity used on its first flight to space last December.

On the discs are references to the spaceflight and when a future astronaut makes his or her own flight, they will be swapped out for discs made of the skid used in their spacecraft with details written on it about their flight.

A motif representing the spaceflight has been placed throughout the interior, console drawer lid and armrest. A constellation design is present throughout as well.

Future astronauts can choose to purchase the model with a plug-in hybrid powertrain or a V-8 supercharged petrol engine. Neither the price nor release date of the model has been revealed, but it will probably be available at a cost similar to the Range Rover Autobiography which starts at $143,000 (P7.4 million). HM/JB