No child’s play on the killing streets 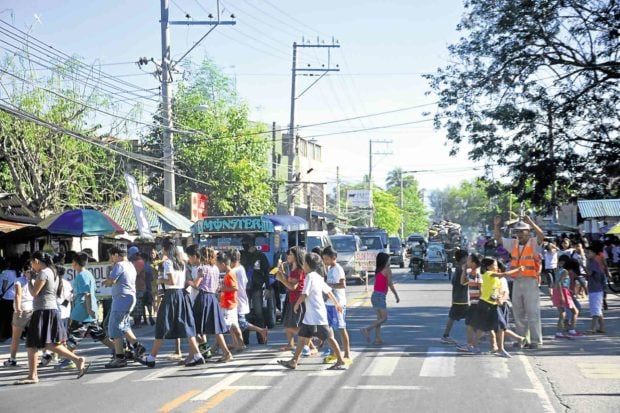 In a few weeks, you will be letting your children off into the streets on their way to school, or entrust them to the school bus, van or trike driver. And for the next 10 months or so, your precious, vulnerable children will be exposed almost everyday to the perils of the Philippine roadways. Whether you or someone else will look after them as they make the transit from home to school and vice versa, the risks are quite the same. They are as numerous as the number of forms of transport.

I think nothing quite matches the horror of seeing another person getting involved in a life-threatening accident on the streets. That horror is increased exponentially when the one involved is a friend, a loved one or a member of the family. I myself witnessed firsthand losing a friend—an 18-year-old college schoolmate—run over by a car along Alabang-Zapote Road in my home city of Las Piñas. I was standing on the sidewalk and saw my schoolmate crossing on the pedestrian lane. The vehicle on the first lane stopped and let her cross, but a speeding car on the second lane didn’t.

I also lost a beloved aunt to a drunken driver a couple of years ago. She was crossing on the pedestrian walk in her adopted hometown in Toronto, Ontario, Canada when the car ran her over. My aunt was well on her way to recovering from a stroke, only to lose her life at the hands of a reckless driver.

And nobody ever wishes to receive a call in the middle of the night, the party on the other line asking us if we are this person or that, and then letting go of the dreaded news that a loved one has died in a road accident.

Dr. Tedros Adhanom Ghebreyesus, World Health Organization director general, wrote of a similar scenario in the foreword of the WHO Global Status Report on Road Safety 2018, launched December of that year. It highlighted that the number of annual road traffic deaths worldwide has reached 1.35 million. Road traffic injuries are now the leading killer of people aged 5 to 29 years. The burden is disproportionately borne by pedestrians, cyclists and motorcyclists, in particular those living in developing countries. The report suggests that the price paid for mobility has become too high, especially since proven measures to avoid injury or death do exist. Drastic action is needed to put these measures in place to meet any future global target that might be set and save lives.

Parents and older siblings and relatives should be especially alarmed at the very young ages when road accidents claim lives. The report said that road traffic injury is now the leading cause of death for children and young adults aged 5 to 29 years, signaling a need for a shift in the current child health agenda, which has largely neglected road safety. Road traffic injury has become the eighth leading cause of death for all age groups, surpassing HIV/AIDS, tuberculosis and diarrheal diseases.

The burden of road traffic injuries and deaths is disproportionately borne by vulnerable road users and those living in low- and middle-income countries, where the growing number of deaths is fueled by transport that is increasingly motorized. Between 2013 and 2016, no reductions in the number of road traffic deaths were observed in any low-income country, while some reductions were observed in 48 middle- and high-income countries. Overall, the number of deaths increased in 104 countries during this period.

Ghebreyesus stressed that “Road traffic crashes are not
‘accidents.’ They are completely preventable. (Yet) the problem is getting worse. Deaths from road traffic crashes have increased to 1.35 million a year. That’s nearly 3,700 people dying on the world’s roads every day. Tens of millions more are injured or disabled every year, people who suffer life-altering injuries with long-lasting effects. These losses take a huge toll on families and communities. The cost of emergency response, health care and human grief is immense.”

He added: “No child should die or be seriously injured while they walk, cycle or play. We must return our streets to our children. They have a right to feel safe on them. In the Sustainable Development Goals, world leaders have committed to halve the number of deaths from road crashes by 2020. This report shows that three years on, far too little progress has been made towards this goal. There is an urgent need to scale up evidence-based interventions and investment.”

Alberto Suansing, secretary general of the Philippine Global Road Safety Partnership, who gives frequent lectures to young road users on pedestrian safety, agreed that traffic accidents involving children have been increasing, but he said that the Philippine data has not been that accurate.

Here’s Suansing’s “12 most important tips to children whenever they’re on the streets:”

1. Do not walk on the streets when it’s dark, or when you are clothed in dark-colored clothes. Dark clothes can hardly be seen by drivers.

3. Be aware of your surroundings. Don’t wear earphones, or text while walking. You need to be aware of passing vehicles. You cannot do that when you are walking and pre-occupied with something else.

4. Children, as much as possible, must be assisted by grown-ups when crossing roads.

5. Pedestrians also must plan, visualize their route, and determine where the danger points are before embarking on it.

6. Cross only on pedestrian lanes.

9. Look to your left AND right before you cross.

10. Make eye contact with drivers of oncoming vehicles, then extend your hand and wave so the driver will notice you and know your intentions.

12. If you’re the adult or parent accompanying the child, always place the child on the safe side, either shielding them from oncoming vehicles (when crossing) or making them walk on the sidewalk side. Always hold the child’s hand when crossing streets.

WHO—in its road traffic injuries data—enumerated the following factors that contribute to serious injuries or deaths in road mishaps: Speeding; driving under the influence of alcohol and other psychoactive substances; non-use of motorcycle helmets, seat-belts, and child restraints; distracted driving (including the use of mobile phones while driving); unsafe road infrastructure; unsafe vehicles; inadequate post-crash care; inadequate law enforcement of traffic laws.

WHO stressed that road traffic injuries can be prevented. Governments need to take action to address road safety in a holistic manner. This requires involvement from multiple sectors such as transport, police, health, education, and actions that address the safety of roads, vehicles, and road users.

WHO’s Global Status Report on Road Safety 2018 presents information on road safety from 175 countries. The global status reports are the official tool for monitoring the organization’s Decade of Action.