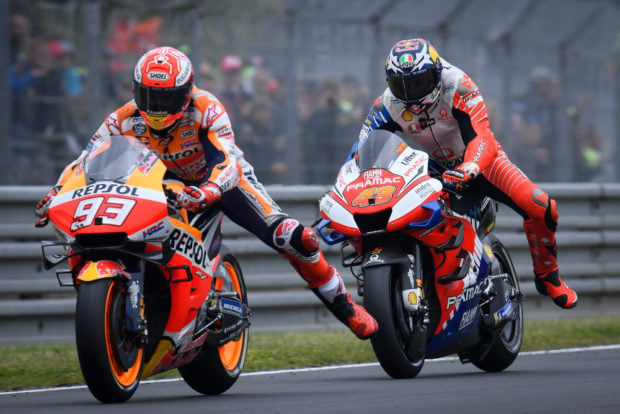 Marquez and Miller duking it out on track

Three Ducati riders, one of whom wrestled the lead for two laps, were duking it out behind him. But at the checkered flag reigning MotoGP champion Marc Marquez of Repsol Honda converted his pole position into a win at last weekend’s Grand Prix de France in Le Mans. Moreover, the victory gifted Honda its 300th premier class win in the sport.

At the start of the race, Marquez and second-place rider Danilo Petrucci of Ducati immediately went toe-to-toe into Turn 3, with the champion barely holding on as the field made it through the tricky left-right without any incident. Marquez, Petrucci and Pramac Racing’s Jack Miller, also on a Ducati, held on to the top three positions in the next few laps. Marquez, though, started to edge out a half-second gap.
Then Miller forced his way past Petrucci and immediately locked his radar on the back of Marquez’s Honda, clocking in the fastest lap of the race, before chucking it up the inside of Marquez at Turn 3 on Lap 5 to pass the champion. Two laps later Marquez returned the favor; both riders ran slightly wide, with Miller getting the cutback to lead again. But Marquez swept up the inside of the Ducati, retaking the lead. Behind the two riders, Andrea Dovizioso, Petrucci’s teammate, and the legendary Valentino Rossi of Monster Energy Yamaha MotoGP were eager to join the fray. 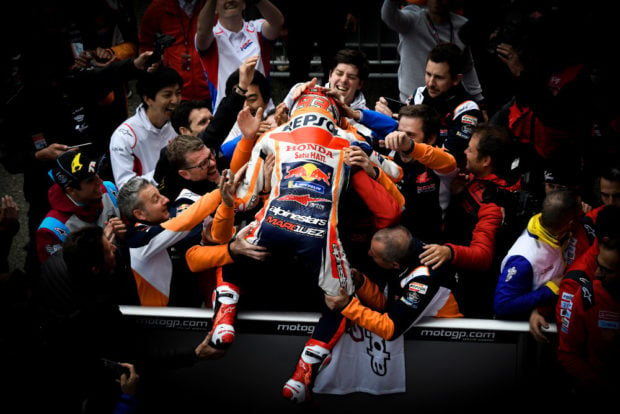 But Marquez, back in the lead, steadily stretched the gap out, eventually setting the fastest lap of the race. By Lap 14, the champion’s lead was already over a second. With victory almost sure for Marquez, it became a race for second place between the three Ducatis, with Rossi not completely out of the equation even if he was back in fifth.

Marquez had built up a nearly four-second gap by the time he cruised to claim his third win of the season — and the 47th of his career (equal to teammate Jorge Lorenzo’s). Dovisioso took second place, Petrucci secured the last place on the podium. 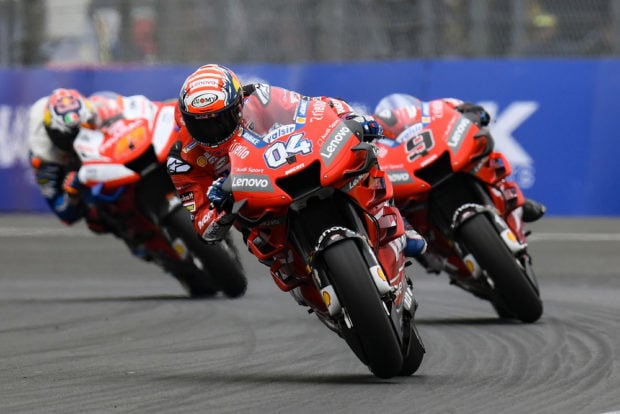 Motogp 03 Dovizioso (04), Petrucci (9) and the rest of the field chasing Marquez

The next race is the Italian MotoGP. It takes place on June 2 in Mugello.