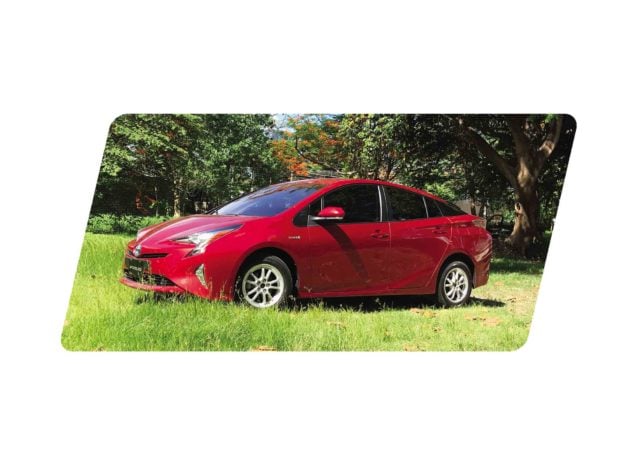 Imagine for a moment, that one day, all cars will be somewhat similar to the Prius: hybrid, if not electric. For tree huggers, concerned about reducing greenhouse gasses, global warming and other harmful pollutants, this might be a triumph of singular, personalized transportation. But to typical car guys, this sounds like the end of car culture. And yet it is inevitable. Cars of tomorrow will be cleaner, greener, more efficient and safer for the environment, and therefore, for ourselves.

But what is it like to drive a hybrid? Is it really slow, cumbersome, unexciting and completely flaccid? Devoid of any sort of drama?

Prius is Latin for first, original or originator. Indeed, it was the world’s first mass-produced hybrid vehicle sold globally, with the United States and Japan being the Prius’ biggest market. Over 6.5 Million Prii (the plural of Prius, according to Toyota) since 1997, representing 60 percent of the 10 million (and counting) hybrid vehicles Toyota has sold, making it the most popular hybrid vehicle in the world. And as government legislation worldwide ease taxation and extend tax incentives and benefits to hybrids (and eventually full EV vehicles), this number will continue to grow. Today, excise tax for hybrids in the Philippines have been halved from their previous rate, although Toyota, along with the rest of the industry, wants excise tax completely cancelled for hybrids, EV’s and the like. Toyota Motor Philippines has said that with full removal of excise tax on hybrids, the current P2.250 million SRP of the Prius can drop to as low as P1.65 million.

The 4th generation Prius uses Toyota’s latest TNGA (Toyota New Global Architecture) modular platform, which features a much lower center of gravity to help handling and stability. A range of plant-based bio-plastics ensure that practically most of the Prius’ interior is biodegradable and recyclable, adding to its eco-friendliness once end-of-life use is reached. The Prius is considered as a full hybrid, as opposed to other mild hybrids, thanks to Prius having a full electric vehicle/battery power mode with a decent range. Other hybrids only give partial assistance to forward propulsion and do not deliver any range extensions or full EV operation. Interestingly, it also resembles the Toyota Mirai FCV (fuel cell vehicle) which was previewed in concept form at the 2013 Tokyo Motor Show. 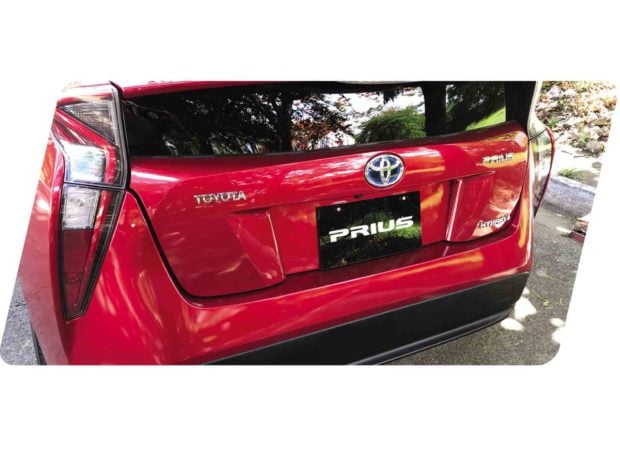 Power comes from a 1.8 liter low heat, low compression Atkins-cycle inline 4-cylinder engine couple with an electric motor. The total combined internal combustion engine and electric motor output is 121hp and 142 Newton-Meters of torque, but this figure is quite misleading as the internal-combustion engine and electric motor peak at varying RPM’s. Behind the wheel, when you step on it, the Prius feels surprisingly energetic and alert. Power is delivered to the front wheels via a continuously variable transmission on special low rolling resistance tires sized 195/65R15 tires mounted on 15X6 alloy wheels.

The inside is surprisingly simple. A large LCD screen mounted on the middle of the dashboard displays drive mode, fuel level, fuel and energy consumption meters and battery charge level of the nickel metal hydride battery which is still cheaper to use than the Lithium Ion batteries used for the previous generation 7-seat Prius V. The leather is a synthetic type that feels cheap but the seats themselves are surprisingly soft and offers very good driving position, something I never would have expected in a hybrid. The Prius’ lift-back/Kamm-tail rear helps give it a very low 0.25 coefficient of drag that ultimately promises to deliver 40 kilometers per liter.
On the road, the Prius feels heavy, as the battery and electric motor weigh down on the car. But the added weight doesn’t sacrifice the Prius’ responsiveness: the mass feels very centered, well within the front and rear axles, thereby reducing its yaw rate, aiding stability even when cornering. Thanks to regenerative braking to charge the batteries, the Prius stops on a dime without need for fancy, massive big brakes. I find myself stopping a few meters shorter than I was expecting in traffic, thus requiring some seat time to acclimatize myself. 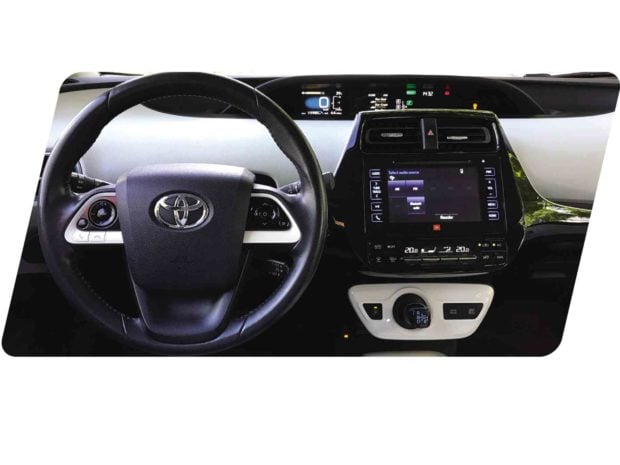 Cockpit that is simple yet futuristic.

The rest of the interior is surprisingly roomy, but the Prius rides low to the ground, almost like a sports car, another one of its party tricks to help reduce drag/wind resistance. It’s part MPV thanks to its spaciousness and part sports car as your knees will get a bit of a strain getting in and out.

Getting in, strapping yourself, you press the START button, and nothing happens. The Prius will initially move in EV (electric vehicle) or battery mode, and if you keep throttle to about 25 percent or less, it will stay that way, and giving you a range of 40 kilometers if the battery is charged up to 60 percent of maximum capacity. At highway cruising, depending on speed, throttle position and battery charge capacity, the Prius seamlessly transitions to pure EV/battery mode, hybrid battery/ICE mode or full ICE mode. You won’t ever feel or notice the hybrid system transitioning from one mode to another, such is the smoothness and seamlessness in operation. In fact, when idling in traffic, you won’t even notice the ICE turning on or off, as the inside is so well insulated, and NVH refinement and isolation impressive. Of course, as with any Toyota, the Prius comes armed with a slew of equipment to keep you safe: seven airbags, ABS-EBD brakes, plus traction/stability control. 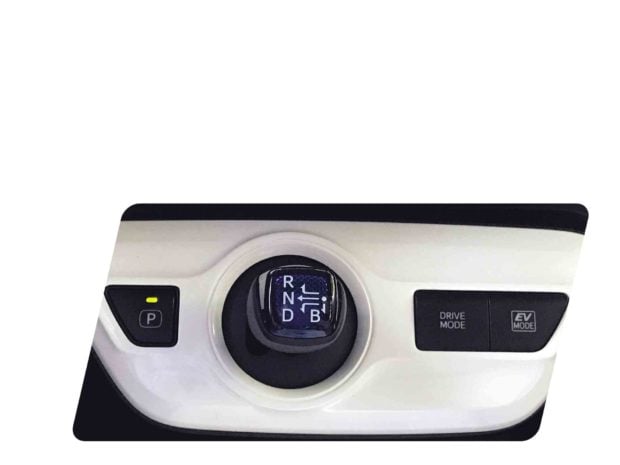 Prius’ lift-back/Kamm-tail rear helps give it a very low 0.25 coefficient of drag.

Driving it, as with any hybrid, gets you into the mood of trying to be as fuel efficient as possible. Efficiency doesn’t mean driving as slow as possible. Quite the contrary: efficiency, in engineering terms, is all about getting the most output with the least input. In the case of the Prius, you aim to get the most speed, momentum and distance travelled with the lightest prodding of the throttle, ideally keeping it in EV / battery mode as often as possible.
Hybrids, EV’s, alternative bio fuels and other renewable energy sources will be the future. Fossil fuels are finite and one day they will most likely go all away. And let’s not forget the environmental impact. We might not be around in the future either if we recklessly consume natural resources and pollute the earth. With the Prius, it might not be the all-conclusive, end-all be-all solution. But it is definitely a step in the right direction. We just need to inject a bit more excitement into these hybrids.