For a motorbike designed for city driving, Mark Philip Benosa discovered that the 160cc-Kawasaki Rouser could also be taken off-road as well as to far flung places where a rider could enjoy fantastic scenery and new adventure.

“I never thought this type of motorcycle could effortlessly handle a wider range of off-road trails. Engine is spectacular and the ground clearance, superb,” says Benosa who was recently declared the grand winner of the inaugural season of Rouser Dare Venture Philippines.

Awarding was held during the live airing of the show’s final episode last June 1 at the Makati Shangri-La Hotel.

Benosa, a long-time Rouser rider from Taguig City, and is regarded as one of the influential riders of the Rouser community, took home the cash prize of P100,000 plus a brand new Rouser NS160, the same model that the contestants rode during the nine-episode journey that could now be viewed at the Rouser Philippines official Facebook page, as well as its official YouTube Channel.

All the Rouser Dare Venture activities were held in Pampanga, particularly in Sapang Bato and Haduan Falls in Mabalacat, and in the Lahar areas around Mt. Pinatubo in Butolan. 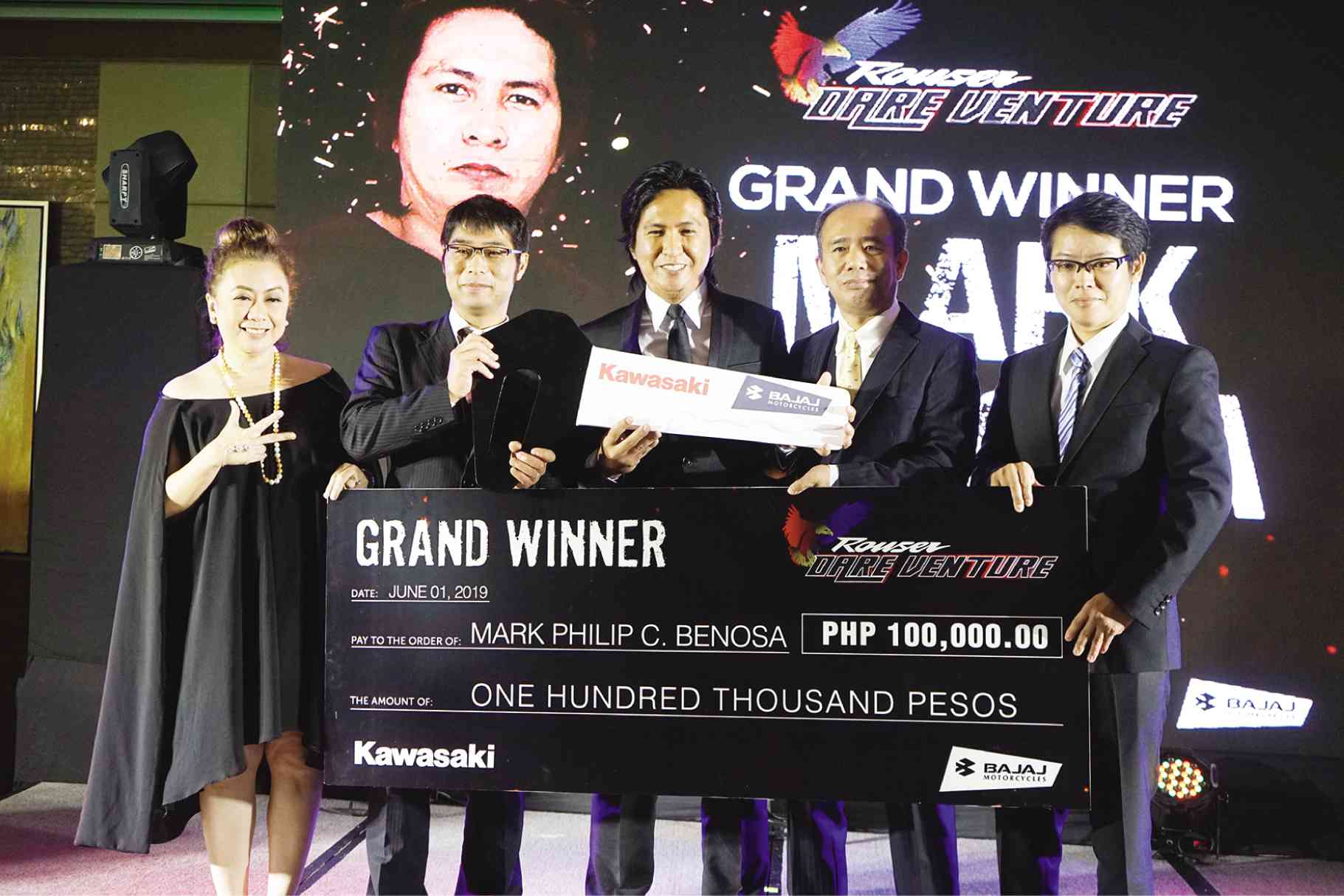 The reality show is similar to what Kawasaki/Bajaj has started in countries like Nepal, Malaysia, Cambodia, and Sri Lanka a few years ago. “The Philippine version aims to deliver a whole new Dare Venture experience that focuses on fun, challenging and intriguing day-to-day life of Rouser riders. All these are mixed with elements of humor, drama, action and suspense,” explains Kawasaki Motors Philippines Corp. (KMPC) Senior Marketing Manager Ruby Macalintal.

The Kawasaki Rouser NS160 units that the contestants rode were stock (any sort of modification was not allowed).

The other winner of the event is Cagayan de Oro native, Henry Malaton III, who at 23-years old, is the youngest rider among the finalists. As the second placer, Malaton is a recipient of the P20,000 cash prize.

The two winners were announced by Rouser Dare Venture Philippines episode host, Zach Lucero, who revealed the rigorous final challenge that the remaining contestants had to face—a combination of motorcycle riding and hiking up to the mouth of Mt. Pinatubo crater.

Joining the two winners during the awards night were the eight other finalists who were eliminated over the course of the nine-episode journey: Mharjorie Andres; Archie Amper Templado; Marcenito Pableo; Rabby Dayrit; Russell Ban; Teddy Lorca III; Ryan Alpet Tiatco; and Cristina Aspan.

The grand awarding ceremony was also attended by representatives from various Rouser clubs all over the country, motorcycle dealers, members of the motorcycle media, and executives from KMPC, headed by its VP for Finance, Yasuhiro Yamada.