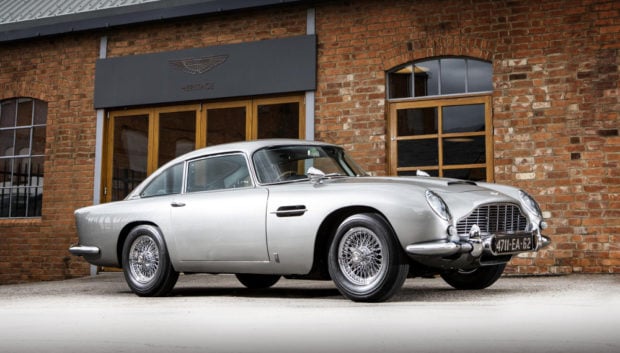 AN original 1965 Aston Martin DB5 James Bond car will be put on a special one-marque RM Sotheby’s auction on August 15 in Monterey, California.

RM Sotheby’s is the official auction house of Aston Martin.

The company will present one of just three surviving examples commissioned by Eon Productions. RM Sotheby’s explained two near-identical cars were built and loaned to Eon Productions for filming.

One car was intended for stunt driving and chase sequences, and so it had to be lightweight and fast. The other car was meant for interior shots and close-ups. This one was equipped with functional modifications created by Stears.

As Desmond Llewelyn’s legendary weapons-master Q would go on to explain to Sean Connery’s 007, the Snow Shadow Gray-colored DB5 was equipped with front and rear hydraulic over-rider rams on the bumpers, a Browning .30 caliber machine gun in each fender, wheel-hub mounted tire-slashers, a raising rear bulletproof screen, an in-dash radar tracking scope, oil, caltrop and smoke screen dispensers, revolving license plates, and a passenger-seat ejection system. Although never used during the film, the car was also equipped with a telephone in the driver’s door to communicate with MI6 headquarters and a hidden compartment under the driver’s seat containing several weapons.

To be put on auction is the car with chassis number 2008/R, one of two ordered for the “Thunderball” movie. The two cars were fitted with all the Stears’ modifications and were shipped to the US to promote “Thunderball.”

After “Thunderball,” these two cars were purchased by collector Anthony Bamford, whose British registration for chassis no. 2008/R remains on file. The Aston Martin build record lists Eon Productions as the original purchaser, with the important designation of being a “Bond Car.”

According to RM Sotheby’s, Bamford then sold the 2008/R car to B.H. Atchley, the owner of the Smokey Mountain Car Museum in Pigeon Forge, Tennessee. The DB5 was featured as the museum’s centerpiece for 35 years. In 2006, RM Sotheby’s offered this Bond car for sale.

Since that time, a well-documented, no-expense spared restoration by Switzerland’s esteemed Roos Engineering was performed on the car.

And now, this truly special DB5 can be yours.