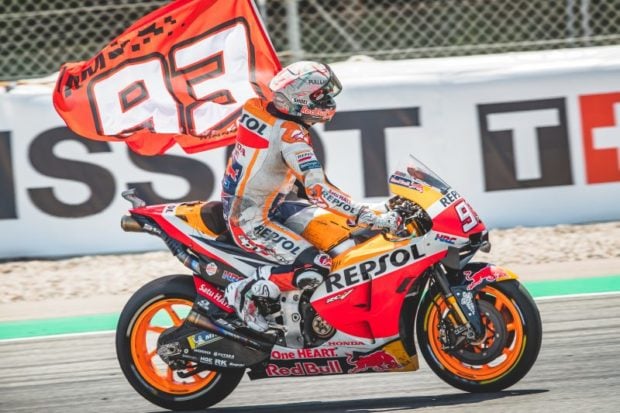 AMID a crowd of compatriots reigning MotoGP world champion Marc Marquez of Repsol Honda won the Grand Prix of Catalunya on June 16 after teammate Jorge Lorenzo took out rivals in a mass crash on the second lap.

Fabio Quartararo finished second and 2.660 seconds behind, after starting on pole and dropping to eighth, for the Petronas Yamaha team. Danilo Petrucci came in third for Ducati.

Marquez’s closest rival Andrea Dovizioso of Ducati and the Yamaha factory pairing of Valentino Rossi and Maverick Vinales went down after Lorenzo lost control of his Honda at turn 10.

The triple MotoGP champion was late on the brakes as he tried to pass Vinales on the inside, first colliding with Dovizioso before the sliding bikes swept up the two Yamaha riders.

Rossi stayed upright as he went wide onto the runoff before Lorenzo’s rider-less Honda hit him.

“I feel really sorry for Maverick, Andrea and Valentino because they are fighting for the championship,” said Lorenzo, who had rocketed from 10th on the grid to fourth after the opening lap.

“It’s a big disaster and I feel sorry for them.” 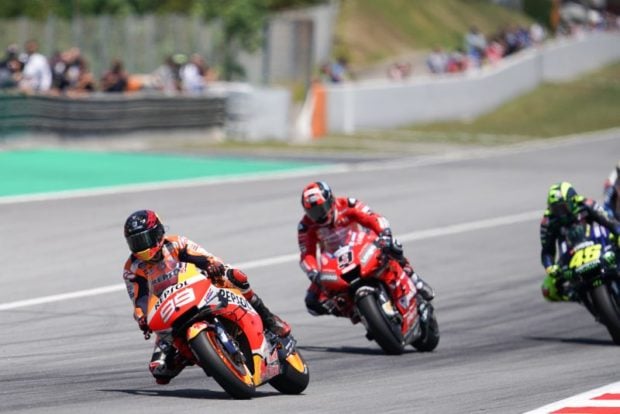 The incident dampened what had been shaping up as a thrilling battle at the front, with three podium contenders abruptly eliminated and Marquez enjoying an easier ride to the checkered flag.

Petrucci, winner of the previous race in Italy, was battling with Alex Rins for second before the Suzuki rider went wide with seven laps to go and fell to sixth before climbing back to fourth.

Quartararo made his move a few corners later and slotted in to second place.

Marquez’s fourth win of the season means he now has a 37-point lead over Dovizioso after seven of 19 races.

The podium was a first for Quartararo in his rookie season and came less than two weeks after he had surgery on his arm in Barcelona.

“It feels incredible,” he said. “It was a really nice race, really tough at the end. Ten days ago we were in the hospital for surgery and now we are on the podium.”