Vetting on the right investment

Chevrolet launched the new Corvette Stingray in the Philippines last November and had a public unveil at the 2019 Manila International Auto Show last April. For almost seven decades, the nameplate is America’s original true sports car and since 1953, from the first generation C1 Corvette to more recent models, classic Corvettes particularly special edition and rare Corvettes have been increasing in value in the last few years, many of these have breached the US$1 million mark at auction houses. Corvettes are considered the “blue chips” of the car collector market and are considered highly desirable, making ownership of these coveted cars very profitable for its owners.

“Corvettes have been America’s sports car and an American icon for generations. People have been collecting them equally as long,” said Craig Jackson, chairman and CEO of Barrett-Jackson. Established in 1971 and headquartered in Scottsdale, Arizona, Barrett-Jackson is considered as one of the leading collector car and automotive auctioneers, which include authentic automobilia auctions, and the sale of high-profile estates and private collections. The company produces auctions in Scottsdale, Arizona; Palm Beach, Florida; at Mohegan Sun in Connecticut; and Las Vegas, Nevada.

According to Jackson, the first- and second-generation Corvettes (1953-62 and 1963-67, respectively) with most of their original components with matching numbers (engine and chassis numbers matching to the original car), big-block 427 engines and fuel injection (“fuelies”) are considered desirable and are very collectible due to their low production numbers. He further added that these models are especially popular with “Baby Boomer” collectors who grew up with them. Meanwhile, well-maintained third-gen Corvettes (1968-82) are becoming more valuable in the eyes of younger Gen X and Millennial collectors. Early- and late-production serial numbers (like those of the first and last 7th-gen Corvette) can increase the collectability of a vehicle as well.

It is easy to see why these cars are so desirable. Owning a Corvette offers a slice of pure Americana with a powerful V8 engine to go along with it. They are fairly easy to restore and maintain and cruises like a dream. All Corvettes of any generation are very quick and fast when the situation calls for it. To further appreciate this, one has to go to Bowling Green, Kentucky and pay homage to the Corvette Museum to see close to a hundred Corvettes including one-of-a-kind prototypes and other rare Corvettes. This writer was fortunate to visit the museum before the sinkhole incident that destroyed several rare Corvettes.

While traditional collector market thinking dictates that a classic car has to be restored back to its original condition using period-correct parts and accessories, Barrett-Jackson notes that there has seen a massive movement and interest in restored and modified (“resto-modded”) Corvettes selling for a high premium. These are usually classic-looking first- and second-gen Corvettes with upgrades such as a modern performance chassis, modern suspension and a fuel-injected engine. These have even made its way to Hollywood, like the highly modified 2nd generation red C2 Corvette that Michelle Rodriguez drove at the last Fast and Furious 8 sequel. “Corvette collectors want that old-school look without sacrificing the modern amenities and power of a modern sports car,” said Jackson. Here’s a list of the most expensive Corvettes ever sold at auctions.

Most Expensive Corvettes Ever Sold at Auction

Here are the nine most expensive Corvettes sold at Barrett-Jackson auctions to date, including five that benefited charities, educational and medical institutes. (All information and photos courtesy of Barrett-Jackson Auction Company.) 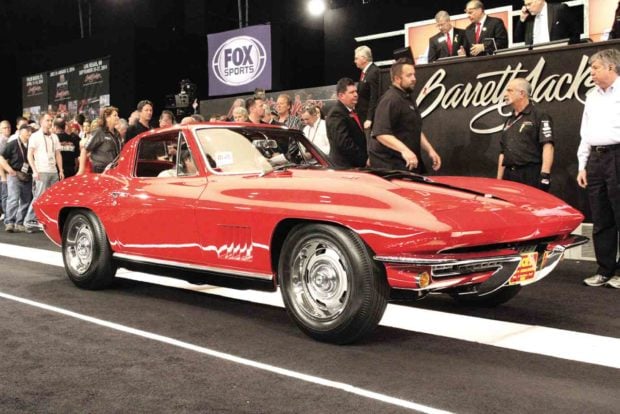 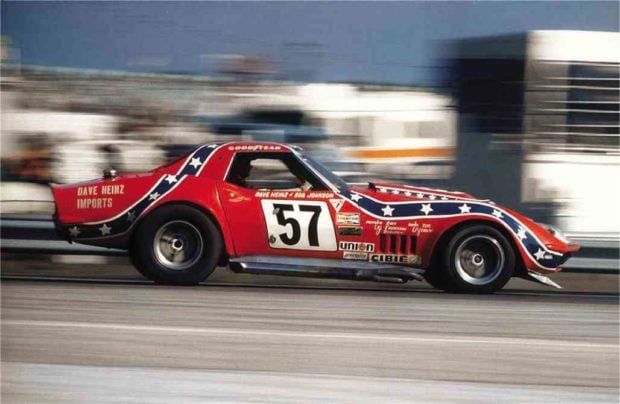 2 – 1969 Chevrolet Corvette #57 Rebel Convertible Race Car sold in 2014 for $2,860,000 USD. It is one of only four lightweight L88s built in 1969, ordered new by professional racer Or Costanzo. This world-record holder won several races and appeared on many magazine covers.

3 – 2018 Chevrolet Corvette Carbon 65 Edition sold in 2018 for $1,400,000 USD, benefiting George W. Bush Presidential Center’s Military Service Initiative. Only 650 Carbon 65 Editions were produced and this one is powered by a 6.2-liter supercharged V8 and automatic transmission. 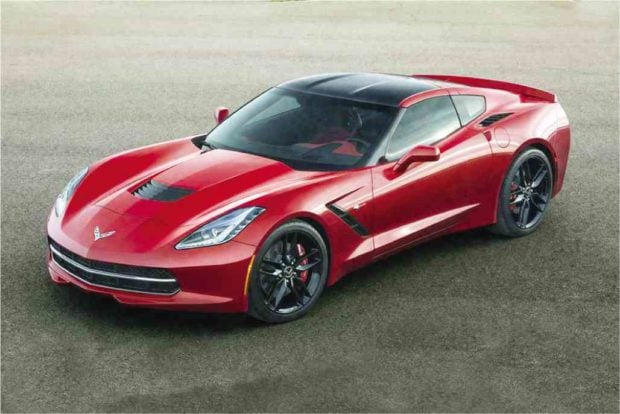 4 – 2014 Chevrolet Corvette Stingray 2 Door Coupe “First Retail” sold in 2013 for $1,100,000 USD, benefiting the College for Creative Studies in Detroit, Michigan. At the time, the C7 was the most powerful and most capable standard model Corvette ever produced.

5 – 1965 Chevrolet Corvette Cutaway Coupe sold in 2018 for $1,100,000 USD. This unusual vehicle began its life as a road-ready production model, but was fully disassembled and rebuilt as this one-of-a-kind display stand for use by GM and Chevrolet on the auto show circuit. 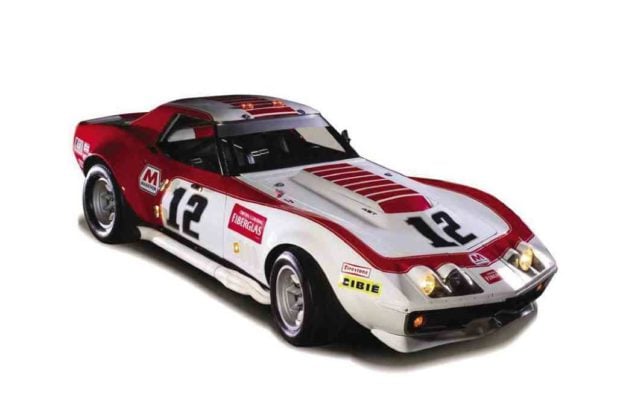 6 – 1968 Chevrolet Corvette L-88 Owens/Corning Racecar sold in 2013 for $1,100,000 USD.  It holds the title as the most victorious Corvette in history, driven by racing legends Tony DeLorenzo, Jerry Thompson, Don Yenko and Gib Hufstaeder.

8 – 2014 Chevrolet Corvette Convertible “First Retail” sold in 2013 for $1,000,000 USD, benefiting Karmanos Cancer Institute.  It offers an open-top driving experience with no compromise in performance, technology or design, with nearly identical power-to-weight ratios and structural stiffness to the coupe.

9 – 2019 Chevrolet Corvette ZR1 sold in 2018 for $925,000 USD, benefiting Stephen Siller Tunnel to Towers Foundation and Building for America’s Bravest. It is the fastest, most powerful, most advanced production Corvette ever produced, incorporating select technologies born from Corvette Racing.