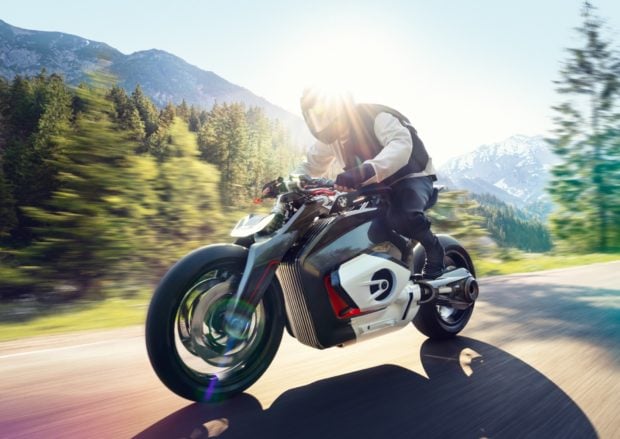 This was a step BMW was destined to take considering its recent expansion of emissions-free cars and SUVs. As expected, the iconic boxer engine which has become a representative of the Motorrad brand has been replaced with an electric motor and battery, but not without retaining some characteristic design cues.

Riding pleasure in a new and electric dimension. Get ready for the Vision DC Roadster! #MakeLifeARide #VisionDCRoadster #neverstopchallenging #BMWMotorrad pic.twitter.com/cVOLbTpFGU

According to BMW, the company “retain[ed] the iconic appearance of a boxer while filling it with a new function.” Only when looking closely can one tell that the bike is powered by a battery instead of a gas engine.

The low front and high rear give the concept a sporty yet light disposition. Exposed mechanical components are reminiscent of classic Motorrad design though they have been reinterpreted for a more emissions-conscious world.

The concept was unveiled with complementary protective gear that at first glance, “stands as a modern, emotional fashion statement.” The sewn-in protectors are nearly invisible thanks to the large graphics and iridescent finish.

The Vision DC Roadster represents the future of BMW Motorrad, an attempt to translate the company’s identity which has been built on gas-powered models into a bike with an entirely new powertrain. HM/JB

Audi to swap out TT for all-electric model