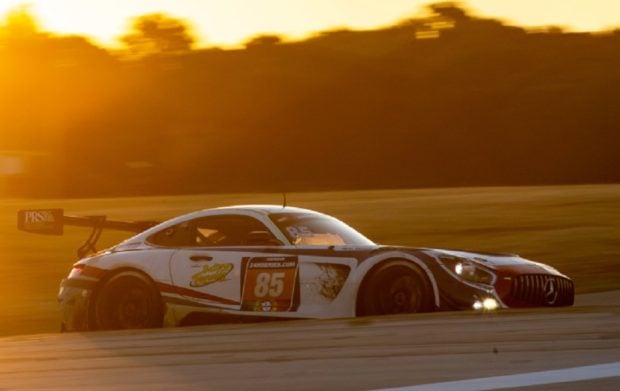 The Mercedes-AMG GT3 of CP Racing team in racetrack action.

THE Mercedes-AMG Formula 1 team is now in Silverstone, home of British motor racing, and which hosted the first premier class race 69 years ago. It is also one of two home races this month for the team; its factories in Brackley and Brixworth are practically beside the historic track.

Mercedes-AMG said it has logged recent successes at Silverstone — between 2013 and 2017, Silver Arrows have won the British Grand Prix five times in a row. Four of these victories were clinched by Briton Lewis Hamilton. To date, Mercedes counts 11 wins at Silverstone.

Ahead of this Sunday’s race, Mercedes is also hyping events which transpired leading to Silverstone.

At the Goodwood Festival of Speed last weekend team drivers Valterri Bottas and Esteban Ocon wowed the crowd with donuts and burnouts as they drove the F1 W08 up the famous hillclimb course. Besides this, Mercedes also brought out a 300 SLR that won the 1955 Mille Miglia, a W125, a W165 R, a W196 R Streamline and the 2018 DTM championship-winning Mercedes-AMG C 63 DTM at the festival.

Mercedes said its teams also won in the Blancpain GT World Challenge Asia as Solite Indigo Racing celebrated their second victory of the season at the Fuji Speedway. The number 99 car of Craft-Bamboo Racing also took third place. A second-place finish in the Silver Cup brought more points for Mercedes-AMG in the GT World Challenge, and the Triple Eight Race Engineering team rounded off a successful weekend for the Mercedes-AMG GT3 in Japan with a second place in the Pro-Am class.

In North America Mercedes said its teams performed strongly in the IMSA WeatherTech SportsCar Championship and the Michelin Pilot Challenge. Elsewhere in Europe its teams scored podium finishes and a victory in the GT4 France and the GT Cup Open Europe.

A one-two finish by Mercedes-AMG F1 in Silverstone this Sunday should cap these successes superbly.