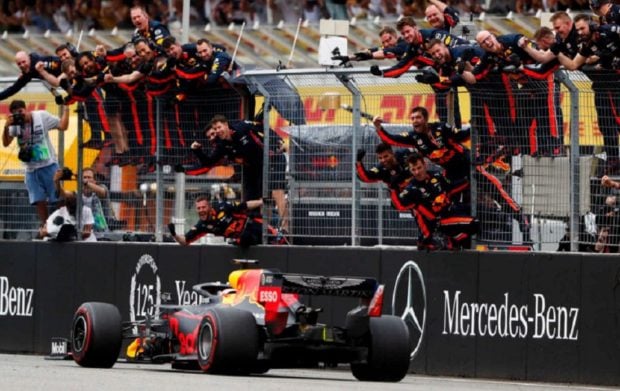 EXACTLY 25 years ago Jos Verstappen escaped death at the 1994 German Grand Prix at Hockenheim; his Benetton burst into flames while it was being refueled during a bungled pit stop. On Sunday, Red Bull Racing’s Max Verstappen, Jos’s son, emerged as winner of a chaotic race marked by crashes, off-track excursions and numerous outings of the safety car, no thanks to intermittent rains that made the Hockenheim track less of a track, more like a pool.

Following Verstappen on the podium were Ferrari’s Sebastian Vettel, who excellently managed his pit stops, tire choices and strategy after failing to qualify due to mechanical troubles and thus had to start 20th on the grid, and Toro Rosso’s Daniil Kyvat, who came in third after surviving the chaos.

Verstappen started the race in second place on the grid, with Mercedes-AMG’s Lewis Hamilton on pole. But because the track was soaked the grid took three formation laps before it was allowed a standing start.

Verstappen flubbed his start. Hamilton and teammate Valtteri Bottas both made good ones, with the latter passing Verstappen immediately. The troubled Ferraris, with Charles Leclerc starting from 11th, also began to make their way up the grid — by the second lap Leclerc was sixth, Vettel was 13th.

Then the mayhem started. The first of four safety car periods happened on Lap 3 as Racing Point’s Sergio Perez crashed. A mad scramble at the pitlane ensued as drivers switched tires.

Hamilton remained on top. Leclerc eventually took second up until Lap 28, during a virtual safety car stretch. A lap later, Leclerc crashed out of the race, bringing out the safety car for the second time. This gave drivers struggling with slick tires the chance to pit for intermediates. On the same lap, Hamilton crashed near the pit entrance but managed to enter the pitlane. He changed his car’s nosecone.

Verstappen, already on fresh tires, led the race behind the safety car. By Lap 37 he was seven seconds clear of Bottas, but Hamilton was faster. A lap later it rained again.

On Lap 41 Renault’s Nico Hulkenberg slammed into the barriers in front of his home crowd, again drawing out the safety car. Verstappen, Hamilton and Bottas led the race.

Then the track started to dry out, prompting another scramble for tire changes. By Lap 47 Hamilton, Alfa Romeo’s Kimi Raikkonen and Vettel led the field. Shortly after, though, Hamilton and Vettel pitted for tires, too.

It came in after two laps with Verstappen leading the race. He never looked back as he took the checkered flag on Lap 64. Championship leader Hamilton finished in 11th out of the 14 cars which survived.

Mercedes, empty-handed in its 200th start and 125th anniversary in motorsports, had won nine of the previous 10 races. Only Verstappen had been able to beat them this year.