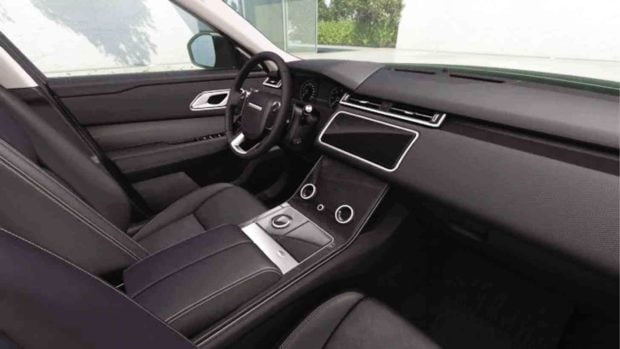 The Range Rover is the luxury SUV line of Land Rover noted for on and off-road performance and impressive design inside and out. Rovers have always been a pleasure to drive and the Range Rover Velar (pronounced as vee-ler) is no exception.

The Velar is the newest Land Rover and the 4th model of the Range Rover line whose price range is slotted below the top Range Rover and Range Rover Sport, but above the Evoque. The Velar is a compact luxury crossover SUV that rides on the Jaguar Land Rover D7a platform that is also used by the Jaguar F-Pace. The F-Pace has sportier intentions but the Velar is longer and leans towards Land Rover’s off-roading capability requirements.

The interior is beautifully finished, but getting into the Velar is like getting into a mid-sized Jaguar sedan rather than a traditional Land Rover, so watch your head a bit. That’s the price you pay for a chiseled look and chopped-top proportions. The interior features a dual touchscreen center console interface with piano black finishing that goes to the edges of what is being called a “floating console” design.

My test unit was the base Velar D180 which had the 2.0 diesel with 180hp and 430Nm of torque, rotary-knobbed 8-sp auto transmission and all-wheel drive with Terrain Response. Ride comfort was great despite not having the height adjustable air suspension of the pricier variants. High-speed refinement was excellent even at higher triple-digit speeds. Seats were Light Oyster Perforated Grained Leather and Ebony Suede with 14-way driver memory front seats. (The 2-liter diesel in the Velar D180 was very refined and you would not initially think that it’s an oil burner, until you see the low redline of the tachometer. A criticism of the D180 variant is that it needs more power especially at the P5.8-M price point. Forking out this much dough needs more oomph than just 180hp. Also, where are the front cup holders? There seems to be only one for the front occupants to share.

Driving the Velar on-road was more Jaguar than Land Rover. It’s a Land Rover that can still go off-the-beaten-path yet drives like luxury car. Best of both worlds? Truly especially if a light-footed SUV that makes an excellent daily driver is what you’re after. It is neither overweight, bulky, nor seats seven. Yes, I dislike 7 or 8-seater SUVs unless you really need them. And, on the way to the office, even if you had a driver, a 5-seater is enough, and the fact that it looks great and drives well, is what makes the whole experience delightful.

The Ranger Rover Velar starts at P5,890,000 for the base D180 variant, but with a stroke of luck and a membership card, you might just have the chance to win a Range Rover Sport or Range Rover Velar this August as Resorts World Manila (RWM), is set to give away brand new units of each via the Extreme Rovers promo.

RWM members must simply earn at least 50 points from selected games in gaming floors at the Garden Wing, Grand Wing, and Holiday Inn Express to earn from one to a maximum of 50 raffle entries a day, without point deductions.

The Extreme Rovers promo is exclusive to RWM members. For more information, visit www.rwmanila.com or download the RWM Mobile App for free via the Google PlayStore or the iPhone App Store.

Those not willing to try their luck can visit www.landrover.ph and purchase the Velar and other Jaguar-Land Rovers from All British Cars, Inc.