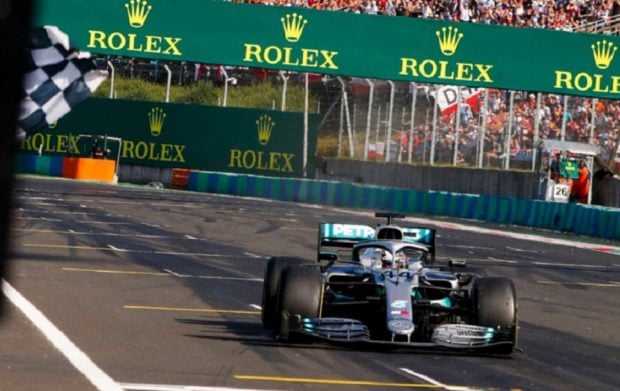 IN a track notoriously difficult to overtake on — it has been called “Monaco without walls” — starting position is everything.

But Mercedes-AMG proved at Sunday’s Formula 1 Hungarian Grand Prix that strategy could be just as crucial in winning Hungary as Mercedes driver and championship leader Lewis Hamilton secured his eighth victory of the 2019 season.

Hamilton qualified only third, behind teammate Valtteri Bottas in second and Red Bull Racing’s Max Verstappen on pole. For Verstappen, who arrived in Hungary as winner of the German GP held only a week before, this was his first pole in Formula 1 (in the process he became the 100th driver in the series to secure a pole position).

And for much of the race it did look like he would convert that pole into the eighth win of his F1 career.

At the start Verstappen got away cleanly as the two Mercedes cars battled with each other. Bottas lost to Hamilton and also hit Ferrari’s Charles Leclerc, who had started in fourth. The collision damaged the Mercedes’s front wing. On Lap 6, already having lost several positions, Bottas pitted for a new wing and hard compound tires.

In front, Verstappen had a comfortable lead over Hamilton, with the two Ferraris — the other being that of Sebastian Vettel’s, which started in fifth — running a race of their own. On Lap 25, Verstappen pitted for hard compound tires. Six laps later, Hamilton also switched to hard compounds. Both kept their positions.

But for Verstappen, that pit stop sealed his fate.

By Lap 35 Hamilton was already on Verstappen’s gearbox, with the Mercedes almost passing the Red Bull at Turn 1 on the following lap. Vettel and Leclerc, meanwhile, were a distant third and fourth, respectively.

On Lap 39 Hamilton had another go at Verstappen, making an ambitious attempt on the outside but had to give the place back. Vettel pitted and rejoined in fourth.

The pivotal point for Hamilton came 10 laps later when Mercedes called him in for fresh tires. The move caught Red Bull off-guard, and the team was visibly at a loss whether it should react on the following lap and bring Verstappen in for new tires — and lose the lead to Hamilton in the process — or keep him out and see if Hamilton could catch its driver.

Twelve laps later Red Bull’s strategy started to unravel. By Lap 62 of the 70-lap race Hamilton was only 7.8 seconds behind Verstappen, who at that point was struggling with his worn tires.

“Tires are dead,” Verstappen said on the team radio, on Lap 64. By then his lead had dropped to 5.5 seconds. A lap later that advantage came down to only 3.5 seconds. Hamilton was back at his gearbox after one more lap.

On Lap 67, Hamilton at Turn 1 finally made a clean pass on Verstappen, whose tires had completely gone away he could not even put up a resistance. Red Bull finally called him in for new tires.

From there all Hamilton had to do was to take the checkered flag.

Verstappen followed him home, with Vettel managing to pass Leclerc to secure the final step on the podium. The Ferraris were around a minute behind.

With the win, Hamilton extended his drivers’ championship lead by 62 points over Bottas, or 250 points versus 188 points. Verstappen narrowed the gap to Bottas with 181 points to his name. Vettel has 156 points, Leclerc 132 points.

In the constructors’ race Mercedes has a commanding 438 points against Ferrari’s 288 points. Red Bull has 244 points.

Formula 1 now goes on a summer break and will come back on September 1 for the Belgian Grand Prix.