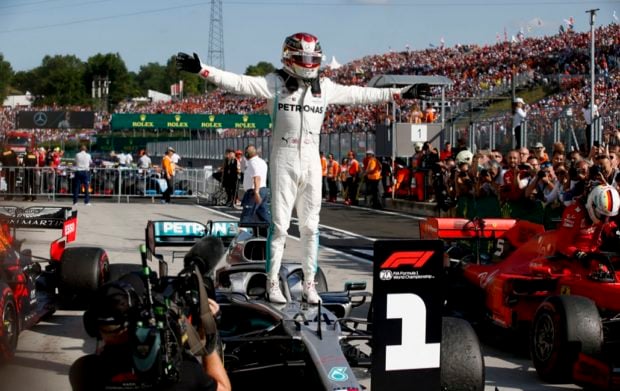 MERCEDES-AMG driver Lewis Hamilton, after winning Sunday’s Formula 1 Hungarian Grand Prix, said he would take a different approach to the sport’s summer break — the next race, the Belgian Grand Prix, is still on September 1 — to ensure he comes back stronger than ever.

Meditation and reading more books are part of the recovery plan.

Hamilton goes into F1’s August break on the back of eight wins in the first 12 races.

The five-time world champion has never had a season so good, but the driver expects a stiffer challenge from Red Bull Racing and Ferrari when he returns to the track.

The 34-year-old said he was still not fully fit after struggling with a bug that “wiped me out” at the German Grand Prix weekend before Hungary, and he needed to sort that out.

“I think in the past I’ve gone into this break and I was 100% fit and I could go and party for multiple days and then go into the recovery and stuff,” he said. “But I’m actually not in that place at the moment.

“I’ve got to make sure I get my energy back.”

Hamilton said he would be spending a lot of time with family and planned to change his habits to become less nocturnal.

“I like staying up late because I don’t really sleep a huge amount. So I want to try and focus on shifting that and waking up early and seeing the sunrise wherever I am,” he said.

“I might try meditation, just a few different things. A healthier lifestyle and my close, good friends around me will be doing the same. I’ll be doing a lot more reading. I’m excited about it.”

Hamilton has a 62-point lead over teammate Valtteri Bottas with nine races remaining, compared to a 24-point advantage over Ferrari’s Sebastian Vettel at the same point last year. This may mean a sixth world drivers’ title for him.

Never before has Hamilton won more than seven of the opening 12 rounds, but he is not about to rest on any laurels.

“Eight wins in the first half of the season is obviously exceptional. But I look at those races and say ‘eight out of 12, there’s still some missing’,” he said. “So how did we miss those ones, how were we not perfect on those weekends?”

Hamilton asked everyone in his team to e-mail him with suggestions on where he could improve, and he said he would do the same.

“I want the second half to be even stronger than this first half,” he said.

Hamilton has historically picked up pace after the break but Hungary indicated he will not have it all his own way.

While Budapest brought an 81st career win — 10 short of Michael Schumacher’s all-time record — it took a strategy gamble and some superlative driving to reel in pole-sitter and leader Max Verstappen, who drives for Red Bull Racing.

Verstappen had won two of the previous three races, has finished in the top five for 21 races in a row and his Honda-powered Red Bull is getting better and better.

“All of a sudden we’ve had this big step up from the Red Bulls and now we’ve got a really good battle on our hands,” said Hamilton. “And it looks like it’s here to stay.

“I think Ferrari will come back into play in some of these other long races, like Spa and Monza. They will be quick on the straights and there’s not a lot of corners. Those places I think they will be really strong.”