Access Plus ‘optimistic’ as it heads to ARRC Zhuhai round 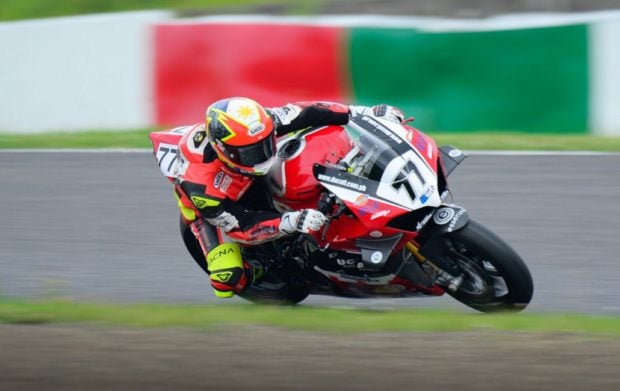 THE Access Plus Racing-Ducati Philippines-Essenza team said it is optimistic of its performance as it heads to the fifth round of the Asia Road Racing Championship (ARRC) on August 9-11 at the Zhuhai International Circuit, citing its riders’ “string of improvements.”

The team also expressed confidence on the advantage the Ducati Panigale V4Rs will afford its riders — Timothy Joseph “TJ” Alberto and Jonathan Serrapica.

It explained the pair of Ducati Corsa-sourced machines are some of the most powerful bikes on the current ASB1000 grid. Both feature a 998cc 90-degree V4 Desmosedici Stradale R engine rated at 217hp and 112Nm. The homologation special of the standard Panigale V4 is also fitted with MotoGP16-derived carbon fiber aerodynamic appendices that increase stability.

Access Plus said these should be well-suited to the 4.319-kilometer, 14-turn Zhuhai track. The Panigale V4R can “capitalize on its power advantage on Zhuhai’s sequence of long straights,” according to the team.

“The entire team is optimistic heading to Zhuhai. We definitely have a power advantage with our Ducati Panigale V4R, which suits the track layout very well. We also now have a better understanding of our new machines after spending four rounds in development. Hence, our goal this weekend is to prepare TJ and Jonathan the bikes we can to give them the best chances on track,” said team principal Toti Alberto.

Access Plus noted TJ Alberto was able to move up to ninth in the overall standings while Serrapica holds on to 15th after the ARRC round in Japan in June. In Zhuhai, the riders focus their attention on bringing the fight to the front-runners in ASB1000, the team said.

“I think we have an advantage with the Panigale V4R’s power as this circuit is mainly comprised of long straights. We were able to make quite significant changes to the bike, and if we have a good setup, there’s a good chance we could improve on our results from Japan,” Alberto said.

For his part, Serrapica said it’s “time to convert this performance into results and improve more in the final three races of the year.”

“Zhuhai is a track that I have never seen before, but I feel positive and hungry for a good race weekend,” he said.