911, RC-F, or Evora? Have money, will enjoy weekend fun with a supercar

Lotus is the master for chassis and handling dynamics

Long weekends and holidays are a big event for many car guys. Since typical weekends are also already hectic, the addition of a third non-working day frees up a lot of time to do other activities. Golfers will play golf, families will use it as an opportunity to travel out of town or even out of the country for a quick break, and car guys will drive.

The weekend that just passed was pretty incredible as I had the chance to drive with four other cars for a quick cruise down south, have a light breakfast, try out the other cars, and decide for myself what car I’d buy if I won the super lotto. Unfortunately, I never place a bet, am poor at gambling, and have less than stellar luck when it comes to raffles. Might as well just keep burning the midnight oil then.

Our motley crew consisted of three Germans: two late-model 991 generation Porsche 911’s, a Turbo S and a GT3RS variant respectively, and an old E63 BMW M6 coupe with the amazing V10 engine. We also had a Japanese companion in the form of a Lexus RC-F, and finally, my Toyota-powered steed, Lotus amazing Evora 2+2 Gran Turismo, which made for an interesting mix of cars.

The Lotus Evora 400 has the least power in this company with 400hp from its supercharged 2GR-FE engine, the same engine that powers the Toyota Camry and Alphard MPV’s. However, a supercharger is slapped onto this 400 model, and the numbers denote the output of 400hp, along with 410 Newton-Meters of torque from the engine. Drive is sent to the rear wheels via an Aisin 6-speed automatic with Intelligent Precision Shift. Stopping the lightweight, aluminum chassis coup are AP Racing brakes all-around. The exhaust sound is amazing, making it arguably the second-best sounding car in this group at wide-open throttle. Blasting down the EDSA-Ayala Tunnel is a real treat! It feels like a go-kart, with instant turn-in, sharp and precise responses from the chassis and suspension. It doesn’t have any fancy active suspension systems, but Lotus is the master for chassis and handling dynamics, and the lightweight yet ultra-stiff aluminum tub made of 6000 Series alloy metal, riveted and bonded, using special adhesives to each other is ultra firm and stiff, allowing the suspension to operate from a very firm base. It has arguably the most turn-in sensation in this group. The Lotus feels like a toy, weaving through traffic with ease and confidence. The brakes are powerful, stop on a dime, and thanks to the modest (by today’s standards) 1,442kg weight, the brakes barely break any sweat driving flat-out. Coupled with Michelin Pilot tires, the Lotus, with its low weight, low center of gravity, and compact dimensions stick to tarmac like flies to flypaper. You have to drive it to believe it. Lastly, the automatic transmission might be a letdown for some seeking the ultimate in driving performance and feel, but in reality, it makes the Lotus a very liveable option for daily driving duties, if you would use your sports car daily that is. Traffic driving is amazingly easy and effortless, and it’s punchy enough to give the right sensations when going flat-out. Budget around P10-12 million pesos if you want one of these British bad boys. 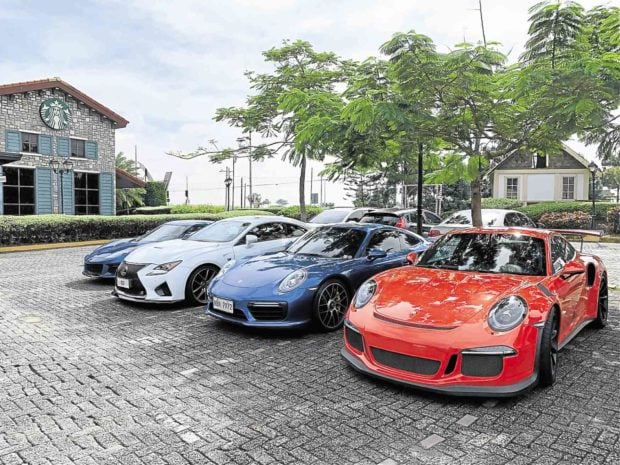 Next up are the two Porsches. The Turbo S and the GT3 RS are so similar, yet so different. The uninitiated would easily mistake one for the other. And both are powered by an amazing direct-injected flat-six engine delivering power to the wheels via a 7-speed dual-clutch PDK transmission. And that’s where they branch-off. The Turbo S delivers insane speed, tractability and usability on all paved road and weather conditions, is reliable enough to make a Toyota blush, and is supremely comfortable, having all the luxurious refinements one would expect from a modern day Gran Turismo. There is of course the matter of 580hp and 700 Newton-Meters on tap, ready to deploy depending solely on your courage. If ever there was a sports car to travel the world, this is it. All that technology, performance and ability comes at a hefty price tag to the tune of P14-16 million. A newer 992 Generation 911 Turbo S is supposedly coming early next year, but even so, this ‘older’ model is still fast, desirable, and a real keeper.

The GT3RS variant is essentially a race car with license plates. Open the door, and the bucket seats borrowed from the 918 hypercar will straddle your legs and the family jewels. The roll-cage is another hint at how serious it takes performance. The double-staggered 20-inch front and 21-inch wheels, shod with super sticky Michelin Pilot Sport Cup 2 semi-slicks should also give you an indication that it performs best in dry, cool weather and on smooth surfaces. And the sound it makes is savage, like ripping up sheets of paper, wound up to 11, as the engine revs close to 9,000 rpm, all the while building power progressively, yet resolutely. Despite having a little more electronic aids, the GT3RS feels far more raw, far more brutal than the Lotus Evora 400. It also costs more, much more. The PDK 7-speed transmission allows you to focus more on driving fast and hard, without removing your hands from the steering wheel while attacking corners with confidence and controlled aggression. If you want a deadly weapon as a toy, look no further than this. On a long drive over our typical roads, it is tiring because of the stiff chassis, stiff suspension and seats practically devoid of any padding. But it still delivers the greatest thrills, sounds the best, and handles like it’s on rails! And yes, this is my absolute favorite in the group. It is also a good financial investment in the long-term, as GT3RS models of all generations continue to rise in price, thanks to their rarity worldwide versus regular 911 models and other sports cars. Just be ready to spend roughly P16-18 million pesos for this 500hp equipped, naturally-aspirated flat-six engine coupe!

The last car in the group is the Lexus RC-F. My friend had modified his with BBS alloy wheels, and a modest NIA Designs body kit, plus a bombastic exhaust system matched with an induction kit, making the genteel Lexus show much more of its wild, playful side. The V8 rumble could be heard clearly but unlike typical American V8’s, the Lexus V8 still sounded cultured, refined and intense all at the same time. It is arguably the most comfort-focused vehicle in this group, draws the least attention, is also the cheapest to own and maintain for the long-run, and the sedan-based coupe means the overall height isn’t absurdly low unlike the Porsches and the Lotus, making it the best sporty car to use everyday, assuming you can live with the gas bill of a V8! At a shade under P6-million, this is somewhat of a bargain in the group. And of course since it’s a Lexus, it will be as reliable as death and taxes.

I didn’t include the BMW M6 because it an old model and I wasn’t able to drive it due to lack of time but believe me, the V10 sounds equally impressive in its own right!

Objectively speaking, it’s hard to say which car is best because none of them are directly comparable to each other. But subjectively, each car appeals to a different audience, a different enthusiast.