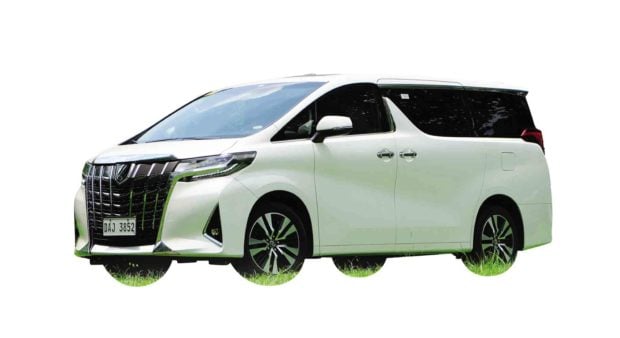 The Toyota Alphard seems to be synonymous with a lot of things. In Hong Kong and Macau, it is associated with gangsters and gamblers. In Japan, according to a Japanese-American friend of mine, a black Alphard is a favorite among the Yakuza, which is why regular Japanese folk tend to buy the sportier Vellfire model, not the black Alphard. 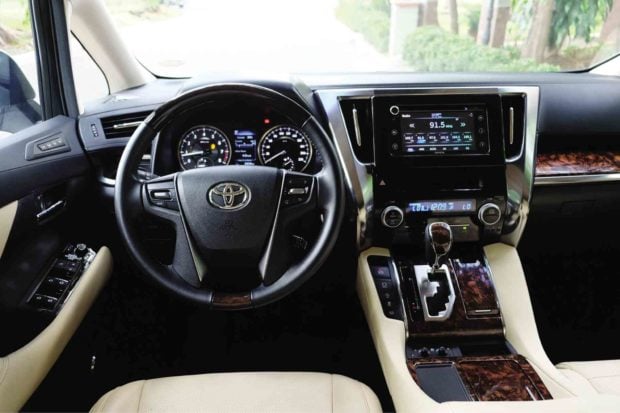 Now that the elephant is out of the way, there’s good reason why the Alphard is in great demand. Previously, Toyota enjoyed massive success with the first-generation Fortuner. They could not sell enough of it. Then the LC200 Land Cruiser came out, and the affluent and well-heeled flocked to it in droves too. There were also other Toyotas that enjoy great demand such as the Camry, the Previa, and the Land Cruiser Prado. All these vehicles were in great demand with very limited supply. Today though, their demand has normalized versus supply. But the Alphard remains as rare, as difficult, and as desirable as ever. This difficulty in getting the Alphard just adds to its allure. Having one is like announcing to the world that you are powerful, important, and influential enough that you were able to secure a unit from the dealership ahead of everyone else.

The driving experience in the Alphard is somewhat akin to riding in a Rolls-Royce or Bentley. You are so well-cocooned, so isolated from the world, you seem to exist in a vacuum outside of reality. Sure, the ride is firm, thanks to the massive (for a mini-van / MPV) 18-inch wheels and low-ish profile 235/50R18 tires, especially on broken tarmac or EDSA with its lumps and bumps. But it feels serene somehow, cloistered from the outside world. The ride in the ottoman-equipped second row is even better, On a short drive from Pasig to BGC on Father’s Day, me and my wife took my Dad out for lunch and my old man immediately fell asleep, wishing to himself that he could buy an Alphard of his own to take on long drives to Tagaytay or Baguio in full comfort. According to him, when you’re close to fully-reclined, there’s less weight on stress on one’s hips and bum, and spread out evenly across your backside, easing pain and tension, and washing away bad vibes from your body. 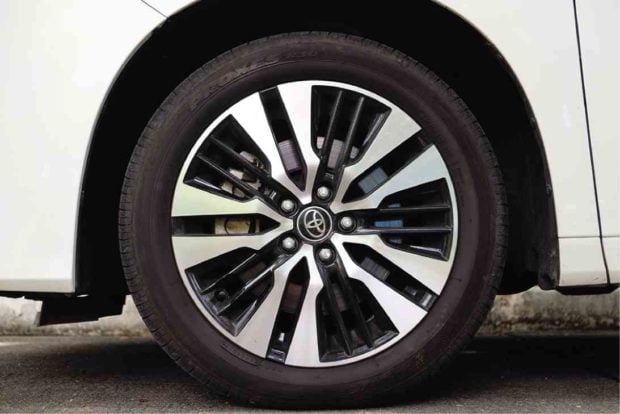 Power comes from a 3.5 liter V6 engine code-named 2GR-FKS which is an evolution of the 2GR-FE. It drives the front wheels via an 8-speed automatic transmission, outputting right around 275hp and 340 Newton-Meters of torque. In other countries, the Alphard is advertised with even more power at 300hp, and more torque at 360 Newton-Meters. Methinks the difference here is due to the fuel quality used. Hence, if you use higher octane unleaded (97 or better), power should rise noticeably as well. The 8-speed automatic helps in-car acceleration in city driving, giving it the urgency at low speeds, plus the long legs needed on the highway.

Perhaps the Alphard’s biggest worry is fuel consumption. But with practice, I was able to coax out roughly 5 kilometers per liter in the city with heavy traffic, and a decent 8.75 kilometers per liter on my regular drives down south to Tagaytay. Your driving style and strategy should change, meaning lots of coasting, lots of drafting, and trusting in the suspension to carry you through the sweepers, while keeping all four tires planted on the road, avoiding braking as much as possible, and avoiding excessive aggressive acceleration. Surprisingly, this driving style suits the Alphard’s character, amplifying its ghost-like wafting abilities.  There is an idle START/STOP function for the engine, but it doesn’t really work in the Philippine context as it will just kill the expensive battery sooner. 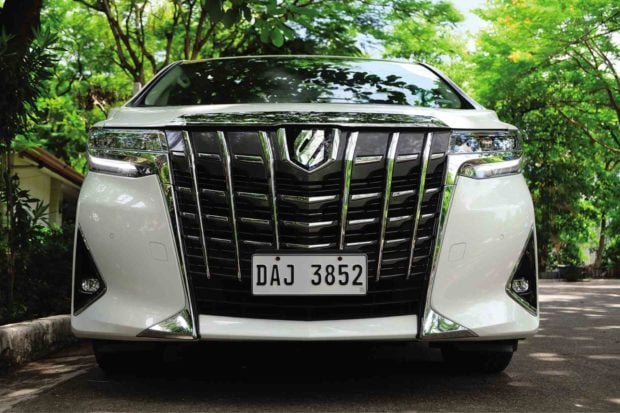 Outside, the massive front grill, dominates your attention, and the slab-sided profile’s monotony is broken up by ingenious creases on the electrically operated sliding doors and wheel fenders. LED lights front and rear, give the Alphard a futuristic and high-tech look, capturing the essence of modern-day Japanese pop-culture, tied with traditional clean, timeless design that is universally appealing, at least to its intended market.

Inside, the Alphard is blessed with a plethora of safety equipment, including seven (7) airbags, ABS-EBD brakes, traction / stability control, and hill-start assist. I’m quite surprised though that Toyota skimped on installing a rear-facing reverse camera, which would make a world of difference maneuvering this big beast in tight parking slots. Thankfully, our friends at Parts Pro sell a plug-and-play reverse camera for the Alphard that works with the existing OEM multi-media system. The flaxen / beige interior mixed with some faux wood and black accents also works, sitting well with the Alphard, it’s intended use and intended target market (mature and moneyed), although the light color attracts dirt easily, making maintenance somewhat of a nightmare. If you’ve got expensive designer jeans which leave their dye on soft, supple, leather, you’d best avoid wearing those in the Alphard. 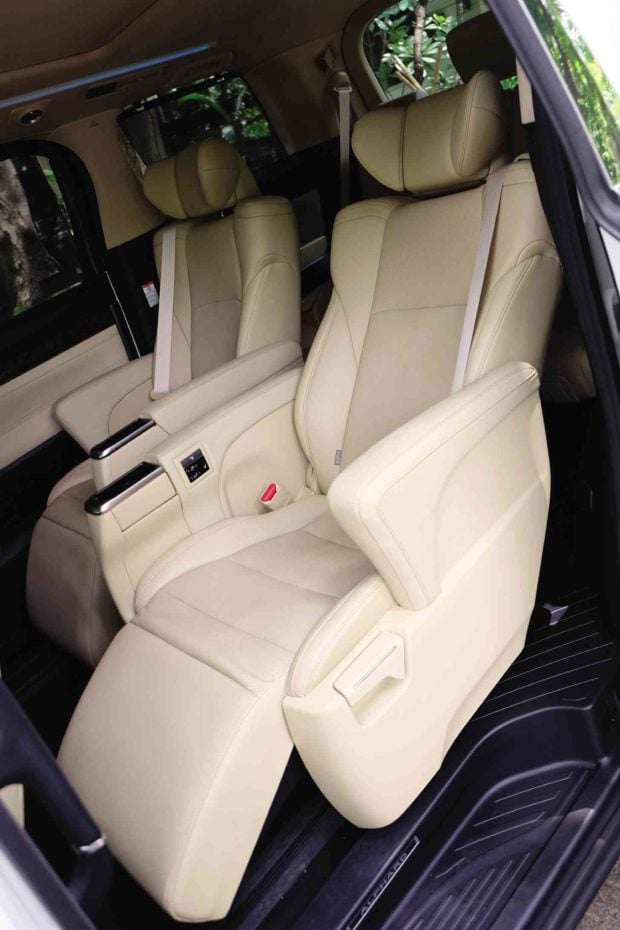 The Alphard is perfect if you can afford it, afford the fuel bill and have a driver. In traffic, sitting in the back seat, break out your laptop or mobile device, get to work in absolute peace and comfort. On long drives, recharge yourself, get some sleep and arrive feeling refreshed. Even as a driver, the Alphard delivers a commanding view of the road ahead, and people naturally move away because it projects an aura of power, grace and confidence on the road. Riding in the Alphard trumps most business class airlines for comfort and space.

And yet because it is a Toyota, it doesn’t shout its presence, unlike how a European marque brand would. It’s a Toyota, the people’s car from Japan, building some of the most reliable cars in the world. There’s that appeal to it. Sure, the masses can tell it costs more than your average Innova or Grandia, but how much more exactly is anyone else’s guess. But it won’t cost more than a modestly-sized and furnished home, unlike many of the luxury European brands.

Perhaps deep down inside, despite the Filipino’s shy, retiring demeanor, we all want to be a bad boy/Yakuza in our deepest darkest fantasies, wielding power and authority, with a devil-may-care attitude, yet trying to appear as a peaceful, responsible and respectable member of society. Just like how the Yakuza in Japan are trying to project themselves nowadays. Maybe. The Alphard will help channel that mysterious, and admittedly romantic dark fantasy of ours on the road. But dark fantasy or not, the Alphard is the gold standard of comfort in the Philippine motoring landscape among mass market brands.