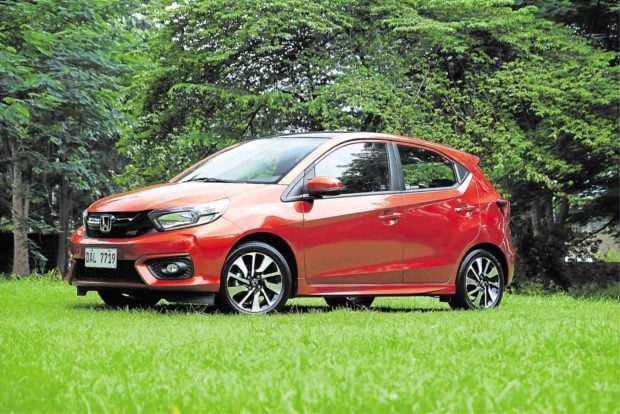 Honda is perhaps the master of small hero cars. The Honda CR-X started a revolution in autocross and circuit racing many decades ago, followed by the Honda Civic which today continues to dominate in grassroots motorsports, followed by the Honda Jazz. Today, the Brio RS is the brand’s torch bearer in the small car performance / enthusiast segment.

The second generation Brio still utilizes the same platform of the first generation model, but has grown considerably in places you and I can appreciate. The Brio has grown in length by 205mm, with wheelbase in particular growing by 60mm, more than 2 inches. It seems small, but if you’ve ever tried to sit in the first-gen model for more than an hour, and compared it to the second-gen model, you will appreciate the added legroom and headroom of the new model, thanks to an extra 15mm of overall height increase found mostly in the interior cabin. Cargo space has also increased considerably, with an available 258 liters of cargo space with the rear seats up, and as much as 710 liters with the rear seats folded flat. More than enough space for solo drivers, newly-wed couples starting out, or even a young family with one child, and all the necessary gear one needs for kids. Pundits might criticize the parts sharing of the new Brio RS with the Mobilio, and some parts from the previous-gen Brio, but it’s not something major that detracts from the visual impact and overall driving experience. Overall, the new Brio RS looks sharp, mature, sophisticated yet still hinting at an exciting driving experience in this segment.

And it is decently spec’d from the factory. The infotainment system is pretty good with AM/FM radio, USB connection and Bluetooth telephony and six speaker system. Automatic climate control is also available on the RS model. The seating position is, even for an entry-level Honda, spot-on perfect, with good alignment of your shoulders on the steering column and wheel, and a low seating position to accentuate that sporty feel. A bit more support would have been a welcome addition to keep you in place on winding roads, but the seats are indeed very comfortable for long stints behind the wheel.

ABS-EBD brakes are standard, as well as dual front airbags and automatic speed-sensing door locks. Speaking of door locks and window switches, one of the areas Honda skimped on the Brio is the lack of illumination of some of the buttons. At night, you find yourself fumbling through the switches, looking for the right one to unlock the doors or open the windows to pay the toll on the highway. Small things do make a big difference in our normal everyday lives. 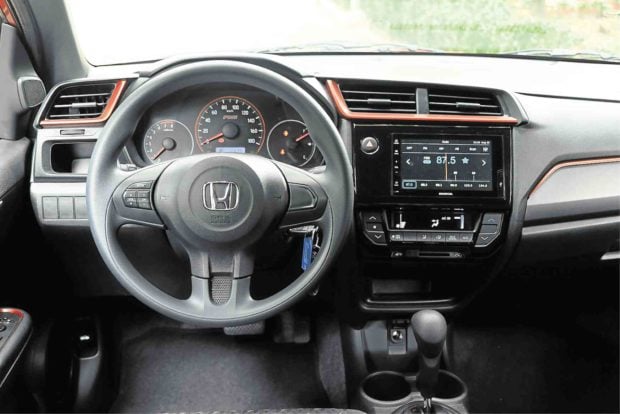 Any Honda is always powered by a mighty fine engine that is a paragon of efficiency, smoothness, reliability and longevity, and the Brio RS’ heart does not disappoint. Output of the new 1.2 liter Earth Dreams II L12B i-Vtec engine is a modest 89hp and 110 Newton-Meters of torque, driving the front wheels via a CVT transmission in RS trim. Performance is more than adequate, thanks to the Brio’s light 992kg curb weight. Though power is down, it doesn’t need much to lug itself around anyway. And as we know, Hondas have always excelled in corners, and the Brio RS is no slouch through the twisty bits. The only complaint I can throw at it dynamically is on throttle- tip-in, the CVT reacts quite sluggishly off the line, but picks up steam quite well once on the move.

But once on the move, the Brio truly lives up to its name. In Italian, the word Brio means verve or vivacity, and once on the move, the Brio seems to be on your side to keep you from stopping at all cost, easily sneaking through tight spaces to overtake, requiring only a modicum of brakes to help transfer weight and slow down, and the steering feels alive and light at the same time. No other small car in this segment lives up to the Brio RS’ fun-to-drive factor. Even regular commutes in the city feel fun and energetic in the Brio, allowing you to squeeze through traffic jams, and find parking in the most unusual of spaces. As the late Colin Chapman of Lotus F1 and sportscar fame once said about improving a car’s performance, ‘light is might’ and ‘just add lightness’ rings very true with the Brio’s overall package.

And the fuel efficiency is equally as impressive: on the city, I get a surprising 10km/liter, and on my short stint on the highway, the Brio delivered an impressive 17.5 kilometers per liter despite being restricted to 60-80km/h on SLEX, and a traffic-riddled drive up the Santa Rosa-Tagaytay Highway. Coming home, downhill, and fuel efficiency was an unbelievable 25km/liter thanks to lots of coasting, tucking in behind trucks and buses on the highway, and almost never needing to brake, thanks to all the spaces and openings available to such a small car. Momentum is on your side with the Brio RS, and with its quick, agile chassis, responsive steering and light curb weight, it is easy to do so, a real walk in the park. Its true element would be winding roads such as the one through Tagaytay and Batangas, or Marilaque Highway where lightweight, precision and agility mean more than outright power. Alternately, with a manual-transmission-equipped Brio, a typical autocross might be good, or tight circuits such as Tarlac Circuit Hill would make for the Brio’s natural hunting ground, surpassing bigger, heavier and more powerful cars. Of note also are the Bridgestone Potenza REO30 all-season performance tires sized 185/55R15 which deliver exceptional grip in most paved road and weather conditions. You can see Honda had performance in mind, rather than outright fuel efficiency by installing low rolling-resistance rubber on the 15’ allow wheels. And they look good too! Sounds like the perfect weekend warrior then, right? Much like how the original Honda CR-X and Civics were back in the day. The growing popularity of ‘Thai’ culture, despite some of its questionable modifications, means aftermarket support for cars like the Honda Brio will grow, and make it a popular choice for enthusiasts.