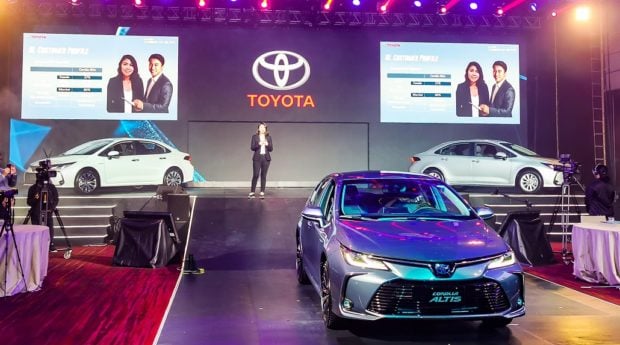 EXACTLY a decade after Toyota Motor Philippines (TMP) introduced the second-generation Toyota Prius (some consider the original Prius as “gen zero”), the company now brings out the hybrid-powered version of a mainstream nameplate.

Launched on Monday were five variants of the Toyota Corolla Altis, and topping the lineup is the Corolla Altis 1.8 V HV, a gasoline/electric hybrid car. This version costs P1.580 million (P1.595 million if in pearl-white paintjob) while the entry variant, the 1.6 E M/T, is priced at P999,000. 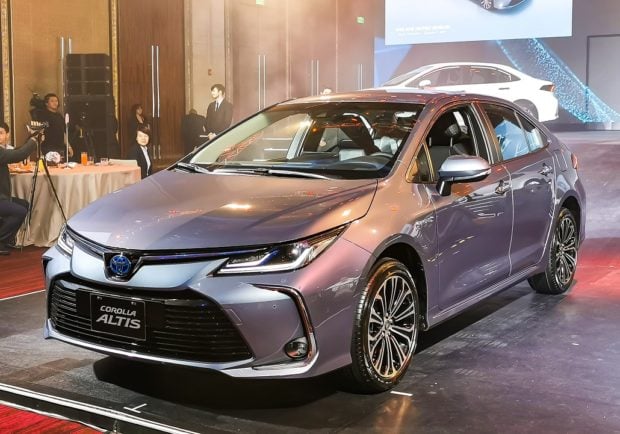 TMP’s introduction of a hybrid-powered Corolla Altis forms part of the company’s efforts at complying with the Toyota Environmental Challenge 2050. This is Toyota Motor Corp.’s (the brand’s head office in Japan) global initiative aiming to lessen by 90%, compared to 2010 levels, the carmaker’s global CO2 emissions average coming from the operation of vehicles. It also calls for completely eliminating CO2 emissions in Toyota production plants, and in the manufacturing and disposal of vehicles. It intends to develop better recycling technologies for end-of-life vehicles, too.

A step toward the 2050 goals are some 2030 targets, which include reducing by at least 25%, when compared to 2013 levels, the amount of CO2 emissions generated by a vehicle over its life cycle. By 2030,Toyota is also targeting to sell more than 5.5 million electrified vehicles, a million of which will be fully electric-powered.

TMP is already employing efforts meant to meet the 2030 and 2050 targets. These include improving TMP’s supply chain, logistics and dealer operations through enhanced compliance with environmental regulations, reducing the number of trips for parts and vehicle deliveries, and using more energy-efficient appliances in dealerships. The company is also now partly reliant on solar energy, has been treating its wastewater in the plant, and is recycling select vehicle parts. The company has been cultivating forest reserves in Laguna as well.

Certainly, a key component in meeting the target is by increasing the number of Toyota (and Lexus) hybrid models sold locally. The Corolla Altis hybrid heralds this “new hybrid era,” TMP said, noting the model marks the first time the Toyota Hybrid System is “made available in a mainstream, high-volume model.” 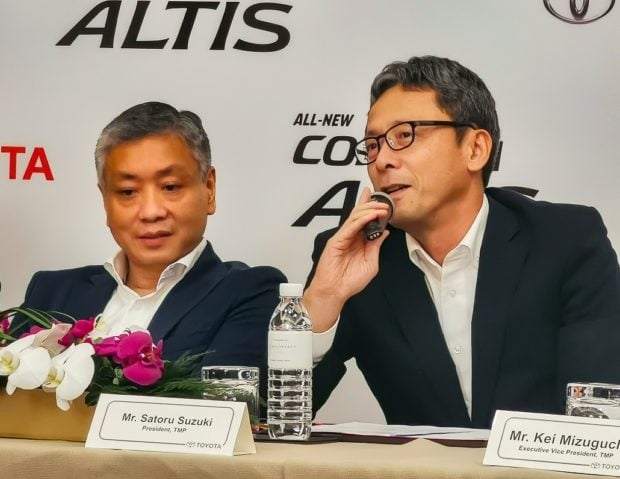 The powerplant of the Corolla Altis 1.8V HV is a combination of a gasoline engine — a four-cylinder, 1.8-liter with Toyota’s VVT-I variable valve-timing system — and an electric motor. Together, the two propulsion systems make 121hp and 142Nm. Sending the output to the front wheel is a CVT.

Also, the battery lasts the lifetime of the car — or more than 200,000 kilometers. Floods? Well, a hybrid car will drown in waters deep enough to drown cars with conventional engines.

The powerplant of the Corolla Altis hybrid has three driving modes; Eco, Normal and Sport. An EV mode means the car can be driven solely on electric power. If the system senses the battery is about to get drained, it would automatically switch the engine on.

Besides the Toyota Hybrid System, the Corolla Altis — not just the hybrid variant — gets two more of the brand’s technologies. The first is the Toyota New Global Architecture (TNGA) platform, which means the car has a lower center of gravity and a suspension system that does not lean to one side too much when the car is cornering, and is rigid enough to make switching directions quicker. The platform also ensures better visibility via a lower cowl, a thinner instrument panel, and repositioned mirrors. Sound insulation is improved as well.

While kitted with the usual array of safety systems like plenty of airbags, stability control and hill-start assist, the new Corolla Altis also features the Toyota Safety Sense, or TSS. The second nameplate, after the Hiace, to get this suite of advanced safety systems, the Corolla Altis boasts of a Pre-Collision System, Lane Departure Alert and Automatic High Beam. The Corolla Altis 1.8V HV also gets Lane Tracing Assist (LTA) and Dynamic Radar Cruise Control (DRCC).

TMP explained LTA helps keep the vehicle centered within the lane while using DRCC. It applies force on the steering so the driver stays on his or her lane.

DRCC ensures the vehicle remains at a constant preset speed and will adjust accordingly to maintain a safe distance from the vehicle ahead. It can also fully brake the car in certain circumstances.

The Corolla Altis variants with conventional engines are powered by a four-cylinder, 1.6-liter gasoline mill that outputs 121hp and 153Nm. Matched with the engine is either a CVT or a six-speed manual gearbox. All variants are propped by MacPherson struts and double wishbone suspensions.

TMP said it expects the Corolla Altis hybrid to make up just a small percentage of total Corolla Altis sales — especially in the next several months. But, then, influencers do start with only a few followers, right?