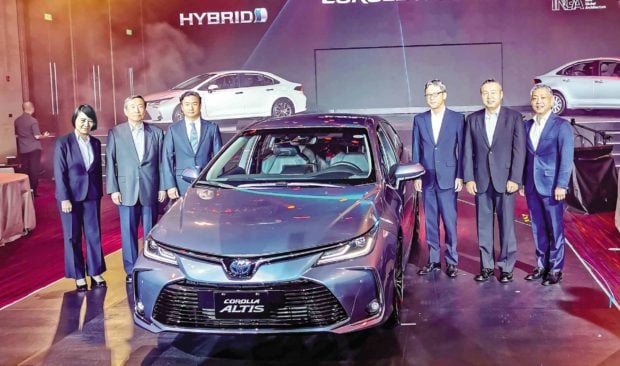 Toyota Motor Philippines (TMP) hosted a lavish event last Monday not only to launch the full model change of the Corolla Altis, but more important, to usher in Toyota’s new hybrid era.

Out with the old hybrid era, in with the new: In 2009, TMP was the first automotive brand to introduce hybrid technology in the Philippines when it added the second generation Prius hybrid electric vehicle (HEV) to its lineup.

The Prius C, a subcompact hatchback version with a 1.5-liter gasoline engine and a 60 hp electric motor, was introduced later, with a lower price tag of P1,907,000.

To raise public awareness of hybrids and push usage of HEVs locally, TMP held the Toyota Hybrid Electric Technology Conference at the Grand Hyatt in BGC with the theme “Toward Sustainable Mobility.”

At the conference, TMP promoted HEVs as being more fuel efficient than traditional petrol engine, and their self-charging capability requires no additional infrastructure to be built in order to seamlessly start the transition to the hybrid era and adapt to quickly changing times. 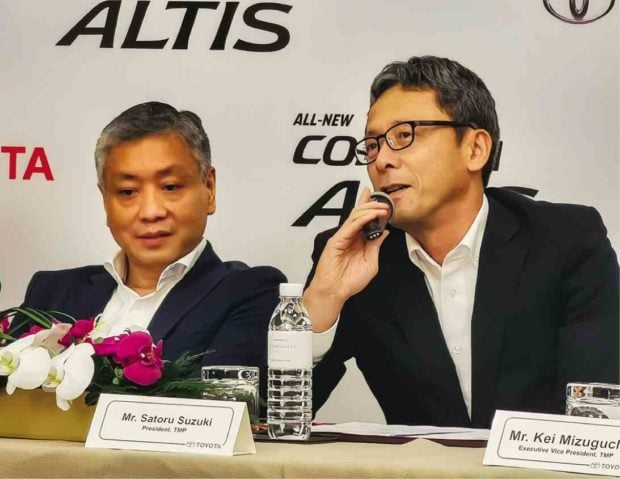 Suzuki fields questions during a press conference as Atienza listens.

A PRELUDE. It appears now that the multi-sectoral conference, which highlighted the Toyota Environmental Challenge 2050 that aims to eliminate Toyota’s carbon emissions by the next three decades, was a prelude to the launch of the 2020 Corolla Altis in two powertrain versions: HEV and ICE (internal combustion engine.)

Altis, both HEV and ICE variants, are made in Thailand, their customs duties are lower compared to the Prius, which is imported CBU from Japan. Lower tariffs mean lower retail prices and greater chances of making a sale.

The availability of the

Corolla HEV is key to popularizing hybrid vehicles since before its arrival, the prices of HEVs like the Prius and six Lexus hybrid models were too high for the average car buyer.

TMP hopes to sell 300 units of the Corolla per month, and projects that hybrids will make up 7 percent of total Corolla sales by 2022.

MARKETING MANTRA. The marketing campaign of the 2020 Corolla Altis is premised on the mantra: “Our New Hybrid Era Begins.” But it’s not only hybrid technology that TMP is enthusiastically promulgating with regards to the new Corolla Altis. Speaking at the launch, TMP president Satoru Suzuki stressed that the new Corolla is the first in TMP’s product lineup to feature three of Toyota’s latest technologies in one variant: Toyota New Global Architecture, Toyota Safety Sense, and hybrid technology. 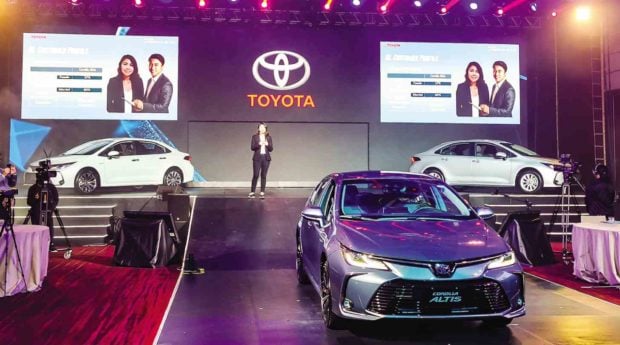 TMP Vice President Elijah Marcial taking the media through the historical and technical details of the Corolla Altis.

He said that the 2020 Corolla “completely embodies our Philosophy of Ever Better Cars. With Toyota New Global Architecture which is the new standard of design and engineering, it provides Ever Better Performance. With Toyota Safety Sense, it offers customers Ever Better Lives. And with Hybrid Technology, it helps create an Ever Better World.”

The logical conclusion: “The Toyota Corolla Altis is a technologically advanced vehicle marking the beginning of a new Hybrid Era… It is a good entry point for Filipino customers to shift to HEV technology.”

MARKET SITUATION. Meanwhile, the market and sales situation, according to TMP veep for marketing Elijah Marcial at the launch, is that the Philippine automotive market averages -35,000 units per month, over 30 percent of which are passenger cars (PCs).

But with the intro of the 2020 Corolla Altis, TMP aims to regain the No. 1 spot in the compact PC segment.

Counting on the Corolla’s loyal brand following and proven legacy, TMP would easily sell the technologically advanced ICE variant as prices start from P999,000 for the entry-level 1.6E MT and top off at P1,185,000 for the 1.8V CVT – prices that are competitive with its rivals. 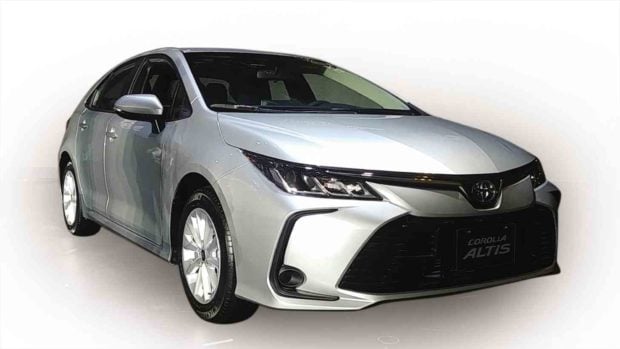 By launching the Corolla HEV and making hybrid technology more accessible here, TMP is not only ushering in a new hybrid era, but also doing its part to meet the Toyota Environmental Challenge 2050 where People, Cars and Nature can co-exist in harmony.

To raise the level of public awareness of hybrid vehicles, TMP has lined up special projects including educational campus tours of top engineering schools in the country.

The HEV variant would certainly attract attention when displayed at shopping malls, where TMP sales staff can distribute information brochures on the 2020 Corolla Altis.

In the long run, usage of environment-friendly and energy-saving HEVs will benefit many sectors of society such as energy, transportation, environment, and health.