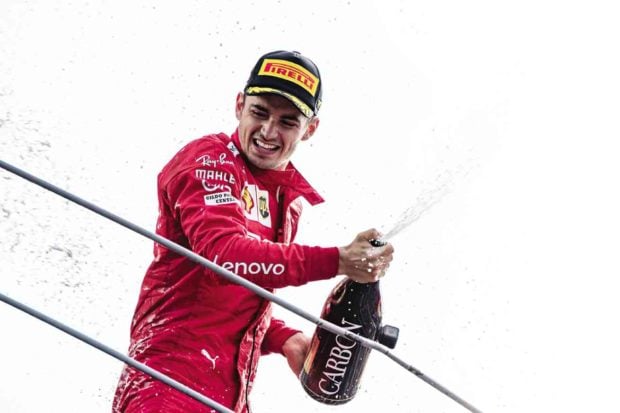 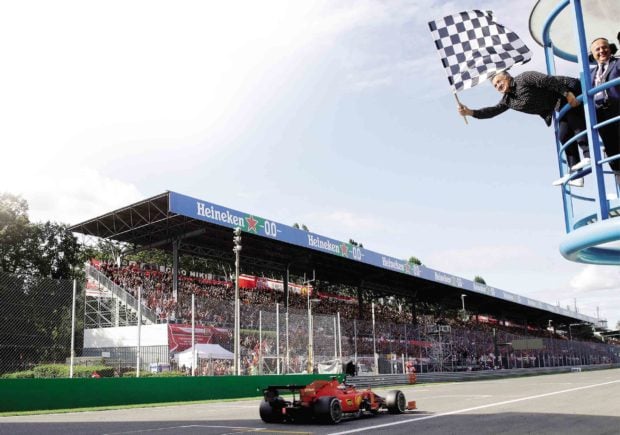 Winner Ferrari’s Monegasque driver Charles Leclerc celebrates with champagne on the podium after the Italian Formula One Grand Prix at the Autodromo Nazionale circuit in Monza on Sunday. AFP

Coming off his maiden victory at Spa-Francorchamps, Charles Leclerc was looking forward to another good showing at the Italian Grand Prix and, with the updated power unit of the Ferrari, Charles picked up from where he left off.

Driving impeccably to lead in two of the three practice sessions, left the rest of the field scrambling to catch up.
The Monegasque had the car that suited his driving style, it had the power and complementing aerodynamics, to pay huge dividends when it mattered.
Despite a chaotic Q3, Leclerc managed to grab pole position over Lewis Hamilton. In the second row Valtteri Bottas got the better of Sebastian Vettel, with Renault drivers Daniel Ricciardo and Nico Hulkenberg coming in 5th and 6th, respectively, to close out the third row.

At the race start, the #16 Ferrari of Leclerc held the racing line to muscle Hamilton onto the grass and retain the lead as they made their way across the lesmos. Valtteri Bottas, driving defensively, held on to third, while Sebastian Vettel was trying his best to stay in thick of the fight. Down the order, chaos ensued with Max Verstappen running into the back of the Racing point of Sergio Perez, prompting the Dutchman to pit for a new nose.

In lap six, Vettel, while out on his own, spun his car around at the Ascari chicane (this has now become a regular occurrence for the German), losing concentration while battling for position. Then to make matters worse, Vettel immediately rejoined the track, clipping the oncoming car of Lance Stroll and sending it onto the gravel trap. Race control deemed the move dangerous and slapped the #5 Ferrari with a 10-second stop go penalty that virtually ended Vettel’s chance for a good result at Monza.

Out in front, it was Charles who took hold of the race, resisting all attempts made by Hamilton and Bottas to dislodge the Ferrari from the top spot. Leclerc would block Lewis’ moves with a wider than usual placement of his car in the corners, and just outdrag the Mercedes at the straights. Charles Leclerc, driving like a seasoned veteran, soaked in all the pressure and take the checkered flag ahead of Valtteri Bottas and Lewis Hamilton. It was a back to back win for the Monegasque, and if he keeps driving like he did in Monza, it most certainly won’t be his last.

Charles has done what no other Ferrari driver has achieved since Fernando Alonso back in 2010: winning in Monza, in front of the Tifosi!

The grandstands erupted in jubilation as Leclerc stood atop the podium to receive the winner’s silverware. The Monaco and Italian anthem never sounded better than it did at Monza and Ferrari has found its new wunderkind.

In the drivers championship standings, Lewis Hamilton, by virtue of finishing third still holds on to the top spot with 248 points, and coming in second place is Valtteri Bottas with 221 points. Max Verstappen, who was on damage limitation mode all race long, took 6th place to retain third in the standings with 185 points. Race winner Charles Leclerc held on to 4th spot with 182 points, and rightbehind him, is his team mate Sebastian Vettel with 169 points.