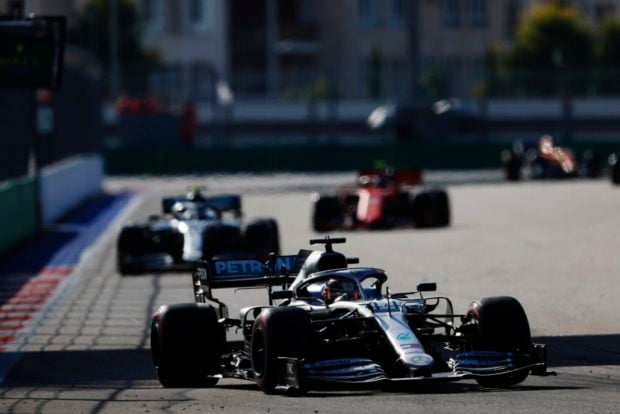 FERRARI’S Charles Leclerc secured his sixth pole position of the year — the most for any driver this season, and outqualified four-time world champion and teammate Sebastian Vettel for the 10th straight time — but lost Sunday’s 2019 Formula 1 Russian Grand Prix at the first corner. Vettel, starting from third on the grid, took off faster and outmaneuvered the pole-sitter.

Still, in the first half of the race Ferrari looked set to finish first and second and end Mercedes-AMG’s dominant run at the Sochi Autodrom. But Mercedes-AMG driver and championship leader Lewis Hamilton, starting beside Leclerc on the front row, benefitted from a virtual safety car period brought about by Vettel’s retirement.

This is how things transpired. Vettel leapfrogged both Leclerc and Hamilton at the first corner after the start, which as it turned out was a scenario Ferrari had planned for to defend against Hamilton. But when Vettel was asked to hand the place back to his teammate, he kept his foot down, to the protestation of Leclerc. It was “Multi 21” all over again — the 2013 Malaysian Grand Prix incident in which Vettel, then driving for Red Bull Racing, ignored an agreement and overtook teammate Mark Webber.

Leclerc pitted first and set a sequence of fastest laps, which were enough to undercut Vettel to regain the lead after Vettel pitted. But only a few corners after coming out of the pits Vettel was forced to retire after an energy recovery problem. The retirement brought out the virtual safety car, gifting Hamilton with pit stop that still allowed him to rejoin the race ahead of Leclerc and teammate Valtteri Bottas.

A crash by Williams’ George Russel during the virtual safety car period brought out a full safety car stint. Ferrari, reacting to Leclerc having dropped behind Hamilton during his first pit stop, brought in Leclerc again to give him the grippier soft-compound tires so he could attack not only Hamilton, but also Bottas, behind whom Leclerc had to slot in after his second stop. At this point, there were only around 20 laps before the race’s end.

As it turned out, Leclerc was not even quick enough to overtake Bottas.