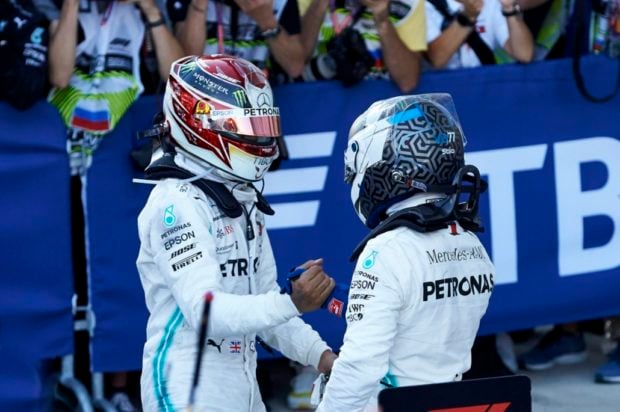 Mercedes-AMG drivers Lewis Hamilton and Valtteri Bottas congratulating each other for their 1-2 finish at the 2019 Formula 1 Russian Grand Prix.

WITH three consecutive race wins under its belt, Ferrari is looking competitive in the fight for the championship. Granted, Lewis Hamilton and Mercedes-AMG have a rather substantial points lead in drivers’ and constructors’ championship, but it is a deficit that is still mathematically possible to overhaul. That is, if Ferrari had not shot itself in the foot.

In Sochi for the 2019 Formula 1 Russian Grand Prix, it was the Ferrari of Charles Leclerc which grabbed pole over the Mercedes of Hamilton by about half a second. Slotting in third was Leclerc’s teammate Sebastian Vettel, with the second Mercedes-AMG of Valtteri Bottas moving to fourth place after Red Bull Racing’s Max Verstappen took a grid penalty for an engine change (all the Honda-powered cars had to take a grid penalty for swapping engines).

Leading up into Sunday’s race, Hamilton let it slip that he plans to get a tow from Leclerc’s Ferrari down the very long straight of the Sochi Autodrom. The move could give Hamilton the speed advantage to overtake the pole-sitter.

This fact was not missed by Ferrari engineers, who then hatched a plan to have Leclerc tow Vettel past Lewis (who was on the dirty side of the track), giving them a possible 1-2 in Russia. The move was the ideal strategy in order to combat the tire strategy put in place by Mercedes, who had both its cars start the race on Pirelli medium-compound tires, giving them a longer pit window.

The start went according to plan. Leclerc willingly towed Vettel down the straight. But Vettel had other ideas; he passed Leclerc to grab the lead as they reached Turn 1, contrary to what was agreed upon in the pre-race briefing. This didn’t sit down well with Scuderia Ferrari head Mattia Binotto and his staff, and, of course, with Leclerc, who dutifully followed what he was told to do but was left high and dry by the antics of Vettel.

Ferrari was on a crisis management mode as early as the second lap, instructing Vettel to swap places with Leclerc. Unfortunately, the four-time world champion did not oblige, and just kept his foot down. The Ferrari radio chatter kept coming, but all was ignored by Vettel.

As this was going on, Hamilton and Bottas were quietly shadowing the Ferrari duo, knowing full well that their tires will last longer than the race leaders.

On Lap 22, Leclerc was called in for his requisite pit stop. This was something not missed by race leader Vettel, who wanted to dive in the following lap to prevent the undercut. But, this was turned down by the Ferrari pit wall.

Ferrari brought in Vettel four laps later, on Lap 26. He came out behind Leclerc, saving Ferrari the embarrassment of asking the drivers to swap positions — which Vettel would most like again ignore. It was looking good for another Leclerc win until Vettel brought his Ferrari to a stop two laps later. A faulty MGU-K was the culprit. With Vettel parked on the runoff area, race stewards then had to activate the virtual safety car (VSC) as the marshals retrieved the stricken Ferrari. This ultimately gave a free stop for both Mercedes cars and the eventual win.

Hamilton, who had a relatively quiet race from that point on, took hold of the lead and, with Bottas trailing, had a “buffer” to fend off any attacks from Leclerc. Hamilton was so comfortable with his setup that he even managed to pound in fast lap times one after another. Mercedes benefitted largely from its tire strategy, which allowed their cars to run longer, coupled with the VSC period and the Ferrari “tussle,” to remain undefeated in Russia.

Hamilton, who only had a marginal chance of winning at the start of the race, crossed the line to take his 82nd career win and the sixth-straight victory for Mercedes-AMG Petronas in Sochi. Since 2014, no one other than the Brackely team has ever won in Russia.

Hamilton further pads his lead in the title chase by winning the race and setting the fastest lap time — he now has 322 points. Seventy-three points back is Bottas, with Leclerc taking hold of third with 215 points. Verstappen with 212 points retains fourth ahead of Vettel, who has 194 points.