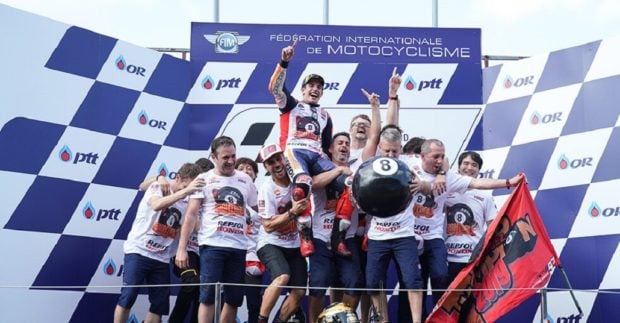 Marc Marquez and the Repsol Honda team celebrate on the podium in Thailand.

ALL year long Repsol Honda’s Marc “The Phenom” Marquez consistently out-raced his competitors and, coming into the Thailand round of the 2019 MotoGP season, the Spaniard only needed to score two points more than his closest rival, Ducati’s Andrea Dovizioso, to grab the 2019 riders’ title in the premier class despite having four more races left in the calendar.

Marquez was poised to take the title in the premier class as he arrived at the Chang International Circuit in Thailand.

Before the Thailand round, Marquez has already won eight races this season. The 26-year-old rider took top honors in Argentina, Spain, France, the Catalan GP, German GP, Czech GP, San Marino and in Aragon. Marquez has scored 13 podiums, with nine pole positions and nine fastest laps. After winning in Thailand, Marquez now has eight world titles to his name, six of which in MotoGP.

Despite a huge high-side spill in Thailand grand prix’s practice session, which would have taken out any other rider, Marquez was able to come back for qualifying, pain and all, to grab P3 just behind the Yamahas of Maverick Vinales and poleman Fabio Quartararo.

At the start, Marquez’s Honda vaulted past Vinales, edging the Yamaha rider out even before reaching Turn 1. Quartararo, who likewise had a good start, fended off the initial attack of Marquez. Quartararo was on the verge of taking his first win in MotoGP — and maybe even extending the title battle between Dovizioso and Marquez.

The two front runners kept consistent lap times; just a hair over one minute and 31 seconds each and every lap. Marquez was shadowing Quartararo all throughout the race. The duo were so fast they even managed to lap the ailing Jorge Lorenzo in the second Repsol Honda halfway into the race.

Even if Marquez finished behind Quartararo, he still would take the title. But, in typical Marquez fashion, “The Phenom” threw all caution to the wind and wanted to win in style. The Honda can be seen shadowing the Yamaha all race long, trying to find a way past, biding his time, knowing full well that he could grab the lead in the closing laps.

Then, as expected, with just two laps to go, Marquez made his move on the inside of Quartararo, with the Spaniard making it stick to grab the lead. And, even with a late charge from Quartararo, Marquez held on to win the PTT Thailand Grand Prix.