While the term GT or gran turismo is oft abused by PR and marketing blurbs, it best fits the Cayenne’s wide ranging breadth of abilities.

In Germany, you can pretty much drive up and down the country via their extensive Autobahn. Hard core drivers will easily do a 700-1,000 kilometer round trip in 24 hours as it is more convenient than flying in from city to city. Same thing when riding on a train, according to some of my German hosts in the past, as a car allows you the freedom to come and go whenever you please, almost anywhere you want to or need to go. In fact, driving down to Northern Italy is also a popular weekend driving destination for many Germans. That’s a 1,500-2,000 kilometer round trip. In a single weekend.

Key to all this driving, is a fast yet comfortable, spacious yet engaging vehicle. Enter, Porsche’s over-achieving Cayenne. When it was launched in 2002, purists cried out and claimed the end was near. After almost two decades, and three generations later, Porsche, as a car company is as vibrant and as profitable as ever, thanks in no small part to the Cayenne.

Owners of these cars very rarely get the chance to truly enjoy them on a long-drive. But one Saturday morning, we received an invitation to drive out and see Mr. Tom Matano, the designer of the original Mazda Miata MX-5 who was flying in. We’d drive to Villa Escudero in Tiaong, Quezon Province at 9a.m. for a short program followed by brunch, 74 kilometers away from my home. From Villa Escudero, I needed to head up to Tagaytay afterwards, 64 kilometers away. A monstrous traffic jam was waiting for me to get to my final 5 p.m. meeting in Ayala, Alabang, another 55 kilometers away from my location in Tagaytay, before finally heading back home to Mandaluyong, 30 odd kilometers more. That’s a total of 223 kilometers. Germans would scoff at this distance as they can easily cover this in under 2 hours while following their speed limit, but factor in our monstrous traffic jams, and the whole scenario changes.

Early morning, and the Cayenne is a soothing, relaxing vehicle. The single turbocharged 3.0 V6 engine delivers a very healthy 340hp and 430 Newton-Meters of torque, delivering power to all four wheels via an 8-speed Tiptronic automatic and active all-wheel drive system. It’s also very fuel efficient on the highway, cruising at right around 100km/h: 12km/liter isn’t too shabby, considering the Cayenne’s engine is still tight and new with a shade over 4,000 km’s under its belt. We meet at Petron KM44 and head out for the new bypass road on Candelaria. The fast and flowing roads give me a chance to put the Cayenne in Sport mode, stiffen up the suspension, tweak the shift algorithm and go flat-out as I tried my best to keep up with our lead car, the Miata MX-5 RF 30th Anniversary Edition in bright orange. The Cayenne’s heft made its presence felt indeed, but the standard adaptive air suspension tried its very best to defy Newton’s Law’s of Physics while providing a compliant ride from the 20-inch wheels and staggered Pirelli P-Zero tires. Paddle shifters helped rein in the big heavy SUV at speed, engine-braking as needed while the awesome Porsche brakes, a true hallmark of the brand gave fade-free operation with the best in modulation and feel. 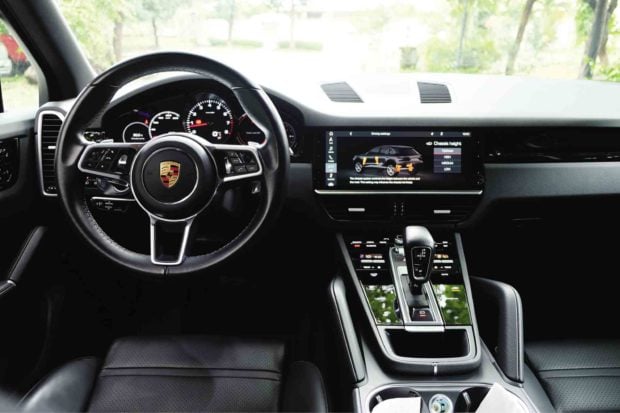 Upon reaching Villa Escudero, meeting the legendary Tom Matano and a quick bite, our next challenge was a 3-hour traffic drive to Tagaytay. Traffic causes anxiety and stress, especially when riding a fast, powerful car which further agitates you. Thankfully, the Cayenne can do the mundane stuff very easily and capably as well. With my mobile phone connected via Apple Carplay to the Porsche Communication Management infotainment system, we navigated our way as best and as easily as possible through many of the back-roads of Quezon, Laguna and even Batangas while listening to music streamed via Spotify. Our last challenge for this leg of the trip was to snake our way up to Tagaytay, climbing up the infamous Tagaytay-Talisay Road, with its extreme hairpins, narrow sections and blind corners coupled with multiple rocks and debris on the roads. Sport Mode really made for an exciting attack on the uphill climb to Tagaytay. But the Cayenne is a pretty safe with seven airbags, ABS-EBD brakes with brake-assist, traction / stability control, and of course Porsche’s Traction Management System.

From Tagaytay a few hours after, we made mincemeat of the winding Sta. Rosa Tagaytay Highway, past Nuvali, onto Eton Exit and back onto SLEX to rush to Tagaytay to make my 5 p.m. meeting. Skyway Extension Construction on the northbound lane has made this otherwise 35-minute commute into a hellish 3-hour drive, but again, the Cayenne, in normal mode, with all its active safety features kept us relaxed inside the car. The active automatic wipers and headlights would activate intermittently to provide a clear view ahead, even if traffic was moving at a proverbial snail’s pace. Upon reaching Alabang, I thankfully found parking at Audi Alabang, where I went to my meeting at the coffee shop adjacent to it. Meeting and all work finished, it was time for the drive home, which took another 2.5 hours. Easy access to Skyway made the SLEX portion fast, but EDSA was the real nightmare as it took almost two hours alone to cover the stretch from Magallanes to Ortigas Ave. 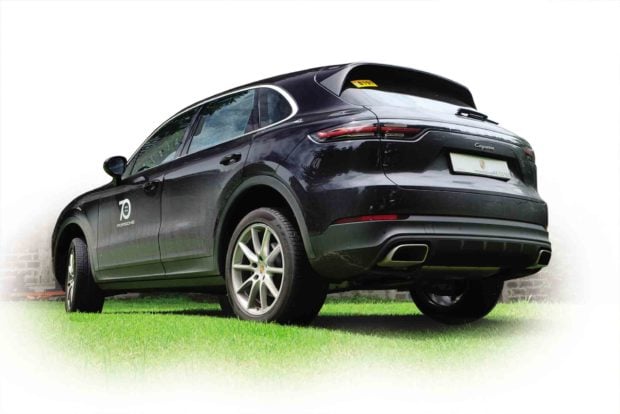 The next day, I was tempted to do a bit of off-roading just for laughs, as a dedicated Off-Road Mode is available too. Change the tires to proper M/T’s and the suspension can raise itself by an additional 60MM from its lowest setting, giving you more off-road ability to tackle the rough stuff. The 525mm of flood fording depth, together with the 240mm of ground clearance isn’t great, but more than enough for most people looking to do a bit of exploring off the beaten path.

Even after spending a combined 9+ hours inside the Cayenne, the car felt smooth, I felt relaxed, and left with a far deeper appreciation of the Cayenne’s long-distance touring abilities. While the term GT or gran turismo is oft abused by PR and marketing blurbs, it best fits the Cayenne’s wide ranging breadth of abilities. Fast, fun, and amazing on long drives. Maybe next time, we’ll take the Cayenne up to Pagudpud.