SLEx traffic back to normal by Dec. 1 – Ramon Ang 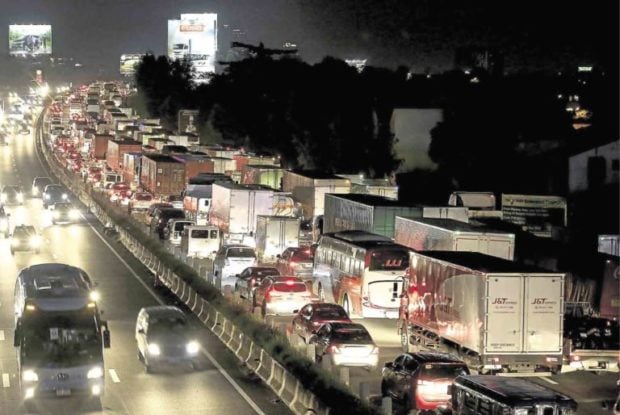 Heavy vehicular traffic stretching to 24 kilometers hounded motorists on the night of Sept. 26, 2019, on the South Luzon Expressway, from Alabang to the Eton exit in Santa Rosa City in Laguna province. (Photo by Richard A. Reyes / Philippine Daily Inquirer)

Ang made the announcement amid the slow-moving traffic situation along SLEX due to the construction of the P10-billion Skyway extension project.

Three lanes on SLEx became two lanes because of the digging for a post there, he explained. Those three lanes will be open again by Nov. 30, when the construction in the area will end.

According to Ang, once the project is finished, traffic in the area will no longer be a problem for the next 10 to 15 years.

“By December 1st, there will no longer be heavy traffic in the area — northbound and southbound. I promise you that,” Ang said.

Earlier, Senators Grace Poe and Sherwin Gatchalian suggested the lowering of toll during the construction of the Skyway extension.