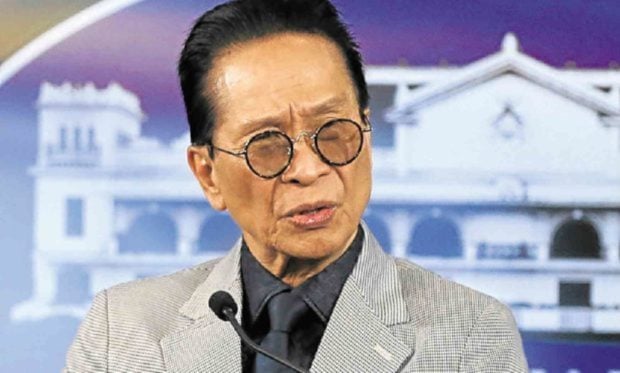 MANILA, Philippines — Presidential spokesperson Salvador Panelo on Monday turned down the dare of a commuters’ group, Kongreso ng Mananakay, for him to take public transportation for six months.

“That doesn’t matter. I only gave in to shove it in their faces that it’s not true that we have not experienced commuting using public transport,” Panelo told reporters at Malacañang.

He also stressed that government officials did not have to ride in public utility vehicles (PUVs) to see the suffering of ordinary Filipinos.

“Even if you don’t ride one, you will still see it every day, when you see queues at jeepney or bus stands. You will see them struggling to hail a ride, especially during rush hour. There’s no need to accept any further challenges,” he said.

As for Iligan City Rep. Frederick Siao’s proposal to require government officials to ride in PUVs at least once a week to reduce the number of private vehicles on the road, Panelo said there was no problem if the goal was to “share sympathy” with the public.

But if the purpose was to make them experience the horrors of public transport, it was not necessary, he stressed.
No stranger to riding in PUVs

Panelo maintained that he was no stranger to riding in PUVs, and that other Cabinet officials like Transportation Secretary Arthur Tugade and Finance Secretary Carlos Dominguez III had all experienced taking buses and jeepneys.

“We all went through that. We experienced fighting to ride a jeepney, even the bus,” Panelo said, quipping that Foreign Secretary Teodoro Locsin Jr. was perhaps the only official who did not go through a similar experience.

At the same time, he called on critics to stop issuing commuting challenges and propose solutions to the traffic and transport problem instead.

“Like [Vice President] Leni [Robredo]. Stop with the criticism. She says, ‘Admit that there’s a crisis.’ I already said there’s a traffic crisis,” he said.

Robredo, in her Sunday radio program, had said the first step to solving the problem was to acknowledge it.

Barry Gutierrez, Robredo’s spokesperson, responded by saying that she had long been giving advice, not just on solving the traffic problem, but in other areas as well.

“The question is, after more than three years in office, why is it only now that the government is looking for solutions to the traffic problem, which they had promised would be easily solved then?” he said in a statement sent to reporters.

Panelo earlier drew flak for saying there was no mass transport crisis in Metro Manila despite the frequent breakdown of train lines and the worsening traffic problem, resulting in a longer commute for those taking PUVs.

Last Friday, after accepting the commuting challenge issued by Bagong Alyansang Makabayan secretary general Renato Reyes, Panelo took almost four hours to get to Malacañang from his house in Marikina City. —By: Julie M. Aurelio, With a report from Jhesset O. Enano