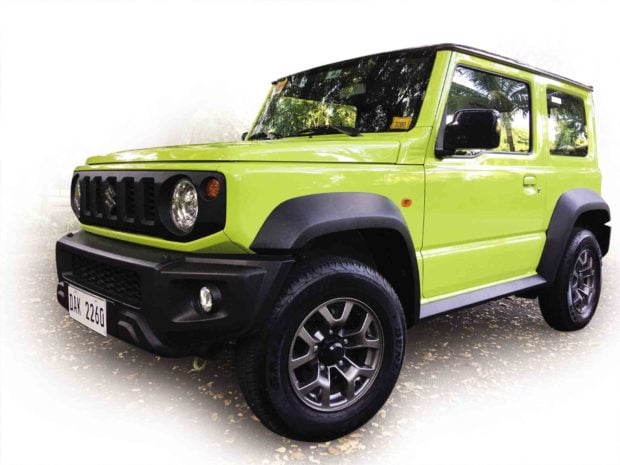 You will never see anything quite like the 2019 Suzuki Jimny on the road.

It is the smallest, lightest dedicated 4×4 sport utility vehicle in existence today.

Launched on the global market late last year in time for the 2019 model year, the fourth generation Suzuki Jimny All-Grip Pro arrived on the Philippine scene on March 4, 2019.

A bit of background: Its predecessor, the third generation Jimny, was launched in 1998 and continued to be sold until the advent of the new iteration in 2018.

The 10-year gap between the 1998 and 2018 models must have generated much anticipation among Jimny cult followers and online fan clubs worldwide.

They were not disappointed when Suzuki rolled out the sturdiest and most charming Jimny ever.

The all-new Suzuki Jimny combines authentic off-road capability with a simple yet appealing design that brings a smile on the face of everyone who sees it.

The 2019 Jimny All-Grip Pro is built on the four key features that define an authentic off-road vehicle:

2) Three Angles—The Jimny can climb over big rocks and steep hills without scraping its bumpers or underbody because of its 37-degree approach angle, 28-degree ramp breakover angle, and 49-degree departure angle. Because of its 210 mm ground clearance, the Jimny can cross rivers and floods.

3) 3-Link Rigid Axle Suspension with Coil Spring—The new Jimny has a long stroke, 3-link suspension that is teamed with rigid full wheel axles on both front and rear to support strong traction on uneven terrain, which makes it more robust than the independent suspensions of many of today’s SUVs. 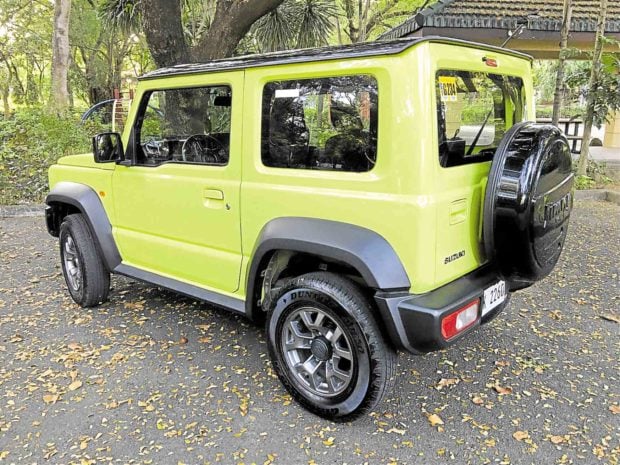 Aside from the above, the new Jimny is equipped with Hill Hold Control, Hill Descent Control, and Brake Limited Slip Differential (LSD) Traction Control.

Thirty millimeters shorter, 45 mm wider and 20 mm taller than its predecessor, the all-new Jimny looks retro by retaining the nameplate’s traditional square body and the front grille with five vertical openings, plus iconic round headlamps inherited from past models, but this time using LED technology and headlight washers.

Its bonsai dimensions allow the Jimny to tackle narrow mountain trails and dense forests while its light weight (1,100 kg) lets it drive through mud, over sand dunes and up slippery slopes where larger and heavier SUVs tend to bog down. Its minimum turning radius of 4.9 meters, makes the Jimny easier to maneuver in tight urban spaces as well.

Body cladding, flared wheel arches, molded black bumpers and side sills help to keep the body panels scratch-free, while gutters along the flat roof prevent rain water from cascading into the cabin when the doors or the tailgate are opened. 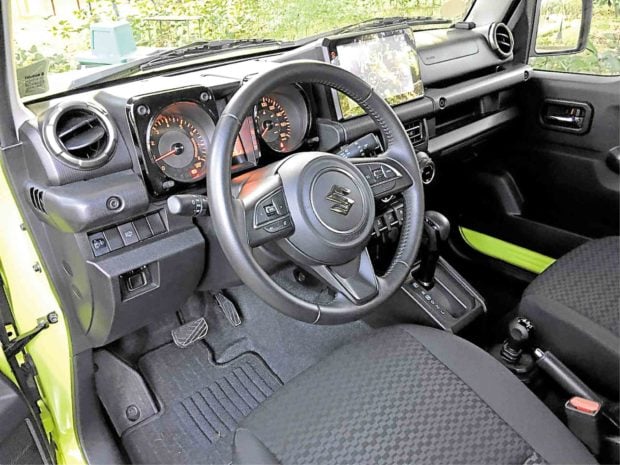 Every detail in the cockpit is crafted to keep the driver focused on the road and also to support off-roading.

Caution: The tailgate swings open sideways and the spare tire is mounted on it, so when reverse parking, you should make allowance for extra space behind. Being minimalist, the Jimny is not equipped with reverse camera or rear parking sensors to assist you in this aspect.

People who believe that less is more will like the Jimny’s simple, all-black, no-frills cabin.

It is no-nonsense, spartan, utilitarian inside. Every detail is thoughtfully crafted to keep you focused on the road and also to support serious off-roading.

The scratch- and stain-resistant grained finish of the instrument panel as well as its horizontal design help you to recognize the angle of the Jimny in rough instantaneous terrain.

The leather-wrapped steering wheel has cruise control and adjusts for rake, but not for reach.

Although the dash is made of hard black plastic, it feels solid, not brittle. Hard plastic throughout, rubber floor mats and extensive use of zinc-coated steel make the interior easier to clean, especially the undercoated floor which can be hosed with water after an off-road adventure.

The front seat cushion frames are wider and taller than the preceding model’s for improved shock absorption. The manually adjustable seats are comfortable, but are not wide and supportive enough for off-roading or long trips.

Headroom front and rear is generous, but legroom at the rear is cramped.

In a vehicle as micro as the Jimny, you cannot expect ample storage or luggage space.

Storage space is scarce in front, consisting of a floor console tray with two small cupholders between the front seats and a receptacle for small items like a mobile phone.

The glove box is small and a center console tray under the dash is available only in the variants with automatic transmission.

The door pockets (the Jimny is a two-door vehicle) are too narrow to accommodate anything bulkier than a post card. 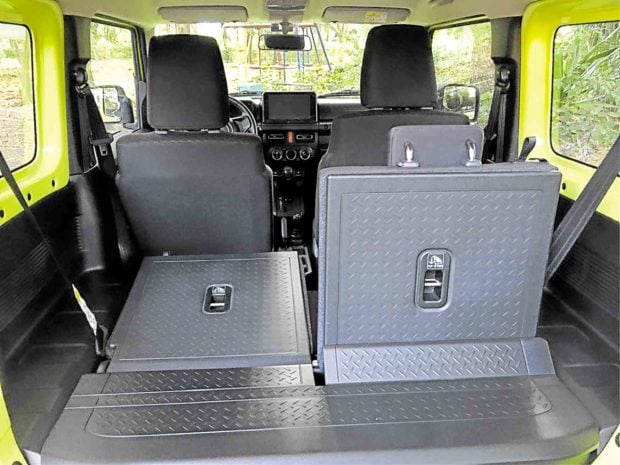 Both 50/50 split rear seat backrests can be folded flat to increase cargo space from 85 to 377 liters.

All the seats can be folded nearly flat to increase luggage space. When the front seats are folded together with the 50/50 split folding rear seats, a makeshift bed is formed – great for campers.

When the rear seats are folded, cargo room expands from 85 to 377 liters. Behind the rear seat, a detachable luggage box for small items and a tool box underneath the cargo floor add to the storage space.

ON THE ROAD WITH THE JIMNY

The new Jimny is equipped with a naturally aspirated 1.5-liter, 4-cylinder engine that produces 100 hp and 130 Nm max torque. It delivers stronger torque across the rpm band than the 1998 model’s 1.3-liter engine.

Driving the Jimny on paved roads feels very different from driving a small, car-based SUV because of the Jimny’s ladder frame chassis and rigid axle suspension. Expect more vertical and bouncy body movements although Suzuki fitted eight revised rubber bushings between the body and the frame to refine the riding experience.

Instead of rack and pinion steering, which is found in most modern cars, the new Suzuki has electrically assisted recirculating ball steering that makes steering rather vague in either direction.

The plucky little engine revs gruffly and the tranny whines when the car hits expressway speeds, but then the Jimny was built for off-roading, not for motor sport.

Being an authentic 4WD off-roader, the Jimny deserves to be tested in the rough-and-tumble boondocks by an expert all-terrain driver—which I am not. Thus, on the premise that most 4×4 SUV buyers use it on-road more often than off-road, this writer’s comments are limited to on-road.

The Jimny is equipped with dual front airbags, Electronic Stability Program , Total Effective Control Technology (TECT) which means its structure efficiently absorbs and disperses energy in the event of a collision, and Pedestrian injury mitigating body which means that its hood and surrounding parts absorb impact to mitigate head and leg injuries in case of a collision with a pedestrian.

The new Suzuki Jimny is a tough but cute little 4WD rascal that can outperform bigger SUVs in serious off-roading excursions precisely because it is so lightweight, tiny and square.

Its uniquely cheerful character delights young and old alike, and gives its own reason for being: raison d’etre.

Its minimalist but sturdy exterior and interior design adheres to today’s decluttered ethic.

Its utter lack of creature comforts appeals to individuals who eschew the corporate culture perpetuated by midsize executive sedans.

Neither is it a family carrier, which is just fine with independent young outliers.