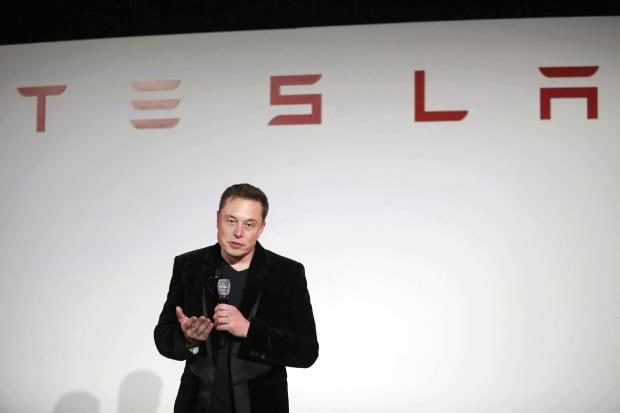 In this photo, taken Sept. 29, 2015, Elon Musk, CEO of Tesla Motors Inc., talks about the Model X car at the company’s headquarters, in California. In tweet on Monday, July 3, 2017, Musk announced that the Model 3 car for the masses will go on sale on Friday, July 7. (Photo by MARCIO JOSE SANCHEZ / AP)

From the honks of car horns to the beeps of modern vehicles, the road has been witness to the cacophony of sounds cars make daily — but these may soon be joined with fart sounds, thanks to Elon Musk.

“Customized horn and movement sounds (coconuts being one, of course) will be coming to Teslas soon,” the Tesla CEO announced through Twitter on Oct. 7. It is a feature netizens seem excited about as Musk’s tweet has gained over 2,700 likes and 46,000 retweets, as of writing.

The “coconut sounds” appear to be inspired by a scene where hoodbeats were imitated by smacking two coconuts in “Monty Python and the Holy Grail”, a favorite comedy cult classic of Musk, as per Teslarati’s report on Oct. 6.

Through emojis, Musk said fart sounds and goat bleats will “of course” also be available.

As if aiming for a true nature experience, Musk approved with a simple “sure” Twitter user @teslaownersSV’s suggestion that the cars “have jungle and rainforests sounds” too.

Musk also said he “will consider” allowing Tesla owners to create their own horn and movement sounds, after one Twitter user @JudaMeg asked, “may we (sic) can just upload our own sound clips?”

Without knowing what Musk will add to this already outlandish collection of sounds, and what Tesla owners may upload themselves, it may be safer to assume that the roads in the United States may become — and sound — crazier.

This feature is possible through Tesla’s noisemakers, which are designed to emit sounds for electronic vehicles (EV) moving below 19 mph to alert other drivers, as per report. Tesla Model 3 cars built since September 2019 have been equipped with noisemakers.

The U.S. National Highway Traffic Safety Administration’s mandate on requiring hybrids and EVs to make noise when moving at a slow pace will allow manufacturers time to comply until Sept. 1, 2020.

With this, Musk appears to actually be ahead of the mandate, but seemed to have had a little fun in complying with the law. JB – by Ian Biong