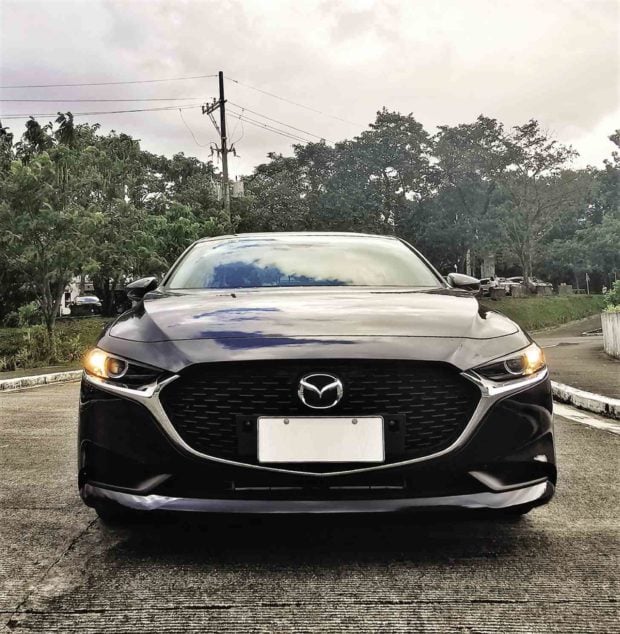 Mazda3: The carmaker’s most successful model in the Philippines.

Auto experts have been describing Mazda as the “David amongst the Goliaths,” the giants here being the likes of Toyota and Nissan. And it’s hard not to root for the “little guy.” Apparently, Mazda has been relishing its underdog role, coming out with particularly bold and creative expressions of its engineering and design marvels over the years.

And just like the biblical David, Mazda consistently hits the spot with those attempts. It was most evident in the recently concluded 2019 Tokyo Motor Show when Mazda showcased the MX-30 electric vehicle crossover.

The MX-30 EV focuses on driving enjoyment, as much as ecomobility, with its e-Skyactiv electric drivetrain. Of course, this halo car proudly flaunts its reason for being, its constitution, made with sustainable materials such as recycled bottles and cork trim.

The MX-30 could very well be among the first showcases of Mazda’s “Sustainable Zoom-Zoom 2030,” its vision for technology development that sets out how Mazda will use driving pleasure, the fundamental appeal of the automobile, to help solve issues facing people, the earth and society. This vision was put on paper in August 2017 (a decade after the original “Sustainable Zoom-Zoom” was laid out). 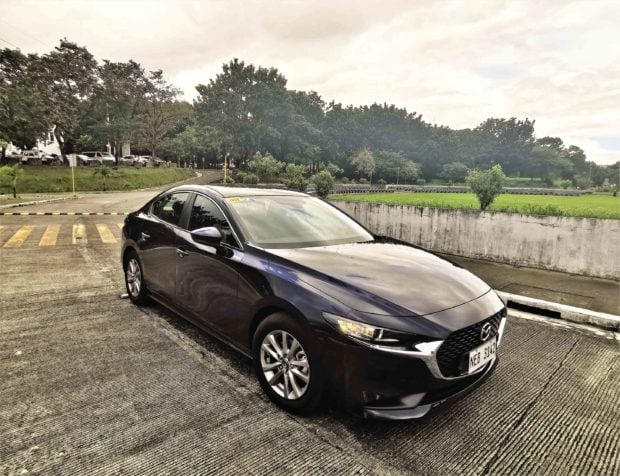 So, you see, there’s a lot about Mazda its fans here in the Philippines can look forward to even in the midst of climate change. But for now, the Mazda that’s ruling local roads still run on fossil fuels, albeit as efficiently and as powerful as how its engineers designed them.

One looker of a Mazda compact sedan that could most likely be your daily driver is the Mazda3 Elite. It has all the curves and bold exterior touches of a Mazda sedan–it looks in motion even when standing still.

The Mazda3 Elite is intended for a young market that can afford premium sedans, thus, youth is mixed with sophistication in this classy cocktail of an auto. The Mazda3 series—most especially its Premium variant sibling—was also created to be an alternative to costlier luxury subcompacts. So, you can say that this is the gateway model of luxury compact sedans, yet still very much associated with the spirited “zoom zoom”. 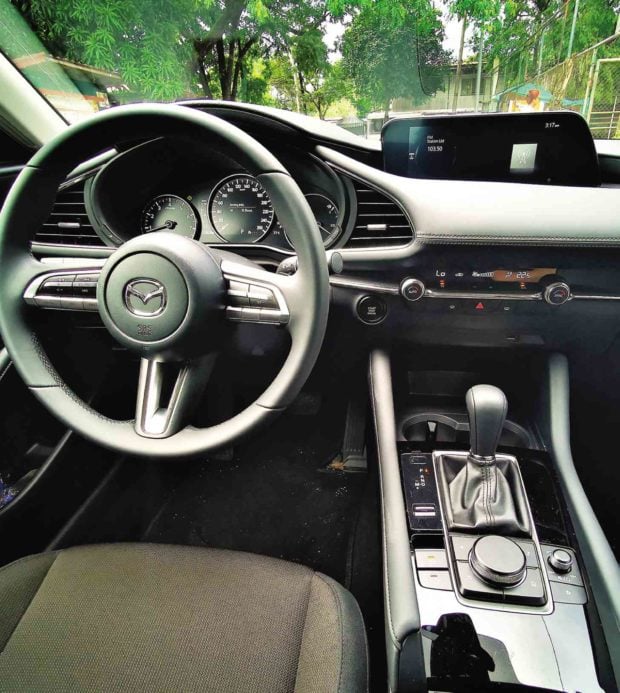 Jinba-ittai: Feeling of oneness between car and driver.

The Mazda3 Elite is the base model of the two sedan versions (the other is the Premium), along with the 5-door sportback or hatchback, which has three other variants, the Speed, Premium and Elite. The Elite sedan, which I had the opportunity to drive, is powered by a 1.5-liter DOHC SkyActiv-G engine with six-speed automatic transmission (with sport mode) that produces 109hp and 146Nm of torque. The Premium sedan has the 2-liter engine that produces 152hp and 200Nm of torque.

Not surprisingly, the Mazda3 series has been the most successful Mazda model in the Philippines, with about 19,000 units sold since its 2004 introduction. This popularity is a reflection of its global acceptance. Worldwide, over 6 million
Mazda 3s have been sold since its 2003 launch.

As one can see in the images splashed here, the Mazda3 wears its potential energy on its sleeve. The “Kodo: Soul of Motion” design, seen in everything from the Mazda2 to the MX-5, brings life to the car, imbuing it with a sense of speed. And with the “Jinba Ittai” design philosophy fusing “man and machine,” the design, drive and ride dynamics of the Mazda3 are unlike any other.

The unusual textured surface has been designed to convey fluid movement, even when the car is stationary. The Mazda3 creators have been able to “transfer the makers’ and artists’ energies” through its
design. 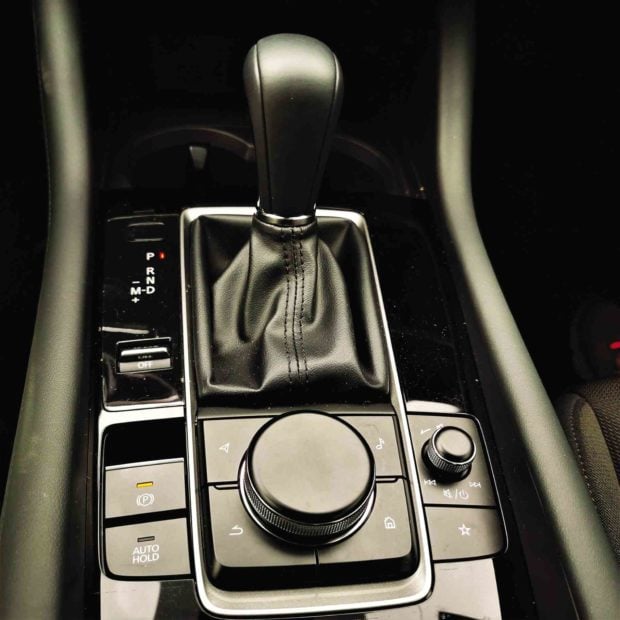 Packed in creature comforts in interior amenities, infotainment and instrumentations.

According to Mazda vehicles official Philippine distributor Bermaz Auto Philippines, the Mazda3 is its first model to feature the more mature “Evolved KODO design language,” first introduced in the RX-Vision concept car at the 2015 Tokyo Motor Show. The theme of development for the all-new Mazda3 was to make it “an object of universal desire.”

No doubt, the 2-liter Mazda3 Premium would produce a more exhilarating ride. But the Mazda3 Elite still provides more than my day’s thrill quota. And I was still happy at my fuel readings after driving in “sport” mode.

’Driver and car are one’

Its “Jinba-ittai” lies at the heart of every human-machine interaction, reflecting the feeling of oneness between car and driver. It sprung to life most especially when I drove on “sport” mode. The sedan handles the twists excellently, as when I drove it on the meandering Zapote Riverdrive and on the C5 Extension in Paranaque and Las Pinas cities, going exactly where I like and how I like it. Tetsu Kasahara, assistant manager of Mazda’s Chassis Dynamics Development Department of the Vehicle Development Division, once said: “There was a moment when I was driving that I suddenly no longer felt the existence of the car. I thought, this is it.”

It was a pleasant surprise that, even in spirited driving, the engine was efficient enough to produce 17 km per liter on highway runs. An even more welcome sight was the excellent and compassionate choice of fabric as seat material. I was informed that the Mazda3 Elite’s fabric seats is complemented with faux leather. For the production of the car, Mazda developed its own grain pattern with the faux leather used.

For an entry-level Mazda3, it really packs in the creature comforts in its interior amenities, infotainment, and instrumentations.

Is this Mazda 3 the evolutionary step leading to the carmaker’s “Sustainable Zoom Zoom 2030” vision? It sure looks and feels that way, as the Mazda3 has successfully achieved highly efficient internal combustion engines, significantly reducing its C02 emissions. In my view, the next evolutionary step would then be to combine this engine with EV technology, the kind that powers the MX-30.

Mazda has also developed a new resin for the plastics it uses in the bumper to make them thinner and 20 percent lighter, the less weight subsequently consuming less power. Mazda 3 has also been one of the models to introduce a lightweight wiring harness. These have been all in keeping with its “Sustainable Zoom-Zoom,” formed in March 2007, announcing Mazda’s long-term vision for technology development. The basic policy of this vision is to “provide all customers who purchase Mazda vehicles with driving pleasure, as well as outstanding environmental and safety performance.”

The only hurdle to enjoying the Mazda3 Elite is the price, but it should be no problem for its intended market. At P1.295 million, the Mazda3 Elite stays true to its buyers’ sophisticated profile.

David may be the underdog, but he does ask a hefty price from the villagers to battle with the giants.